50 Interesting Facts About Belarus That Will Blow Your Mind | Kidadl

50 Interesting Facts About Belarus That Will Blow Your Mind 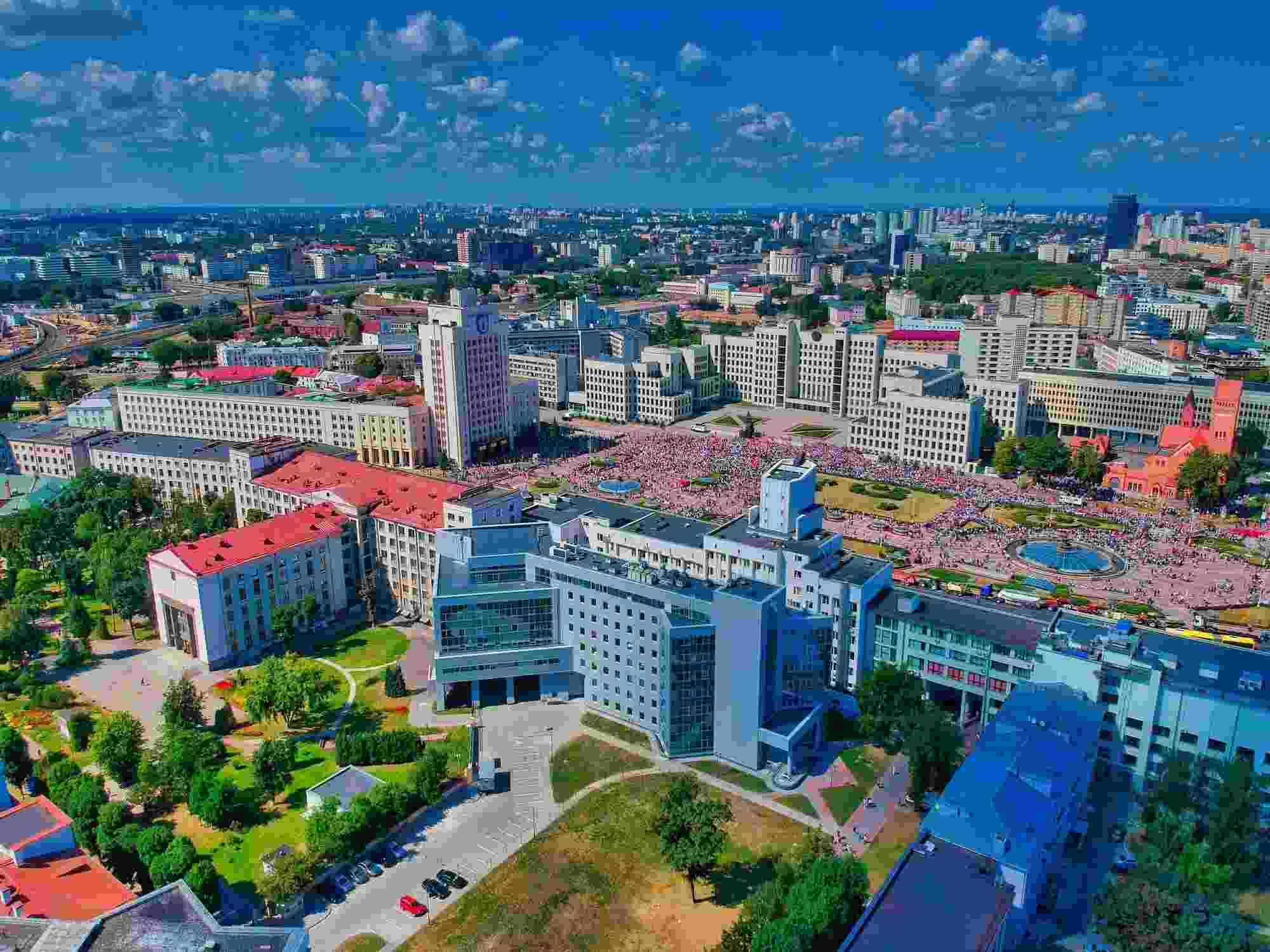 Have you heard of Belarus?

Probably not! Many people will not be able to even locate it on a map.

A landlocked country, Belarus is situated in Eastern Europe. It is slowly garnering attention among tourists for its ease of access, artsy and hip culture, old-growth forest, and historical marvels. There is a lot to explore in this country, right from its abundant national parks to folk art festivals. The 9.3 million population of Belarus speaks Trasianka, which is a mix of Belarusian and Russian. The Belarus flag has two colored stripes, red and green, with a pattern of red and white on the hoist.

Before planning a visit to this country, do check out these interesting facts. For example, when you visit Independence Avenue in Minsk, you should know that it is the longest street in the country. Dzyarzhynskaya Hill, is the highest point in the country being 1135 ft (345.95 m) above sea level.

The rest of Belarus is more of a plain. The sudden mountain-like structures you encounter are actually made due to the salt mining process. The parents of the famous Ralph Lauren immigrated to the U.S. from Belarus. Expand your geographical, cultural, and historical knowledge of Belarus with these interesting facts.

Where is Belarus located in Europe?

Belarus is an East European country bordered by five other countries. This landlocked country was the smallest of the Slavic Republics that gained independence in 1991.

Previously referred to as Belorussia or White Russia, Belarus is a landlocked country situated in Eastern Europe. The country is about one-third the size of its neighbor, Ukraine.

Apart from Ukraine, Belarus is bordered by four other East European countries, namely, Poland, Lithuania, Latvia, and the Russian Federation. It is bordered in the east and northeast by Russia, in the south by Ukraine, in the west by Poland, and in the northwest by both Lithuania and Latvia. Its strategic location makes it an important route for trade and transport between countries in Europe and the Commonwealth of Independent States (CIS).

It is a medium-sized country, covering a land area of around 80,154.81 sq mi (207,600 sq km). Belarus is the 13th largest country in Europe with regard to land size. The country is divided into seven administrative regions, namely the Brest Region, Gomel Region, Grodno Region, Mogilev Region, Minsk Region, and Vitebsk Region. The largest city in Belarus is the capital city, Minsk.

More than 40% of Belarus is covered with forests. In fact, it is home to the oldest forest in Europe, the Belovezhskaya Pushcha. This forested area is home to rich floral and faunal biodiversity. It has the largest population of the rare European bison, which is Belarus' national animal.

Some of the oak trees in the forest are about 600 years old. Other old-growing trees to be found in Belovezhskaya Pushcha are ash, pine, black alder, and rare grass plants. Woodpeckers of various kinds, lesser spotted eagles, and more birds can be spotted in this primeval European forest.

What is Belarus famous for?

Belarus is famous for a number of things, starting from its rich forested landscape to its famous residents. Here is a look at the things that make Belarus a hidden jewel in eastern Europe.

Belarus is a beautiful and clean country. It may be part of the European plain, but much of it is heavily forested. In fact, the green stripe in the Belarusian flag symbolizes the country's green forests. Surrounded by abundant natural vegetation, Belarus is referred to as the 'Lungs of Europe'. These primeval forests are home to rare European bison (the largest animal) and other wild animals. Another natural jewel, Naroch Lake, is the largest lake in Belarus and is part of the Narochansky national park.

The National Library of Belarus is known for its unusual architecture. The building has 23 floors, complete with a viewing deck, and is popularly referred to as 'The Diamond of Knowledge'. Another architectural marvel is Independence Avenue, which is a really long street in Minsk.

Sweets! Belarusian sweets are quite famous in Europe. Zephyr (a marshmallow-like sweet candy), chocolate candies, sguschenka (sweet condensed milk), and glazed cranberry and curd bars, are sought after by both locals and visitors.

Belarusians are known for their hospitable culture. The Belarus population is a lover of sports, potatoes, pancakes, and art.

Belarus is a country that takes sports seriously. From football to ice hockey, the Belarusian population watches sports in the country's 23,000 venues. Tennis Grand Slam winner, Victoria Azarenka is also from Belarus.

The country loves consuming potatoes. The Belarusian population has come up with about 300 potato recipes, with draniki (grated potato pancakes) being the favorite. To meet the country's insatiable appetite for potatoes, food scientists in the country work hard to invent varied potatoes.

The last week before Lent is a special occasion for the Belarusian population. Known as Maslenitsa Week, friends and family gather together and cook pancakes. And these pancakes come with some of the most creative and mouthwatering sweet or savory toppings, like a mushroom stew.

The streets of Belarus are not just clean but also filled with street art. The country also hosts many folk art and culture festivals across its regions. Some notable festivals include the national festival of folk arts, Beraginya, the folk arts festival Napeu Zyamli Mayoi (The Song of My Land), and the folk arts and craft festival Dribinskiye Torzhki.

Present-day Belarus and its culture and identity are a result of regional forces. As a former USSR or Soviet Union member, Belarus gained independence only in the year 1991.

The early history of Belarus shows that the Slavic tribes inhabited the first places where the Slavic language was spoken. These tribes formed local regions, which all fell under the first Slavic state (Kievan Rus) formed in the ninth century. When the Mongols invaded the region in 1240, they dissolved Kievan Rus.

The Belarusian towns then joined the grand duchy of Lithuania. The good thing was that many of the conquered territories achieved autonomy during the 13th and 14th centuries. It was at this time Belarus language started taking shape. Then, during the Jagiellon dynasty in 1386, the Polish and Lithuanian ruling houses joined hands. During this period, a lot of civil and property reforms took place. Then came the Russian rule. Hence, Belarus throughout history was controlled by neighboring regions.

In 1917, the Belorussian SSR came into being, and in 1922, it became a founding republic within the Soviet Union. During World War II, Belarus lost a lot of territory to Poland, and it also had a grave impact on its economic resources at the same time. The Belarusian Republic started taking shape post-WWII and, in 1945, became a founding member of the United Nations.

When the Soviet Union disbanded, Belarus became an independent nation in August 1991. However, initially after gaining independence, Belarus faced a lot of economic hardships. Fortunately, with time, the poverty in Belarus has only decreased. The country has signed a treaty with Russia for more cooperation.

Here at Kidadl, we have carefully created lots of interesting family-friendly facts for everyone to enjoy! If you liked our suggestions for facts about Belarus then why not take a look at facts about Dublin, or facts about Guyana.