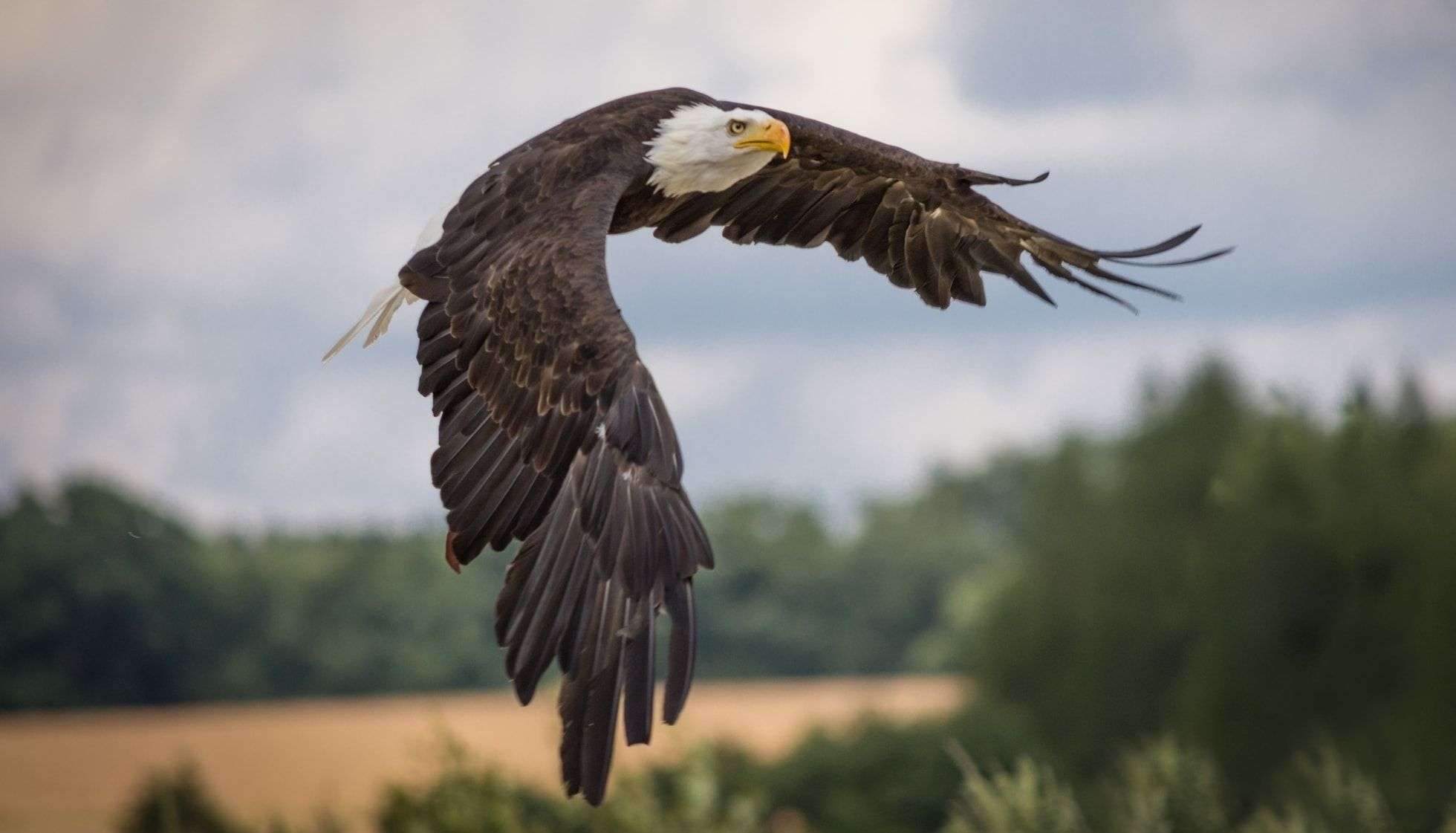 Bald eagles (Haliaeetus leucocephalus) are a bold birds species belonging to the Accipitridae family of the Animalia kingdom. Sea eagles are North American birds usually found in North America and South America. Bald eagles are migratory birds from the class Aves and usually migrate in winter. They typically prefer living near water areas. The bald eagle food diet includes raccoons, small birds, and carrion. They are brown, white, and yellow. On 9 June, 2017, recovery has been recorded in the status.

If you liked reading this, please do also try our martial eagle facts and crowned eagle facts facts.

What type of animal is a bald eagle?

The bald eagle, from the family Accipitridae.

What class of animal does a bald eagle belong to?

The bald eagle belongs to the Aves class.

How many bald eagles are there in the world?

Where does a bald eagle live?

The eagle (bald) bird is one of the most active North American birds. They usually live in marshes, lakes, rivers, and reservoirs. Bald eagles are also spotted in areas near fish processing plants and dumps. This eagle species lives in places with easy availability of food and safety from predators (against whom they use their sharp talons to defend themselves).

What is a bald eagle habitat?

The bald eagle (Haliaeetus leucocephalus) habitat is found in North America and South America. Alaska is the state with the largest population of bald eagles. Bald eagles live near water-bound areas such as rivers, lakes, oceans, where they can get food easily. Adult bald eagles are solitary and eat small birds, fish, and rabbits. They construct nests well before breeding. Their nest site is usually found on tall treetops for nesting. The breeding pair is responsible for construction of the nest through nesting. Their most favored trees for nesting are slash pines in Florida. And no, these birds don't clean their nests. Instead, they cover the nest up with fresh leaves and twigs. Their nests are not cleaned ever.

Who does bald eagle live with?

Bald eagles are North American birds that live near water bodies, even in winter. The bald eagle (Haliaeetus leucocephalus) was earlier known to be only from North America and was found to live alone. This bald eagle species is a solitary bird that is monogamous and pairs during the breeding season. The bald eagle is a migratory bird and spends its winters and migrates alone. Sometimes they are spotted taking flight in groups searching for food or hunting, but they are known to learn hunting from their parents by observing.

How long does a bald eagle live?

They are monogamous; they mate with the same partner forever. They reproduce sexually like any other raptor and become mature by the age of four or five. Their breeding season differs from region to region but usually occurs in winter, specifically November and December in southern areas. It is observed that they mate with the same partner until one of the partners dies. Copulation usually takes place on a branch or in the nest, where the female bird touches the male's cloaca, and sperm is transferred from male to female. The female bird then lays eggs in January and February, after which the female bald eagle nests and protects her offspring. Incubation generally takes 35 days, and the average litter size of this bald eagle species is one to three eggs per mating season. Eggs come out white.

According to the IUCN and Cornell Lab of Ornithology, the bald eagle (Haliaeetus leucocephalus) conservation status is listed as Least Concern. In the year 2019, they were categorized as an endangered species. Data and reports as of 2020 show an increased population, and they are not an endangered species anymore. What has saved the bald eagle population is the American public's conservation efforts along with the banning of DDT as well as habitat protection stemming from the Endangered Species Act.

Bald eagles are one of the most attractive and bold bird species. This species is found in the U.S, mostly in northern areas, and are considered one of the largest raptors in North America. Adult bald eagles have a dark brownish body with black-brown wings and a white head. Bald eagles are so-called as they have white heads which look bald to many from afar. Both male and female bald eagles have white-heads and live up to 20 years. Only the top of their legs have feathers, with legs and bills otherwise being yellow, increasing the aesthetic beauty of these birds. Their color combination is bold and stands out.

Bald eagles prefer building a nest on tall treetops and then proceeds to lay eggs in a nest on top of these trees. Young bald eagles are light brown in comparison with adults. They have tiny feet and not fully prepared feathers, so they may take around four to five years to be mature enough to take care of themselves and their territories.

Bald eagles, the national bird of the U.S, are cute and pleasing birds. Alaska has the most extensive counting of bald eagles. There are chances that bald eagles may walk in a very unique and awkward way with the help of a rocking gait.

Bald eagles are high-pitched birds that chatter, whistle, and chirp. They vocalize with unique displays as well as from their nest, which is usually constructed on top of tall trees. They are solitary birds but sometimes fly in pairs or groups. Bald eagles generally live near water areas. They rarely communicate while hunting mammals, and protecting their territories.

How big is a bald eagle?

How fast can a bald eagle fly?

How much does a bald eagle weigh?

Eagle is the common name for both the female and male members of this species. It is a brown and white migratory bird. Females have comparatively deeper beaks.

What would you call a baby bald eagle?

Young ones of the bald eagle are known as fledglings. After feeding through their formative years, bald eaglets finally reach maturity at the age of four years. The babies have dark-colored heads that helps them camouflage. As they grow, they get white plumage on their head.

The bald eagle diet consists of fish, especially salmon, rabbits, squirrels, and carrion. They can be considered scavengers too. They usually live near water-bound areas and make their nests on tall trees away from predators. From these heights, a bald eagle spots fish and then swoops down and grabs them with its talons before swooping back up.

Bald eagles are dangerous to humans and small mammals. They sometimes attack humans (being almost half the height of a human) using their razor-sharp talons and beaks and also catch fish and other prey with the help of the same. Talons (claws) of birds of prey, like in the bald eagle, are usually very strong and help them in catching and feeding on various creatures. Bald eagles are indeed considered dangerous; you must be safely away from them. They become more aggressive during mating season while protecting their territory.

It is not known to be a good pet. Moreover, it is illegal in the United States to keep them as pets because they may be dangerous to humans and other pets; they are not friendly. They are incredibly smart and they have even been known to hunt small animals including cats and smaller dogs. These birds had previously fallen under the category of Threatened and then Endangered, but since the population status of bald eagles has been increasing, their conservation status has now been listed as Least Concern. This still doesn't change the fact that these eagles aren't safe to keep as pets and may create problems if they start living near humans.

The irony is that the bald eagle is not bald.  It is special and important because it is the national bird and emblem of the U.S. Bald comes from the old English word 'balde' meaning white.

Common loons could kill a bald eagle and are a predator of this national symbol.

Shooting or killing the once threatened and endangered bald eagle accidentally could result in a $5,000 fine and prison time.

This former threatened and endangered species is a symbol of beauty and grace in North America. They are called birds of prey and indeed do hunt small animals, although not particularly pets. The bald eagle's diet as a wild bird includes fish, mammals, and other reptiles. They use their razor-sharp talons to catch their prey.

How do eagles keep their nests clean?

They are not known to keep their nest clean and instead use a lot of plant material, including twigs and leaves to cover the messy surface of the nest. Over time, their nests get dirty and even maggot-infested, but these birds continue to cover this up for good.

Here at Kidadl, we have carefully created lots of interesting family-friendly animal facts for everyone to discover! For more relatable content, check out these hoary bat facts and Great green macaw facts pages.

You can even occupy yourself at home by coloring in one of our free printable bald eagle coloring pages.