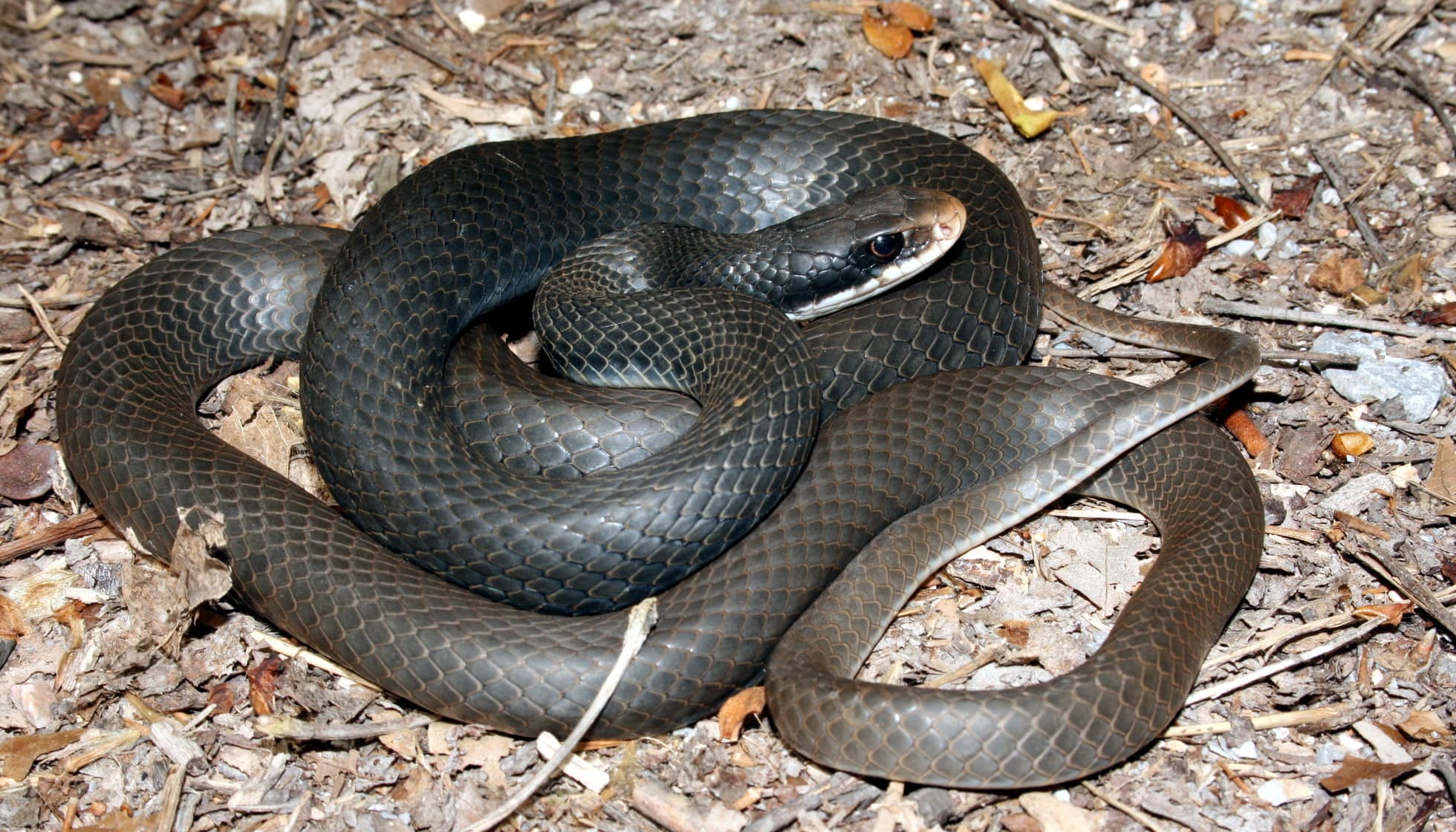 Black racer snakes are reported to be non-venomous predators that belong to Coluber constrictor species. There is a variety of colors of this snake species with black being the predominant color and others being reddish-brown, gray, yellow, and sometimes even white. The length of a black racer snake is typically 20-60 inches and they weigh around 1.25 lb (560 g).  They come in many different subspecies. The southern racers are the most common of all subspecies. Their lifespan is assumed to be 10 years. Racers are mostly found in the southern United States in places like Maine, Florida, and the like. They are also found in Canada and Mexico. Their preferred habitat is wooded areas and thickets where they can finely stay camouflaged under the long green grass and also climb trees as well for prey with ease. While their main habitat is mostly in the ground surrounded by grass or in the woods, it is also true that they are great at climbing trees. They can be found in forests as well. When they climb trees, it is fine to assume that they are aiming for bird nests for eggs, chicks, and sometimes adult birds as well, such as finches, canaries, and more. For the long black racers, their habitat in the woods is their life. Preying, hiding, climbing are the parts of their everyday life. The racers are not very sociable and seem to adjust to this life in solitude.

These snakes are known to be integral to the ecosystem because they prey on rodents and also keep the population of harmful insects such as spiders and lizards under control. Even though the racers are deemed non-venomous, their bite can be quite unpleasant.

If you like to read up on animal facts you could also check out hognose snakes and rat snakes.

What type of animal is a Black Racer?

As their name implies, black racers are the species of snakes with distinctive smooth and colored scales and large eyes.

What class of animal does a Black Racer Snake belong to?

Black racers belong to the class of reptiles, just like all other snake species.

How many Black Racer Snakes are there in the world?

Since the conservation status of the black racer snake as per the IUCH Red List is listed as of the Least Concern because of the abundance in the population of this species of snakes especially the black racer Coluber constrictor, which is the most common black racer snake. An accurate number of black racers around the world is uncertain because it isn't possible to practically monitor their numbers.

Where does a Black Racer Snake live?

Black racer snakes prefer to live in wooded areas, forests, fields, and wetlands hidden under the green grass. Racers are found inhabiting the Northern and Southern United States in places like Florida, Southern Maine, and even in parts of Mexico and Canada.

What is a Black Racer Snake's habitat?

Black racers love wooded areas where they can stay hidden under tall green grass and vegetation as well as climb trees to prey on eggs and chicks in bird nests. Racers are found usually near water, also in trash piles, and across the roadside in urban areas like Florida. In Florida, adult racers can be found commonly in the neighborhood.

Who do Black Racer Snakes live with?

Their social structure is usually solitary. That means they prefer to live on their own.

How long does a Black Racer Snake live?

The lifespans of black racer snakes are assumed to be close to 10 years. Sometimes they are mistaken with other black venomous snakes and are killed. However, it is fine to say they live about 10 years.

Black racers mate during their particular mating season. The females lay about 20 eggs during reproduction. In the late summer or autumn, the snakes come out of the shells of the eggs laid by the females. The baby snakes are usually tan, black, or even white in color.

The conversation status of the black racer snake is of Least Concern (IUCN).

The black racer snake possesses a smooth and long slender body which is covered all throughout in dark gray or solid black scales. They have distinctive large eyes are known to grow to a length between 20in-60in (51cm160cm) long. It is therefore considered to be a large snake because of its size. They also come in several other colors like yellow, white, or reddish-brown.

Snakes usually do not have a very high cute quotient because they are commonly rendered as creepy and evoke the feeling of fear. They cannot be labeled as cute, but are exceedingly fascinating to snake lovers and other animal lovers because of their color variants.

Black racer snakes usually communicate with each other via vision and olfaction or their sense of smell, because snakes are known to be excellent at picking up scents from miles away.

How big is a Black Racer Snake?

They are 20in-60in in length and ten times bigger when compared to the length of a lizard.

How fast can a Black Racer Snake move?

The maximum speed they can reach is about 4mph.

How much does a Black Racer Snake weigh?

The black race snakes usually have an approximate weight of about 1.25 lb.

The black racers are not named differently as per their gender. Male racers can be distinguished from the females of the species by the tail, which is longer with a wider base, sometimes even a bulge. The female's tail tapers abruptly from the body.

What would you call a baby Black Racer Snake?

Baby black racer snakes are called little black runners which is quite a relevant and adorable name if compared with their adult counterparts.

The black racers are not poisonous at all, but their bite can be quite unpleasant and painful.

Even though they are nonvenomous, It is still not a good idea to keep them as pets. They are not a docile species of reptiles unlike other snakes who are commonly kept as pets and their wild nature prevents them from being accustomed to being handled.

When threatened black racers are quite fast-paced and are known to crawl up to 4mph in speed. They are also known to be diurnal, meaning that they sleep throughout the night and are exceedingly active throughout the day hunting and feeding.

This species of snakes usually have solid black, gray, brown, or sometimes white skin color with smooth scales covering their bodies. One of the more common subspecies of black racers is the southern black racer snake. The southern racer species are also known as racer Coluber constrictor priapus. The Coluber constrictor priapus is distinctively known to have a white chin. The black racers typically grow up to a length of 51–142 cm (20–56 in). The racers usually prey on lizards, insects, moles, birds, eggs, and small snakes. The southern black racer can be mistaken for a cottonmouth, a venomous snake, and they are often killed by humans.

Racer snakes are beneficial to humans due to their fundamental nature of destroying rodents and insects like spiders and lizards. The racers are not harmful to humans but are capable of biting if they are being harassed or attacked.

Here at Kidadl, we have carefully created lots of interesting family-friendly animal facts for everyone to discover! Learn more about some other reptiles including rattlesnakes, or corn snakes.

You can even occupy yourself at home by drawing one of our black racer snake coloring pages.

Thank you to Kidadler Mrs. Warren for providing the image of a Black racer Snake in this article.