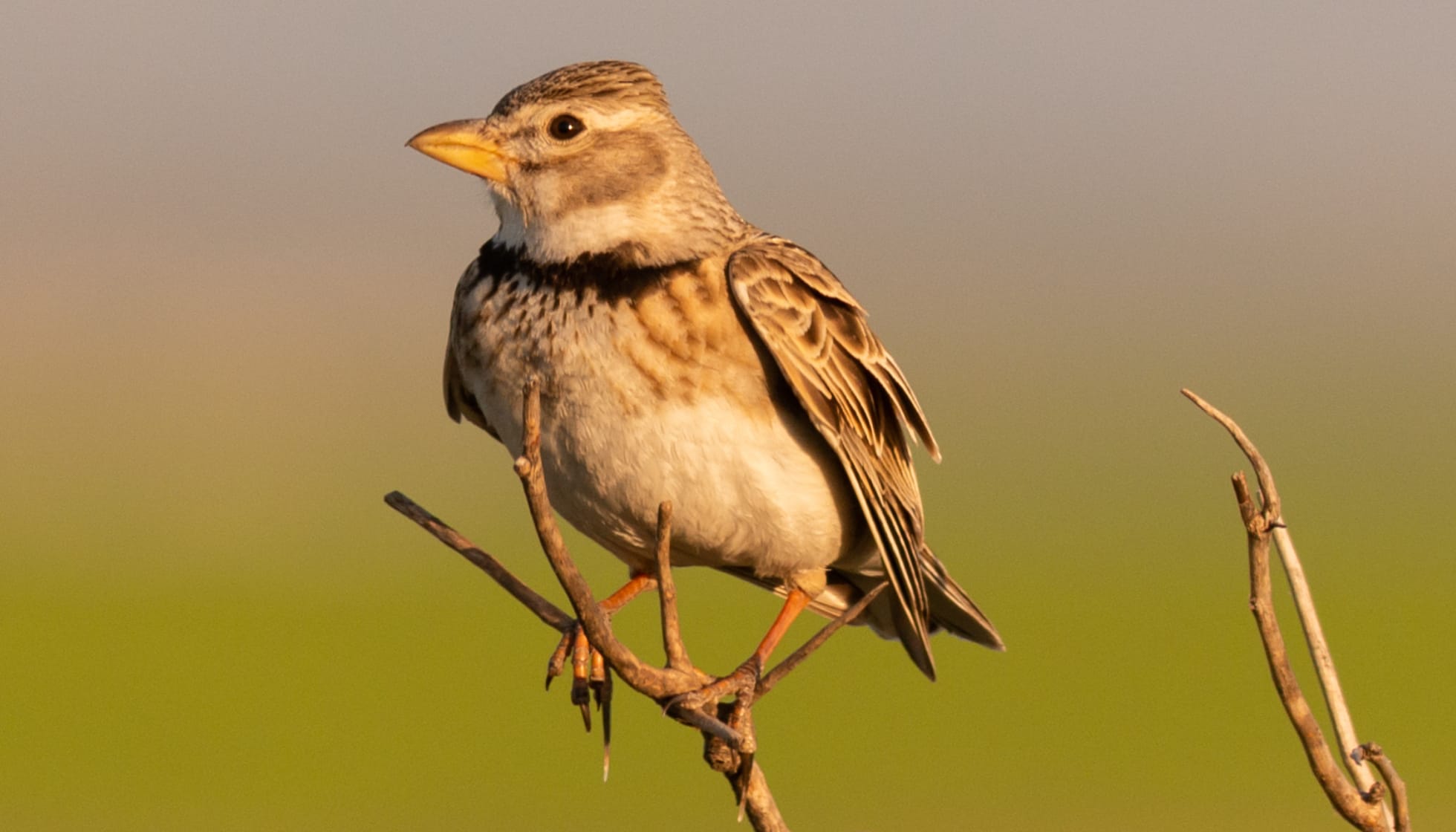 The calandra lark (Melanocorypha calandra) is a bird recognized as the bulkiest of all four subspecies. Temperate climates characterize their wide distribution. The calandra lark range is in Europe, Afghanistan, Spain, Iran, Turkey, Kazakhstan, Africa, and some European countries. This bird is a resident of North Africa and Europe. During the breeding season, some movement can be seen. This bird eats shoots, seeds during winter, and insects during summer, i.e. during the breeding season. Russian calandra larks are found to be more migratory. During breeding, they nest near vegetation, and it is made up of dry grasses, stems, or straw. This bird is placed under the Least Concern status. They have attractive features like their song and gorgeous wings. During the breeding season, some movement can be seen. It is renowned for its flight song. Birds of this species can mimic the songs of other species of birds.

If you enjoy reading about Calandra lark (Melanocorypha calandra), do check out interesting facts about the Western meadowlark and Eastern meadowlark.

What type of animal is a calandra lark?

The calandra lark (Melanocorypha calandra) is a type of bird from the Alaudidae of the larks. This bird is the bulkiest species of this order family. Their distribution is found in Europe, Kazakhstan, Turkey, and Africa as well.

What class of animal does a calandra lark belong to?

They belong to the bird species and are from the class Aves.

How many calandra larks are there in the world?

Where does calandra lark live?

The calandra lark (Melanocorypha calandra) is found in grasslands and pastures. Open fields and dry farmlands are preferred. They mostly inhabit fallows, long-fallows, and field edges, but can also be found on fields that have already been sown, selecting unirrigated legume and barley fields. Their migration is towards the south and that is also during the winter season.

What is a calandra lark's habitat?

Melanocorypha calandra lives in temperate European countries like Spain, France, the east of the Russian continent, and northwest Kazakhstan, and range from Mediterranean islands to northwest Africa, in some parts of Turkey, and in northwest Iran. This bird is a resident of S and E of Europe. The Russian population of these birds is more migratory during winters.

Who do calandra larks live with?

In winter and autumn, calandra larks form a large flock.

How long does a calandra lark live?

This bird has a lifespan of five years.

In this species, the female breeds solitary and the male breeds in loose colonies, but if the population is a big factor, they can nest together. Two broods are produced by this species each year. In the nest, a liner of grass is placed inside the interior, and the nest is made of dry grasses, grass stems, or straw. Late in April, the eggs are laid. Each female lays about four greenish eggs. Following incubation, they develop numerous dark brown or gray markings and become whitish. Incubation takes place in the female alone over a period of 12-14 days. After receiving both parent's feed the calandra lark nestling and it then fledges at 11-12 days of age. Their first flight occurs about 20 days after hatching when their feathers are fully developed.

The calandra lark (Melanocorypha calandra) species are not extinct. Therefore, they are under Least Concern for IUCN conservation status.

Melanocorypha calandra is the most robust and plumpest species out of all four subspecies. It is about 0.1-0.2 lb (52-73 g) in length. Both sexes exhibit similar characteristics, but females have less noticeable black spots on their necks. The color of the eyes is brown. The grayish-brown upper parts of the adult male have dark streaks. It appears to be very dark when flying, almost black, regardless of the pale outlines of its back feathers. As well as the lower portions of the breasts and belly, the chin is white. A pale buffy brown streak covers the upper breast. During the flight, white spots can be seen on the feathers of primary and secondary feathers, contrasted against the dark plumage. There is an upper jaw that is darker, and the bill is conical and down-curved. A yellow color covers the lower jaw. They have a yellowish-brown color to their legs and feet. With the two outer rectrices mostly white, the short tail is mostly blackish-brown. A black spot is located near the bottom of the neck on the neck side. The juvenile's breasts are paler and have fewer marks of dark pigmentation than the adult's.

The calandra lark (Melanocorypha calandra) is definitely very cute because of its chubby size and mesmerizing song. It also has beautiful colored wings that look gorgeous during flight.

Melanocorypha calandra have a sharp tink in their chirp. When they flock together, these vocal signals are used to attract mates, deter enemies, and warn others in their group. In general, this bird species communicate by body postures and positions to communicate with other members of their order family. As soon as they become alarmed, they crouch briefly before taking off immediately. The calandra lark sings throughout the air as it rises by spinning in circles. When it reaches some height, it takes flight in circles over the territory for several minutes, then descends to around 262.5-328 ft (80-100 m), and then dives into the ground. It chases intruders as it flies in its territories.

How big is a calandra lark?

How fast can a calandra lark fly?

The Melanocorypha calandra flies at the speed of  22.1 mph (35.6 kph). They usually fly strongly and undulating, periodically closing their wings. They have a characteristic flight pattern. In-flight, the bird performs slow, and deep wing beats on stiff wings and a closed tail while at flight and low at some heights.

How much does a calandra lark weigh?

There is no specific name for male and female species. However, they are referred to as male or female calandra lark birds or sometimes by their scientific name as Melanocorypha calandra.

What would you call a baby calandra lark?

The baby calandra lark (Melanocorypha calandra) is called a chick.

The calandra lark (Melanocorypha calandra) eats seeds and shoots during the winter season. When breeding occurs, which is during the summer, grasshoppers, worms, small mollusks, caterpillars, and rhinoceros beetles are the insects that they feed on.

This species of bird is very friendly. They mostly live near the residents and locals of their habitat, while their distribution is widely in the Russian and European areas.

This species of bird is usually not kept as a pet.

This species has four subspecies, namely, Western calandra lark, Eastern calandra lark, M. c. Gaza, and Levant calandra lark. Also, gray and cinnamon colors are prevalent in these species, as well as darker breasts spots. They all are found in Iran, Turkey, and Africa. Their distribution is in a few Russian regions as well.

The calandra lark (Melanocorypha calandra) sounds similar to skylark but the version is slow. These birds have very loud, melodious songs that are sometimes punctuated with sharp tones that make them sound less strong and pleasant than expected. Their song is sometimes a mimicry of the songs of other species of birds. Their nasal chatter can be heard in the fields of corn or barley following harvest. As early as March, the males start singing loudly. The calandra lark's singing is a high-pitched trill and is part of the song flight.

How did the calandra lark get its name?

Alauda was the original name for calandra lark. Melanocorypha uses melas, 'black,' and koruphos, words used by ancient authors for an unknown bird, but here used with korudia, 'lark.' Calandra is derived from the Ancient Greek kalandros. The species bimaculated lark is also known as the calandra lark.

You can even occupy yourself at home by coloring in one of our free printable calandra lark coloring pages.