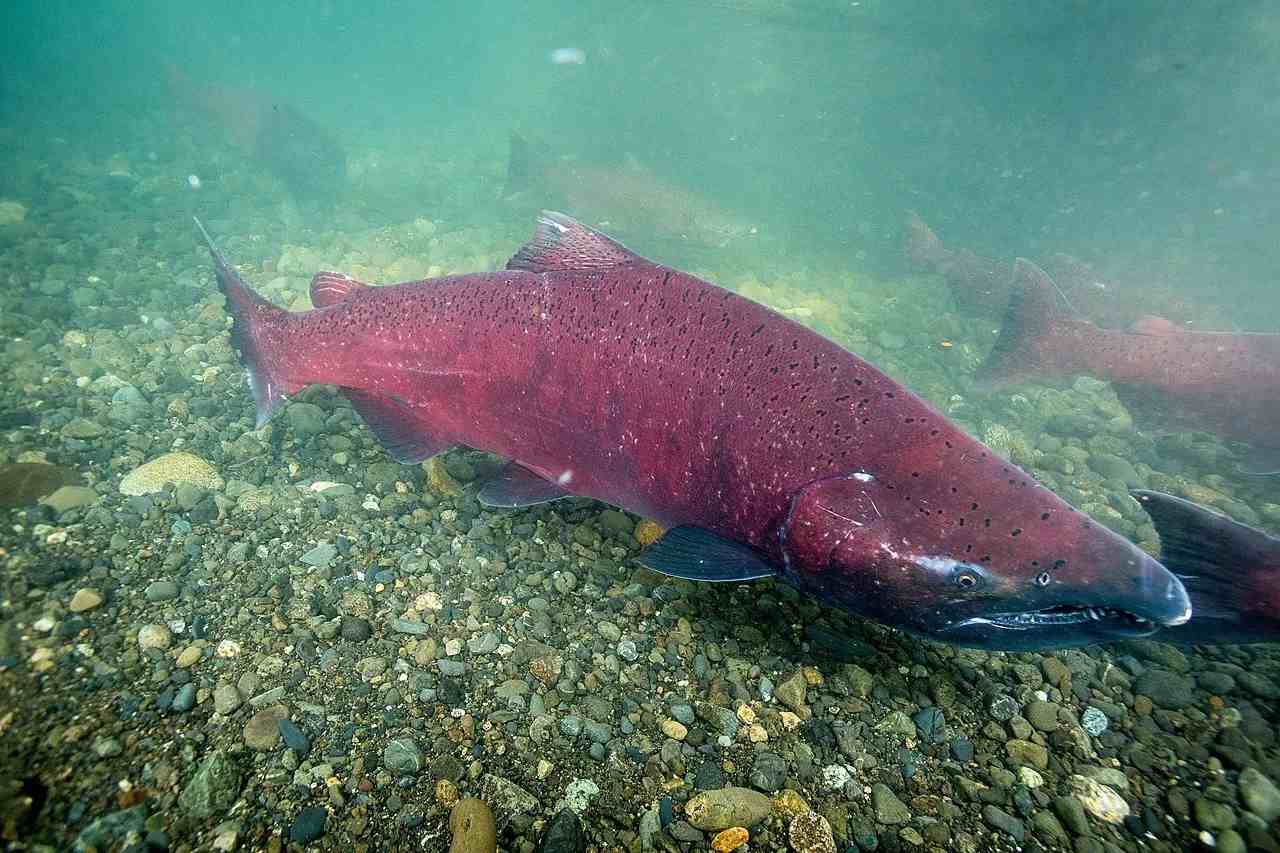 The chinook salmon are the largest of the Pacific salmon which makes them a very interesting fish to learn about. Apart from being a Pacific salmon residing mostly in the Pacific northwest region, this salmon species is also given the name spring salmon or spring chinook salmon. This is because they start to migrate towards freshwater during the spring as their spawning season begins in the summer. The life history of a chinook salmon spawn begins in fresh water bodies such as rivers until they return to the ocean or the sea. However, salmon populations are considered to be Threatened under the Endangered Species Act. Not just Pacific salmon species, but species all around the world have fallen prey to climate change. Climate change has resulted in depleting resources in oceans, rivers, streams, and other water bodies. This affects the populations of chinook salmon because chinook salmon are anadromous, meaning that they live in fresh water as well as oceans, seas, and other marine water bodies. Their populations must be saved to prevent them from going extinct.

What type of animal is a chinook salmon?

The chinook salmon (Oncorhynchus tshawytscha) is a type of fish.

What class of animal does a chinook salmon belong to?

The chinook salmon belongs to the class of Actinopterygii, which is the class that all fish belong to.

How many chinook salmon are there in the world?

Where does a chinook salmon live?

The chinook salmon lives in a range of water bodies with fresh water (like rivers, streams, and springs) as well as the ocean or sea. Their range can be found in water bodies of the Pacific region, including the northwest and north Pacific. This includes places like California, the Chukchi Sea, Columbia River, and Monterey Bay. This species of fish can also be found in North American states like Alaska. This species can also be seen in the Asian range such as in the waters of Hokkaido in Japan. In Russia, chinook salmon can be found in Siberia's Anadyr River. Apart from these places that are native to the chinook salmon, this fish has also been introduced by humankind in places such as New Zealand and the Great Lakes.

What is a chinook salmon's habitat?

The habitat of the chinook salmon species is very interesting. This fish is born in bodies of freshwater like streams and rivers. Over the course of their life, they migrate to marine water bodies like the ocean from these streams. However, adult Chinook salmon again returns to fresh water during the spawning season as water bodies with freshwater serve as their spawning grounds. When it comes to a fresh water habitat, the ideal temperature for chinook salmon is 57 F (14 C). The stream type must also be swift-flowing and deep in nature. There are no such criteria for their ocean habitat or when they migrate.

Who do chinook salmon live with?

How long does a chinook salmon live?

The average lifespan of a wild chinook salmon is two to seven years.

It takes two to seven years for chinook salmon to attain sexual maturity. However, adult chinook salmon return to its freshwater habitat to spawn at the age of three to four years. Male and female salmon form a pair for the purpose of spawning. Generally, the summer and autumn seasons mark the time for the spawning season in the life history of these salmon. The season may also vary as per the stream type where the fish spawn. Other factors include the type of rivers which influence when and where they will spawn. Fertilization of the eggs occurs externally, meaning that the female lays eggs in the water of the streams. For this, she digs up a hole which is known as a redd. The male then fertilizes the 3000 to 14,000 eggs laid in this redd.

After the process of fertilization, both parents guard the eggs to ensure that they are protected from possible harm. The entire process through which chinook salmon spawn is quite exhausting. This includes the act when the juvenile eggs are protected as well. As an aftermath of the colossal amount of energy lost during this spawn time, both adult parent salmons (males and females) lose their life before the eggs even hatch to life into juvenile salmon and move to the ocean or the sea.

The conservation status of spring salmon is Not Evaluated according to the International Union for Conservation of Nature. However in the United States, there are 17 different categories of chinook salmon which are termed as ESU or Evolutionarily Significant Units. Out of these two categories, a couple of species are listed as Endangered by the Endangered Species Act. On the other hand, seven are listed as Threatened. Only one is listed as Candidate, while the remaining eight remain listed as Not Warranted. The Federal List of the States has listed this fish as an endangered species. In order to rectify this, strict rules and regulations are being imposed on the regulations over fisheries management.

This salmon species are the largest of the Pacific salmon. In the ocean, chinook salmon flaunt a silver body with white bellies. However, their heads are a greenish-blue color. Their backs are dotted with a black color. These spots are also seen on the tail fin of this fish. The black coloration through their gums gives them the name, blackmouth.

The spring salmon is not at all cute. Moreover, this fish looks quite unappealing. They lack eyelids which makes their eyes appear big and bulgy. Additionally, their black mouths do not help them in the look factor either.

Communication in chinook salmon takes place mainly through the sense of touch throughout their life history. This is usually felt in the form of vibrations. Also, communication may be established through chemical signals. One example of communication between these fish may be cited from their breeding habits. During the courting period, a male swims in front of a female while emitting vibrations. Vibrations occur in accordance with the mass of the fish. Larger males are known to emit stronger vibrations. This factors in when a female chooses a male. On the other hand, in order to begin the fertilization process, a female shakes rapidly in front of the male while laying her eggs.

How big is a chinook salmon?

How fast can a chinook salmon swim?

How much does a chinook salmon weigh?

What would you call a baby chinook salmon?

A baby or juvenile chinook salmon is called a fry.

Chinook salmon are carnivorous in nature. Being born in fresh water, young juvenile salmon feed on insects, shrimps, prawns, amphipods, as well as different types of planktons. But once they grow up, adult chinook salmon move to estuaries and oceans. In the ocean, they feed on bigger zooplanktons. However, their primary source of food is obtained from other fish including pilchards, sand lances, and herrings. Adults also feed on crustaceans just like young salmon. Chinook salmon feed on squids too.

Though chinook salmon is considered harmless for human consumption, they contain a certain amount of toxic chemicals which pose a threat to their predators.

Although chinook salmon can be kept as a pet, it is debatable whether it would be a good choice. This is because this salmon requires exceptional care. They need to be born in fresh water and then be shifted to the ocean or saltwater in the case of an aquarium. They are also carnivores which makes this salmon fish difficult to care for and so they should have a life in the wild.

The chinook salmon is known to be the tastiest of salmons since it has the highest fat content. It has numerous nutritional benefits.

The biggest chinook salmon that has been caught to date hails from the commercial catch. It was caught in British Columbia in river inlets in the latter half of the '70s, and weighed 126 lb (57 kg).

The chinook salmon is the largest salmon out of all the other species.

What is the difference between king salmon and chinook salmon?

How high can a chinook salmon jump?

Although the exact height of the jump of a chinook salmon is not known, salmons have a reputation for being able to jump as high as 6.5 ft (2 m).

Here at Kidadl, we have carefully created lots of interesting family-friendly animal facts for everyone to discover! Learn more about some other fishes including angelfish, or white cloud mountain minnow.

You can even occupy yourself at home by drawing one on our chinook salmon coloring pages.