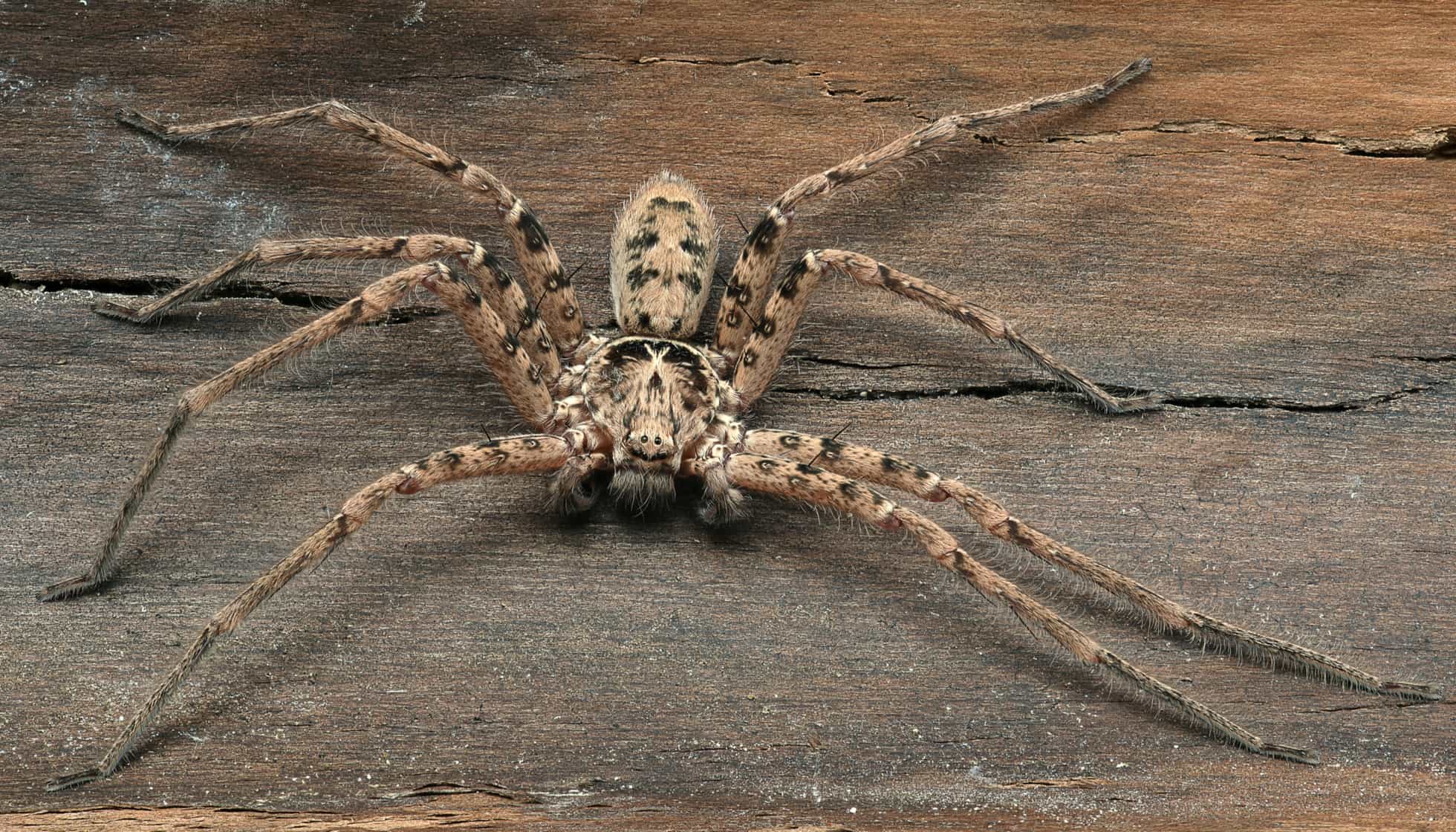 The giant huntsman spider (Heteropoda maxima) of the family Sparassidae is a member of the huntsman spider group. These spiders are efficient and swift predators. They are brown or yellow. Other names of these species are rain spiders, wood spiders, giant crab spiders, and lizard-eating spiders. They hunt and forage for their food. They are the world's largest spider by leg span and can grow up to 12 in (30 cm) across. They were first discovered in a cave in Laps and first described by P. Jäger in 2007. Between 1997 and 2007, there were thousands of these spider species in the Greater Mekong subregion. These large species went undiscovered for so long. The World Wide Fund for Nature's representative stated that 'some of these species really have no business being recently discovered.' There is a wide range of sizes and shapes of these spiders. The giant Australian huntsman spider is the biggest spider by diameter.

You may also enjoy reading about the tarantula and the orb-weaver spider.

What type of animal is a Giant Huntsman Spider?

This species of huntsman spider (Heteropoda maxima) is of the Heteropoda genus and Araneae order. These spiders are active during the night. Like any other spider, these species also have two segments in their body, abdomen, and cephalothorax. These spiders are swift and active hunters. They do not catch prey using their webs, they stalk and chase their prey. They can also jump and run faster than an average human being. As well as this, they show cannibalistic tendencies.

What class of animal does a Giant Huntsman Spider belong to?

This species of huntsman spider (Heteropoda maxima) is of the Arachnida class of animals.

How many Giant Huntsman Spiders are there in the world?

The exact number of these spider species is not available.

Where does a Giant Huntsman Spider live?

The range of the giant huntsman spider location includes Laos and Australia.

What is a Giant Huntsman Spider's habitat?

These huntsman spiders are found in caves, cave entrances, and woody areas. Due to their long legs and pale color, they dwell in caves out of sight of predators. They are found hiding in crevices on rock walls, under loose bark on trees, under rocks, and slabs bark on the ground.

Who do Giant Huntsman Spiders live with?

These huntsman spiders live in groups of 100 or more. There is not much information about the social structures of these spiders.

How long does a Giant Huntsman Spider live?

The average lifespan of these huntsman spiders is 10 months. They can live up to two years of age in certain circumstances and conditions.

The male and the female have a long mating ritual, and after mating, they remain together for some time. The male senses the female's pheromones and produces vibrations on the ground. This vibration acts as a message and lets a female know about the presence of a male. The vibration sounds like a periodic ticking of a clock. After the female picks up this vibration and finds the male, she will present herself for copulation. The female then lays around 200 eggs. She creates an egg sac by wrapping the eggs in a silk cocoon to protect them. During the incubation period, she will stay with the egg sac without eating. This period lasts up to three weeks and can change depending on the surrounding conditions. The females protect the egg sac aggressively and even attack to guard the eggs. It has also been observed that females tend to move the egg sac to confuse predators.

The conservation status of these huntsman species of the Sparassidae family is not available.

These huntsman spiders of the Sparassidae family have a yellowish-brown body. They have irregular dark spots on their rear half. The legs of these spiders twist forward in a crab-like fashion. Their legs are longer than their body, and they have dark bands. These huntsmen spiders can be differentiated from other species of this genus by their genitals. The cymblum is three times longer than the tegulum on males. The epigyneal field has a distinct shape with two anterior-directed bands seen in females.

With those long stick-like legs and hairy bodies, these huntsman spiders scare a lot of people and so cannot really be called cute.

They communicate through vibration, which is their mating call. The females respond to this call produced by males. It is also audible to human ears and sounds like the periodic ticking of a clock.

How big is a Giant Huntsman Spider?

The giant huntsman spider size has a 12 in (30 cm) leg span and a 1.8 in (4.6 cm) body span. They are the largest huntsman spiders by their leg span. Before the discovery of these spiders, the Australian Beregama aurea was the largest in the Sparassidae family. The goliath birdeater is the biggest spider, though these huntsmen spiders are bigger when including their long legs.

These huntsman spiders are very fast. The data on their exact speed is not available though.

How much does a Giant Huntsman Spider weigh?

There are no specific names given to male and female huntsman spiders.

What would you call a baby Giant Huntsman Spider?

There is no specific name given to a baby giant huntsman spider. They are usually referred to as juveniles or spiderlings.

These huntsmen spider species feed on anything that comes their way. They do not use their web to catch prey rather they stalk and chase the prey. These huntsman spiders feed on lizards, cockroaches, insects, crickets, and sometimes rodents and birds. Near human settlements, they feed on pests. As they are cannibals, it is observed that they feed on dead ones of their own kind. The females feed on the males after mating.

These huntsman spiders are not poisonous. They use their venom to destabilize their prey. This venom does not affect humans.

They would not make a good pet due to their size. People mostly pet mini huntsman spiders.

It was once reported that a giant huntsman spider ate an entire pygmy possum.

The juveniles are born with a pale color and eventually get darker as they grow. These spiders grow through molting. If you find old skins hanging from surfaces in your home, then you have got yourself a pet huntsman.

The speed of these huntsman spiders is around half the speed of Usain Bolt!

Do Giant Huntsman Spiders jump at you?

These spiders have legs away from their body that look like crab's legs. They do jump sometimes or fall from a surface to escape threats. They can cover up to 30-40 times their body length in a second. These spiders only jump when they are trying to escape danger. They are known to bite humans but their bite is not fatal. Their bite is painful though and might have other side effects. The victims may sometimes experience headaches or mild nausea. If bitten by these spiders, it is suggested that you visit the hospital.

The biggest spider to set a world record is the goliath bird-eating spider for its weight. They weigh around 0.37 lb (0.17 kg). However, the giant huntsman spider has the largest leg span of about 12 in (30 cm), even larger than the goliath bird-eaters species which is about 11 in (28 cm).

Here at Kidadl, we have carefully created lots of interesting family-friendly animal facts for everyone to discover! Learn more about some other arthropods including the whip spider and the southern house spider.

You can even occupy yourself at home by drawing one of our giant huntsman spider coloring pages.