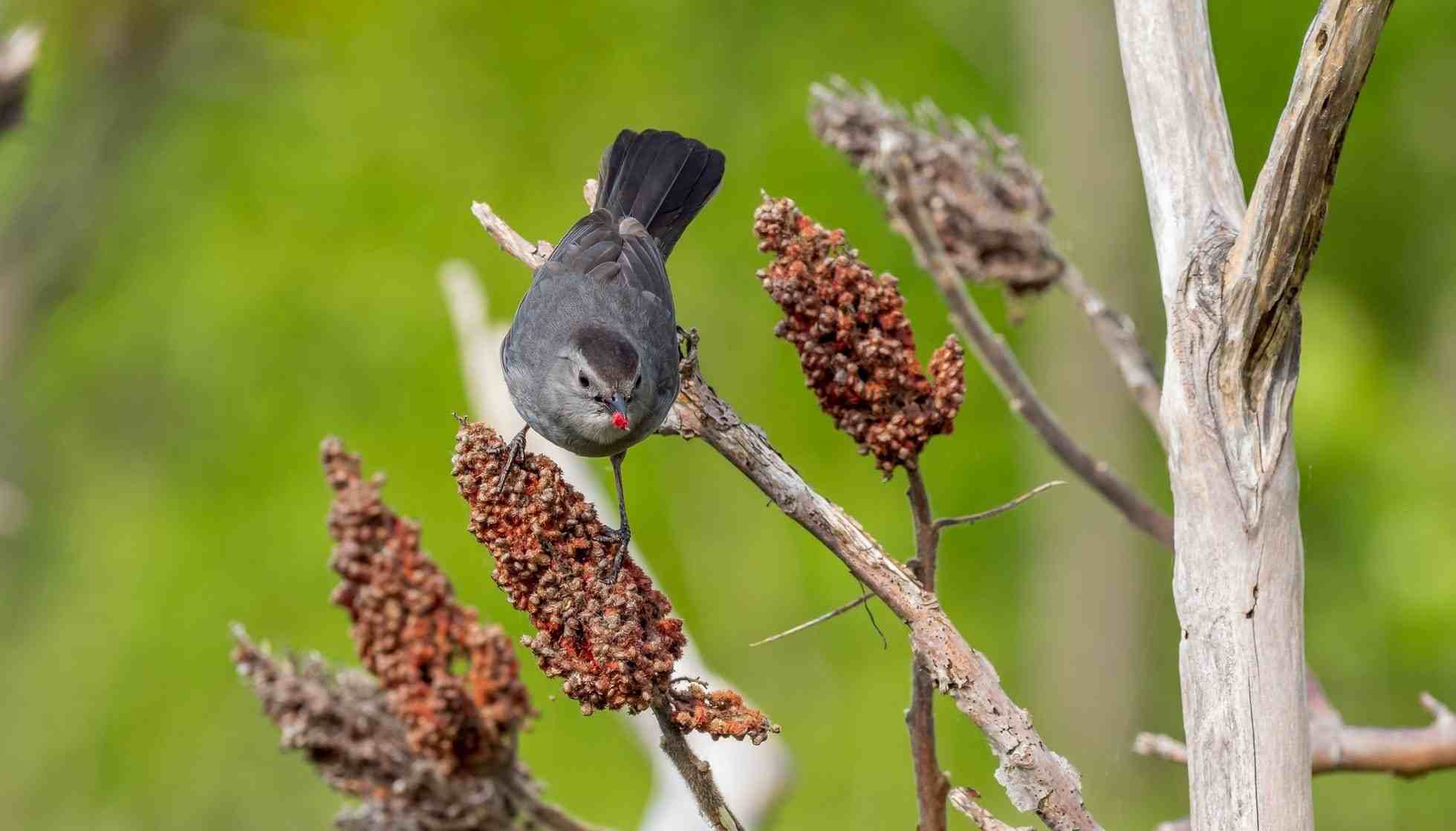 The gray catbird is also known as the grey catbird. This bird is a medium-sized North American and Central American type of perching bird that belongs to the famous mimid family of birds. This family is related to other birds such as the Caribbean thrasher, trembler, and mocking bird. Interestingly, in some places in the world, this bird is not known as a gray catbird, but it is called a ‘slate-colored mocking bird.’ Only someone who is knowledgeable and understands the study of the identification of birds can identify the difference between male and female gray catbirds. The gray catbird is extremely fearless with its predators as well and attacks ferociously if it is bothered or attacked. The gray catbird, in general, are known to be very common birds. Some unique species of these gray catbirds are extremely rare; these rare gray catbirds are mostly situated around the area’s and provinces around western Europe. One of the reasons they are called gray ‘catbirds’ is because their species communicate with each other in a very different way, the sound that they make to talk to each other is in a way ‘cat call’ like and that is why they are famously named ‘catbirds.’

They have grey skin all over; towards the head, they have a brown-headed and black cap for protection

Brushy Habitats And The Rocky Mountains

Mexico, The Caribbean, American Cordillera And Parts Of Western Europe, Central Part Of America, Southeast Of The United States Of America

What type of animal is a Gray Catbird?

The gray catbirds are birds, part of the Ave family.

What class of animal does a Gray Catbird belong to?

The class of animal that gray catbirds belongs to is the bird family, in the Animalia kingdom.

How many Gray Catbirds are there in the world?

Where does a Gray Catbird live?

Gray catbirds live in dense thickets, in the presence of many trees, in tropical rainforests where the trees are green.

What is a Gray Catbird's habitat?

Gray catbirds usually aim to avoid dense woodlands with thick tree covers. In order to make a nest and uphold their food and diet, they choose a place with thorny vegetation. The population of gray catbirds is usually higher in places such as the Caribbean islands, as there are scrub and myrtle swamps. Especially during the winter season, the gray catbird habitat is usually near a water source as they need to feed their gray catbird babies and therefore usually choose water and food that is present near the nest.

Who do Gray Catbirds live with?

How long does a Gray Catbird live?

There is a 60 percent annual survival rate for catbirds. There is an interesting record for the catbird's longest recorded life expectancy, which is around 17 years and 11 months.

Female catbirds learn to build their nests in extremely dense shrubs using a layer of twigs and grass. They learn to weave bits of plastic into their nests as well; as soon as the nest is finished, the female bird lays eggs, the female usually lays between one to six eggs, these eggs are very beautiful, they have turquoise green color eggs.

The conservation status of gray catbirds, unfortunately is under the least concern; neither the government nor the establishments are focused on conserving these birds.

This is a picture of the majestic gray catbird that is perched on a branch. It is grey in color, with a short break and a greyish-black cap upon it's head with a short yet pointed tail.

Gray catbirds are extremely cute, especially with the way they move their wings and handle and make their gray catbird nest; they are not only cute but very intelligent.

How big is a Gray Catbird?

The gray catbird is between 20-25 cm big in length and only 35 g heavy in mass; these are as big as mockingbirds. The male and the female gray catbird are around the same with respect to how big they are.

How fast can a Gray Catbird fly?

The speed of a gray catbird is not mentioned vividly. However, it's speed would be somewhat related to that of a mockingbird.

How much does a Gray Catbird weigh?

The weight of a gray catbird is around 35 g; they are quite light.

It is extremely hard to differentiate between the male and female species of a gray catbird; however, gender-wise there are no gender-based species.

What would you call a baby Gray Catbird?

Yes, they would make good pets owing to their trusting nature; if you feed them and care for them diligently, they will always be around you; they are extremely shy at first but a very friendly species. It is safe not to frolic around near the nest or irritate them during breeding, especially with females.

Unlike the rest of the song birds that exist in the world, the gray catbird is quit picky about its song and where to sing it therefore, it refuses to sing in open spaces and usually sings in dense thickets.

The gray catbirds' calls differ depending upon the sex of the bird. The male catbird is known to sing a long series of short notes, and if combines, it makes a song. This song or call, it can last for many minutes. These sounds are usually in the form of gurgles, whistles, squeaks, nasal sounds and also whines. The gray catbird is also known to imitate other birds and mammals as well, one of them being the frogs and the mechanical sounds they make. The series of sounds these birds make might seem random, but they often repeat these sounds, certain notes are always repeated. The mockingbird is also from this family, they are quite similar to the gray catbird. However, when they imitate sounds and mimic voices, they repeat the sound many times however, compared to the female gray catbird, these birds don't repeat the sounds. The female catbird sings frequently but not that common; their songs are quiet and calm.

How did the Gray Catbird get its name?

This gray catbird got it's name famously from it's gray catbird call and also from it's family that it resides; the family that it resides from is from the mimidaie, which is also known to be the family of the mockingbird. This gray catbird is known for its gray catbird song and gray catbird sound, which is that of a cat-like call. There are also several groups of songbirds that are called catbirds, specifically because of their strange wailing calls. The interesting part is that these wailing calls resemble the sound and song of a cat's meow. There is another genus name; the name is Ailuroesdus, this name is Greek in nature, the meaning of this name means 'the cat singer' or 'someone who is cat voiced'. This species of catbirds are also known to mimic the songs of other birds, especially the North American halide, which are the frogs of the trees.

Here at Kidadl, we have carefully created lots of interesting family-friendly animal facts for everyone to discover! Learn more about some other birds including mockingbird, or peacock.

You can even occupy yourself at home by drawing one on our Gray Catbird coloring pages.