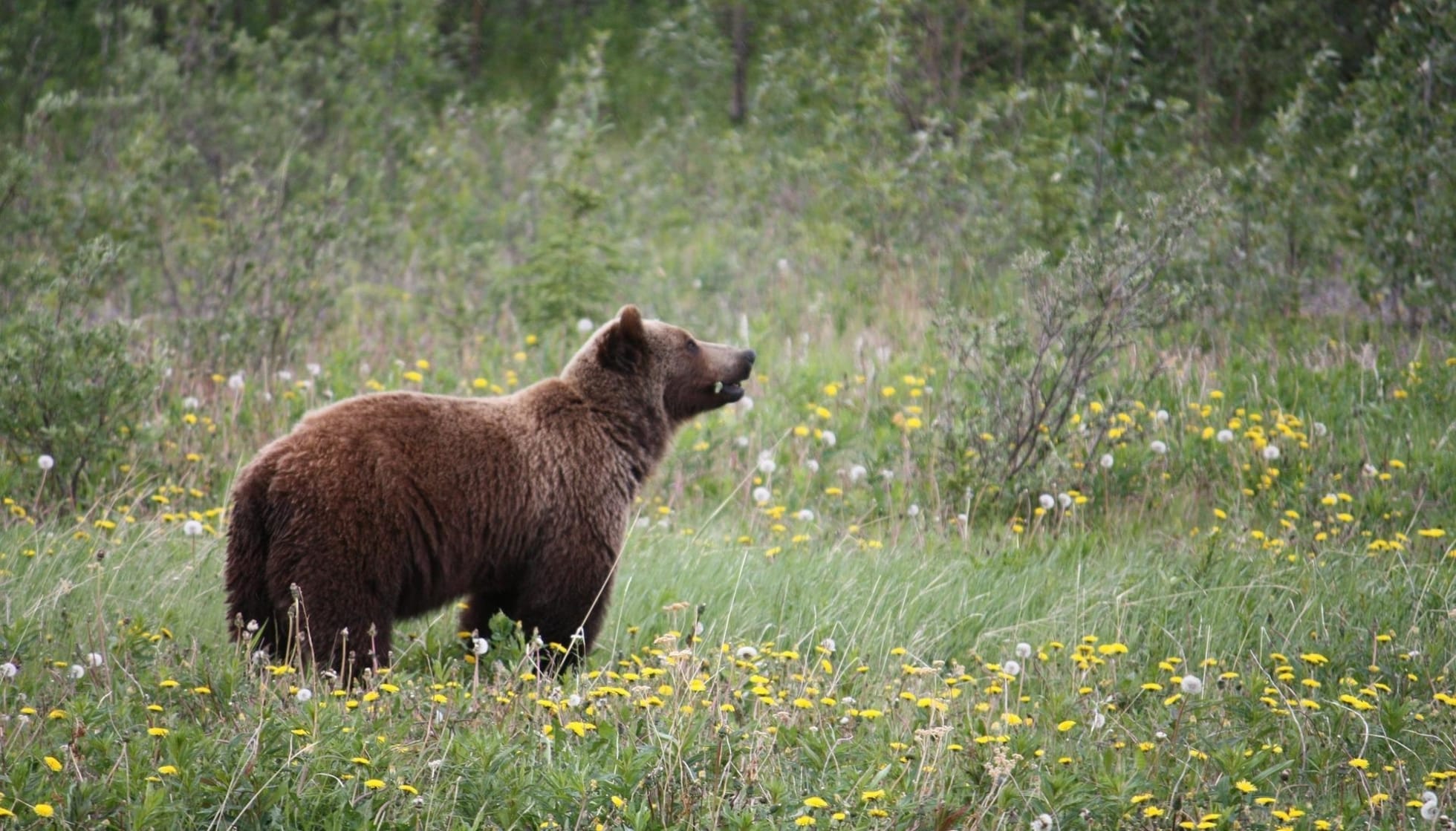 The famous animal that looks like a live walking teddy bear is called a grizzly bear! A grizzly bear is a brown-furred bear with a large body, a hump on its upper back, and four legs with long claws. Populations of this species are found in Alaska, Canada, North America, and Mexico, among which the largest population is found in Alaska.

These omnivore animals love to hunt and eat fish, especially salmon, as their food. Being omnivorous (not carnivorous), they also eat berries, plants, and nuts. They feed themselves well before undergoing hibernation during the winter. They wake up after five to eight months. Males and females get together for breeding in February during the late spring and early summer. The winter is for hibernating, and just before it is about to end, females give birth to two bear cubs. Sometimes they give birth to four cubs, but this is rare. The cubs are vulnerable when they're born and they are protected by the mother until they are two years old. Their only source of food initially is their mother's milk.

Grizzly bears used to roam across North America without any problem in the past. As development and industrialization have increased, these animals have been forced to move to more mountainous areas. This loss of their habitat resulted in a decrease in their population. Even though they are not endangered, they are classified as Threatened. National parks in the US and Canada have strong laws protecting these animals in order to prevent them from becoming endangered.

If you love reading about this species that hibernates in the winter, you should check out these brown bear and North American black bear facts too.

What type of animal is a grizzly bear?

A grizzly bear (Ursus arctos horribilis) is a brown-colored bear.

What class of animal does a grizzly bear belong to?

The grizzly bear species belongs to the Mammalia class.

How many grizzly bears are there in the world?

The population of this wildlife animal is estimated to be approximately 55,000 across the continent of North America. Populations of this North American animal are mostly found in the state of Alaska, where there are about 30,000 of these bears. The other 48 states of America are home to 1,500 of these wildlife creatures. The population of the grizzly bear is 800 in the state of Montana, and across their habitat range, these bears are killed and eaten by animals such as tigers, wolves, and bears.

Where does a grizzly bear live?

The grizzly bear lives in open, mountainous, and forested regions. This wild creature can be found in Canada, British Columbia, Alaska, Mexico, Montana, Idaho, Washington, and many other North American states. Northern America offers the best location for them with the right climate conditions.

What is a grizzly bear's habitat?

This wild creature from North America needs to have a habitat that lets it roam free and hunt. Forested areas and open areas are the right habitats for these wildlife creatures. They have dens where they spend their hibernation period during the winter. The western United States and southern regions up to Mexico are the open areas where these grizzlies use to live freely. However, development in the western region has led to some habitat loss. The western United States isn't as free for them to live in anymore and they have moved to live in the northern Rocky Mountains and more northeastern remote areas with a cold climate.

Who do grizzly bears live with?

The grizzly bear likes to live alone. Many bears feed on fish found in rivers. These animals hibernate in the winter in their dens and are active in the spring until summer. A group of grizzlies is known as a sleuth.

How long does a grizzly bear live?

A grizzly bear's lifespan is generally 15-25 years, although some can also live up to the age of 30 years.

Grizzly bears mature when they are between the age of three and eight and grizzly bear mating takes place from May to July. The peak months for their mating are June and July. A male stays with a female for a month during the breeding season and, after that, they separate. After the breeding season, female grizzly bears hibernate during winter. From January to March, female grizzly bears give birth to two cubs. The gestation period lasts for five months. After the mothers give birth, the cubs feed on their mother's milk. The mother bear takes care of the young cubs until they are two years old. After this, the cubs are on their own. Sadly, most cubs die before they are adults because of predators or diseases.

The IUCN has listed the conservation status of grizzly bears as Least Concern. However, the Endangered Species Act has listed these grizzlies as Threatened. The U.S. Endangered Species Act has ensured the conservation of these bears but habitat loss and predators like cougars attacking grizzlies have resulted in a decrease in their numbers. The U.S. Fish and Wildlife organization has taken measures that are focused on increasing the population of grizzlies. National parks in Canada and the US, such as Yellowstone National Park, Theodore Roosevelt National Park, Banff National Park, and Grand Teton National Park, have also set up programs and rules that aim to help conserve populations of this wildlife creature. It is illegal to kill grizzlies in the wild.

Grizzly bears are brown. They have round ears, large heads, big faces, and very small tails. Grizzlies are known for the muscular hump on their upper back that helps to give them strength when they are digging with their large curved front paws.

At a distance, they look cute and grizzly bears are cute when they are young. Adult bears are cute, too, and are an inspiration for many teddy bears. However, these grizzlies being cute does not mean they should be petted or hugged. Grizzlies are very powerful and you should keep your distance from these wildlife animals. They are also very smart and have an excellent memory.

This wildlife creature that lives in Alaska and Canada uses different movements, sounds, and smells to communicate. Grizzlies moan, growl, and grunt during the breeding season when males fight to mate with females or to communicate with their cubs. Grizzly bears are also known to rub themselves on the bark of trees to scratch and leave a smell that guides other bears.

How big is a grizzly bear?

How fast can a grizzly bear run?

How much does a grizzly bear weigh?

There is no specific name given to a female brown bear and a male brown bear. Both males and females of this wildlife subspecies are known by the same name: grizzly bear.

What would you call a baby grizzly bear?

The grizzly bear species is omnivorous. With 42 teeth, this brown bear eats not only fish and small mammals but also plants and berries. They can eat 90 lb (41 kg) of food a day.

Grizzly bear populations should remain in their natural habitat: forests. They are ferocious animals that are not suitable pets.

The grizzly bear has a grizzled look with brown fur that covers its back and shoulders. This gives them their name.

The majority (75%) of the diet of grizzly bears include leaves, berries, and nuts, despite their big size.

Grizzly bears (males) like to live alone, although this species can be seen in groups when there is a migratory salmon season. Bears from Alaska can eat 25 fish each day before hibernating to have good fat reserves.

These bears, of the species U. arctos, hibernate in dens for around five to eight months in winter.

The breeding time of this animal starts in late spring and ends in early summer, and females fall pregnant when they are about to hibernate. A mother gives birth to two cubs just before summer starts when hibernation ends.

The five toes or claws of this species are long, just like human fingers. They are 2-4 in (5-10 cm) long each.

These animals are known to be great swimmers, and their young cubs can climb trees with ease. This species can also run fast.

To protect themselves from predators, these bears fluff their fur up, stand on their hind legs and try to look bigger. When they feel the need to defend themselves, they growl and pound their paws against the ground, and charge.

If these bears were to go extinct, there would be an imbalance in the food chain, with the population of salmon peaking. So, it's important to save them. We can do so by supporting and sponsoring conservation efforts for the species.

Despite various bear-human encounters being listed almost every year, only a few result in human injury. This is because grizzly bears tend to retreat before a human gets too close to them. However, on extremely rare occasions, grizzly bears have been known to attack and try to eat humans. They do this in a bid to protect themselves.

Here at Kidadl, we have carefully created lots of interesting family-friendly animal facts for everyone to discover! Learn more about some other mammals from our Pyredoodle facts and Merino sheep facts pages.

You can even occupy yourself at home by coloring in one of our free printable grizzly bear coloring pages.