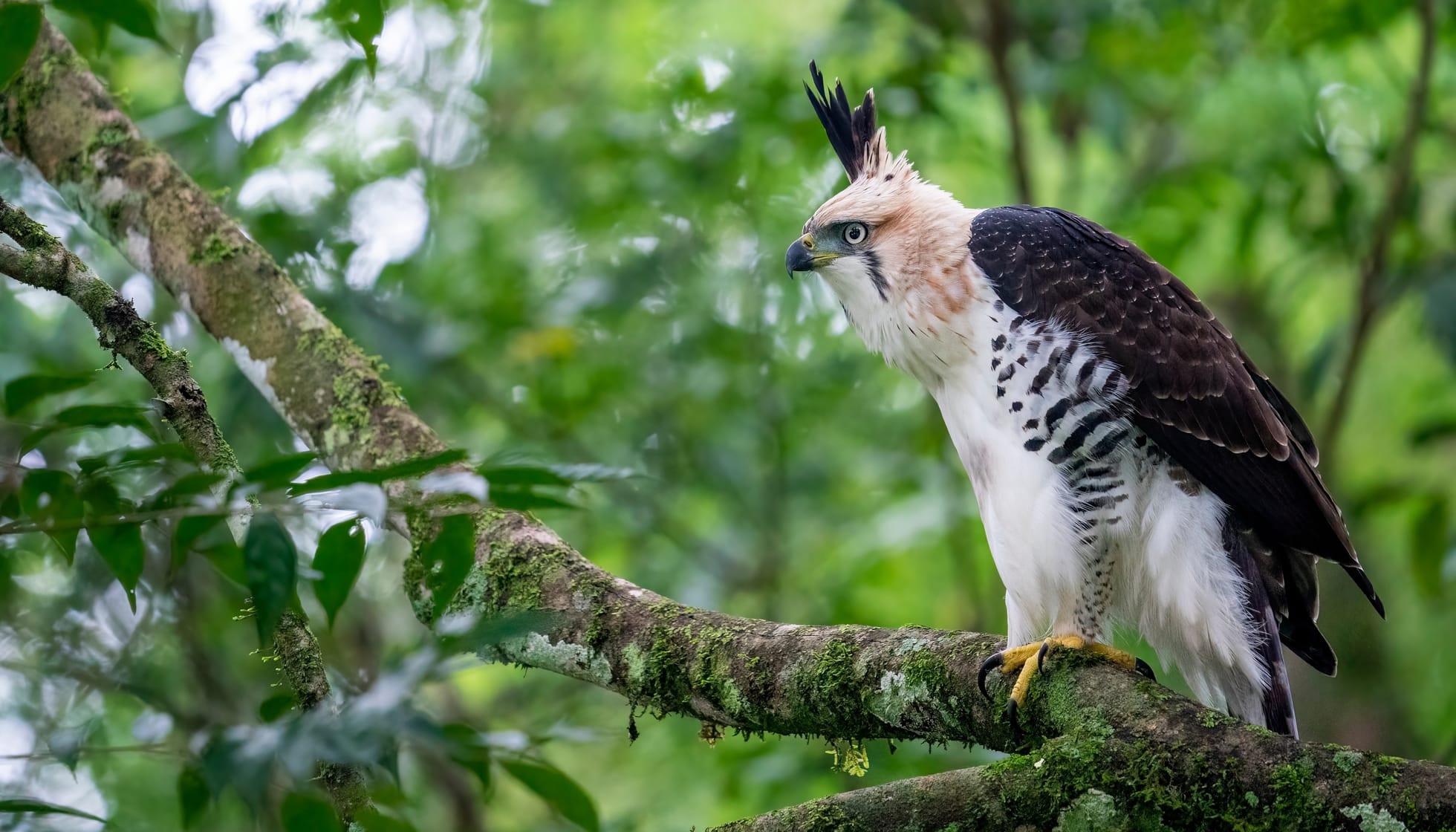 Want to learn cool facts about a powerful eagle? In this article, you will get to learn some interesting facts about the ornate hawk-eagle.

The ornate hawk-eagle (Spizaetus ornatus) is a member of the Accipitridae family of the order Accipitriformes. Largely distributed from southern Mexico, through southern and central America to the Amazon basin, they are one of the greatest raptor species on the planet. Found mainly in the forest interior, they are covered in bright plumage of white, black, and chestnut colors. The upper parts of the body which include the chest and throat area are white. Their chestnut head and neck, black back, and upper wings, with their large black crest, make them stand out among other species. This species of eagle feed on other birds and small mammals. They can be seen hovering high up in the sky in the morning looking for prey. Once they spot their prey, they swoop down swiftly and silently and pick up the prey from the ground or top of trees. Their breeding activity varies at different times of the year, depending on the region. Males and females mate after an elaborate courtship display to lay an egg in their nest. Both parents take part in incubating and nurturing the baby till it is capable of living on its own. Human activities like widespread deforestation and habitat fragmentation have imposed threats on these birds. Their numbers are decreasing, which is why they have been enlisted as Near Threatened.

Continue reading to learn more about these birds, and if you like this article, then check out the hawk and eagle.

What type of animal is an ornate hawk-eagle?

The ornate hawk-eagles are raptors from the Accipitridae family.

What class of animal does an ornate hawk-eagle belong to?

This eagle species belongs to the class Aves of the animal kingdom.

How many ornate hawk-eagles are there in the world?

An independent study by American Bird Conservancy has estimated the total number of these birds currently living on this planet to be over 50,000.

Where does an ornate hawk-eagle live?

What is an ornate hawk-eagle's habitat?

One of the great raptor species in the world, they live in tropical and subtropical regions. Spizaetus ornatus prefer tall wet rainforests; however, they can also be spotted in the pine forests of Mexico and Belize. These birds can be seen in the lowland region and middle elevations, too.

Who do ornate hawk-eagles live with?

These eagles, like most other species of raptors, do not live in large groups. They breed once every two years and during this period, the male and female stay together and take care of the young one.

How long does an ornate hawk-eagle live?

Their average life span is not known yet. However, they are known to live long years like most eagles. Eagles have the longest life span among birds.

Ornate hawk eagles usually mate for life. The male and female of the species build a nest in the fork of a high tree. Made of leaves, twigs, sticks, and other materials, these nests are sturdy and used for several breeding attempts over many years. In Central America, the breeding season lasts from December to September, while in Brazil, it is from August to January. During this time, the female lays one white to pale bluish egg in their stick nest and both parents take part in incubation, which lasts for about 48 days. While the female mostly sits on the eggs, the male finds food for both of them. Once the egg hatches, the male continues finding food, while the female feeds it. When the baby starts flying, which is about 10-13 weeks after hatching, the male spends more time caring for the baby until it becomes fully independent.

Under the International Union for Conservation of Nature or IUCN Red List, the species has been classified as Nearly Threatened. Widespread deforestation and human settlements in and around forest habitats are posing threats to their population.

*Please note this image is of a Black-collared Hawk that belongs to the same family as the Ornate hawk-eagle. If you have an image of an Ornate hawk-eagle, please let us know at [email protected].

The adult ornate hawk eagles do not go unnoticed because of their chestnut plumage, with the added tinge of black and white. These prey species have a white chest and throat, chestnut head and neck, chestnut sides, and black back and upper wings. The underparts of the bird's body are covered in white feathers with bold black markings, which reach down to its legs. The bird has a long black tail with a white tip. Three gray-brown bars are marked across the length of the tail. The birds also have piercing golden eyes, a black hooked beak, and yellow feet. Ornate hawk-eagle wings range between 35.43-47.24 in (90-120 cm) in length. The underparts of the flight feathers have a pale gray coloration with black bars on them. A salient feature of these birds is the long black crest which, although remains flattened most of the time, can be raised when alarmed or curious. The young differ from the adults in terms of appearance.

This is a predatory bird. They swoop down from a high altitude and pick their prey from the ground. Although they have a striking appearance, they are not considered cute by most people.

They make short pipping sounds and repeat their call 2-9 times while they are in the air, to make their presence felt.

How big is an ornate hawk-eagle?

How fast can an ornate hawk-eagle fly?

This bird is a powerful and stealthy raptor. They fly swiftly between perches and often swoop down from high altitudes or well-hidden branches of trees to capture their prey on the ground or on the top of trees.

How much does an ornate hawk-eagle weigh?

What would you call a baby ornate hawk-eagle?

A baby hawk-eagle is called a chick.

The ornate hawk-eagle prey includes many birds and some small mammals. They live by hunting on birds like macaws, parrots, blue herons, guans, and even chickens, among others. Squirrels, rats, certain reptiles like snakes and lizards are also hunted by them. Apparently, these birds of prey can lift animals almost twice their weight and feed on them either by lifting them off the ground and carrying them to their nest or eating their prey on the spot itself.

They are powerful birds of prey, who live by hunting prey. So yes, they are pretty dangerous.

They are birds of the wild and are usually not kept as pets by people.

The main difference between falcons, hawks, and eagles is based on their respective sizes. While eagles are considered to be the largest raptor species, some falcons weigh very little. Hawks are somewhere between the two in terms of size.

Where can you see an ornate hawk-eagle in Yucatan?

We can find them in La Reserva Estatal Biocultural del Puuc. You can also see them at Noh-Bec, Uitziná, Porral, and Chanchakan.

Why are they called ornate hawk-eagles?

The name ornate hawk-eagle is apt for these birds since they are ornate or beautifully adorned in bright plumage with golden eyes, black beak, and yellow cere and feet. These features set them apart from other birds.

Here at Kidadl, we have carefully created lots of interesting family-friendly animal facts for everyone to discover! Learn more about some other birds from our common black hawk facts and mountain hawk-eagle facts pages.

You can even occupy yourself at home by coloring in one of our free printable hawk coloring pages.