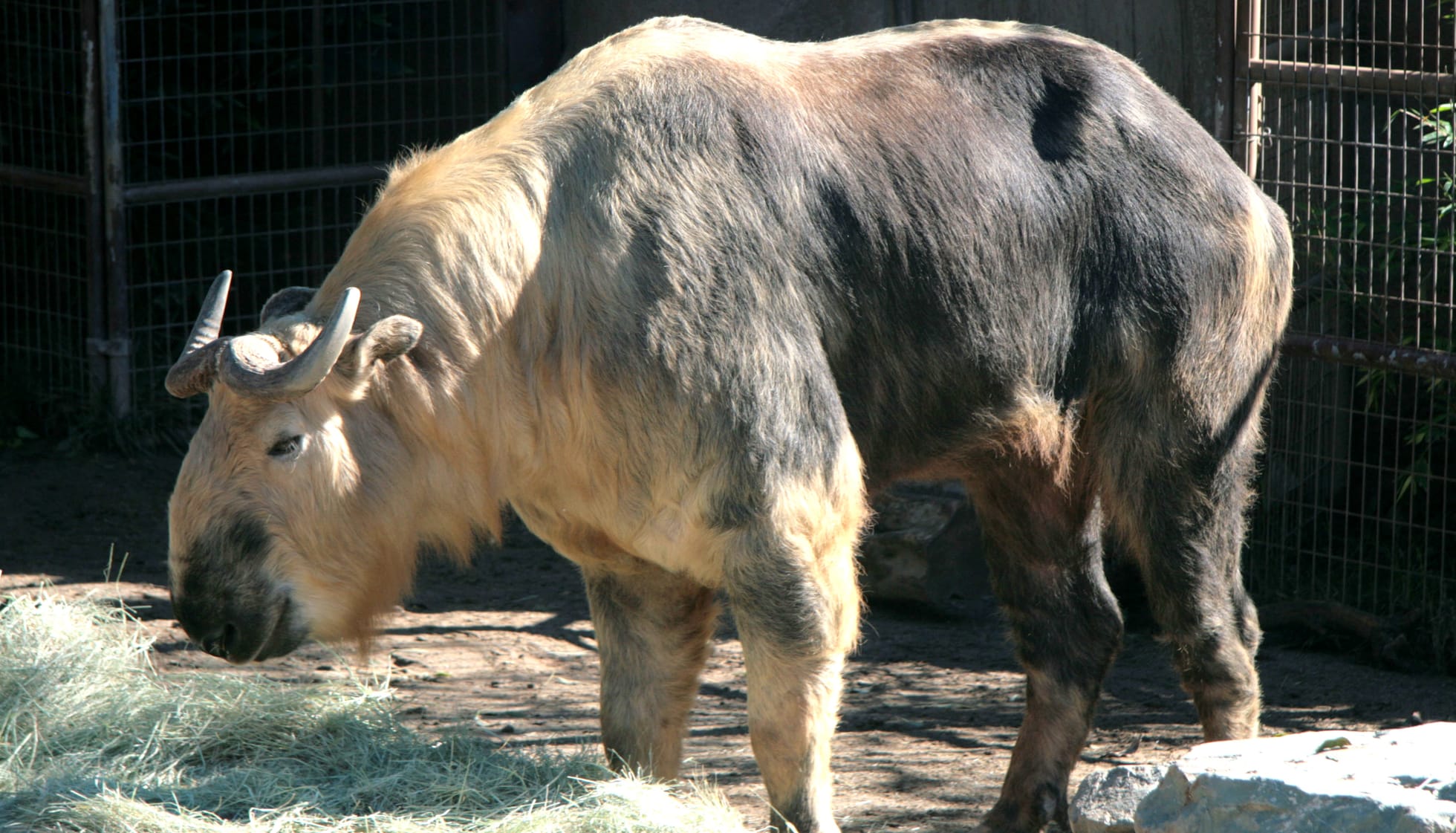 The Sichuan takin (Budorcas taxicolor tibetana), also known as Tibetian takin, is a native subspecies of takin found primarily in Tibet and a few provinces of China such as Gansu, Sichuan, Xinjiang. The term Budorcras has been derived from two Greek words, 'bous 'and 'dorkas,' meaning cow and gazelle, respectively. While 'taxicolor' is derived from two Latin words, 'taxus' and 'hue', and the meaning of the terms are badger and hue respectively.

The species is generally found either in a dark brown or blonde coat. The snout or muzzle is black that possesses large sinus cavities. The sinus cavities help to warm air while breathing. The head has two curved shiny black horns. The species possesses no skin glands, but the skin exudes oil that acts like a raincoat. The average weight and length of the species are 330-882 lb  (150-400 kg) and 67-87 in (170-220 cm) respectively, while Sichuan takin is around 39-55 in (100-140 cm) tall.

The Sichuan takins usually dwell in dense thickets, alpine forests, temperate forests, while barren grasslands also serve as a habitat. The International Union for Conservation of Nature declared the species as Vulnerable. Loss of habitat and hunting are a few major threats to Sichuan takins.

Keep on reading to learn more interesting facts about Sichuan takin. If you want to know more exciting information about different animals, check out the aurochs facts and two-toed sloth facts.

What type of animal is a Sichuan takin?

The Sichuan takin (Budorcas taxicolor tibetana), a subspecies of takin, is a herbivorous animal that primarily eats grass, herbs, leaves, twigs in the wild.

What class of animal does a Sichuan takin belong to?

The Sichuan takins belong to the class of mammals, the Bovidae family, and the genus of Budorcas.

How many Sichuan takins are there in the world?

The exact population of Sichuan takins is not known as of now. Also, the population of the species has been declining rapidly, and there would be around only 7000-12000 takin, the larger species of the Caprinae subfamily left in the world.

Where does a Sichuan takin live?

While talking about the Sichuan takin distribution, the animal is endemic to Tibet and a few provinces of China, such as Gansu, Sichuan, and Xinjiang.

What is a Sichuan takin's habitat?

Who does Sichuan takin live with?

Sichuan takins are diurnal and prefer to live in herds. The size of these herds generally varies. The animals form large herds of around 300 individuals in the winter season. While, in summers, a small herd is found of around 20-25 individuals.

How long does a Sichuan takin live?

While talking about the Sichuan takin life span, the species generally live up to 18 years. It is also said that the takin lives for around 20 years in captivity.

The breeding season of the Sichuan takin (Budorcas taxicolor tibetana) species generally occurs in July and August, and during these months, a small herd is formed. Female takin usually reaches sexual maturity a bit early compared to the male.

Both males and females are involved in several courtship displays. Males generally scream to grab the attention of their partner and sometimes follow the partner by tracking her scent. Males even lick their partners.

The female goes through a gestation period of around 7-8 months, and only a single kid is born. Twins being born is quite rare. The kid weighs around 15.43-17.63 lb (7-8 kg) at birth. It hardly takes 30 minutes for the kid to start walking, and within three days, the young one becomes capable enough to mount high terrains. The kid remains surrounded by their parents for two months. A white patch of hair can easily be seen on the head of the offspring while the horns start developing after six months of birth.

The International Union for Conservation of Nature declared the species as Vulnerable. The population of the animal has constantly been reducing over the years. Predation, loss of habitat, and hunting are the major threats to the species.

The giant Sichuan takin is found either in dark brown or blonde color. The snout or muzzle is black that possesses large sinus cavities. The sinus cavities help to warm air while breathing. The head has two curved shiny black horns. The skin exudes oil that acts like a raincoat.

The way the female Sichuan takins protect their kids is adorable. Also, everyone would love to watch them tumbling while walking right after birth.

Like other species of takin, the Sichuan takins follow the same methods of communication. These animals primarily use touch and sense of smell to get an idea of their surroundings. Also, threatened members would make coughing noises to alert other members of large herds.

How big is a Sichuan takin?

How fast can a Sichuan takin run?

The exact speed of Sichuan takin is not known, but the species is known for deceiving their predators. The herd of the species usually disperse while facing a predator.

How much does a Sichuan takin weigh?

The male is known as bull takin, while the term cow takin is used to refer to the female takin. Generally, male takins are bigger compared to the females.

What would you call a baby Sichuan takin?

Babies of the species are known as kids. Primarily, a single kid is born, while twins are quite rare.

Giant takins are herbivores and primarily prey on grasses, herbs, leaves, twigs in the wild. Their food in zoos sometimes also includes vegetables and fruits. In the wild, these animals are often preyed upon by snow leopards and wolves.

Like other takin species, the Sichuan takins generally do not pose any threats to humans. But if someone tries to provoke them or approaches their territory, the takins can attack. These giant creatures also have sharp horns that can cause severe injuries.

Generally, people do not consider takins as pets due to their unpredictable and aggressive nature. Also, it is illegal to keep them in captivity due to the population decline of the species. It is advised to take conservation steps at the individual level to protect the species as because of us, the numbers are falling badly.

The Bhutan takin, Tibetan takin, Mishmi takin, and golden takin are the four subspecies of takin.

Takins are also known as gnu goats as they possess similar features to goats but are closely related to the Barbary sheep. Unlike goats, takins are not domesticated.

The population of the species is currently endangered due to habitat destruction, predation, and overhunting. Also, the International Union for Conservation of Nature declared the species Vulnerable.

What is takin called in Dzongkha?

In the official language of Bhutan, Dzongkha, people refer to takin as Dong Gyem Tsey.

Here at Kidadl, we have carefully created lots of interesting family-friendly animal facts for everyone to discover! For more relatable content, check out these takin facts and  Sri Lankan elephant facts pages.

You can even occupy yourself at home by coloring in one of our Sichuan Takin coloring pages.