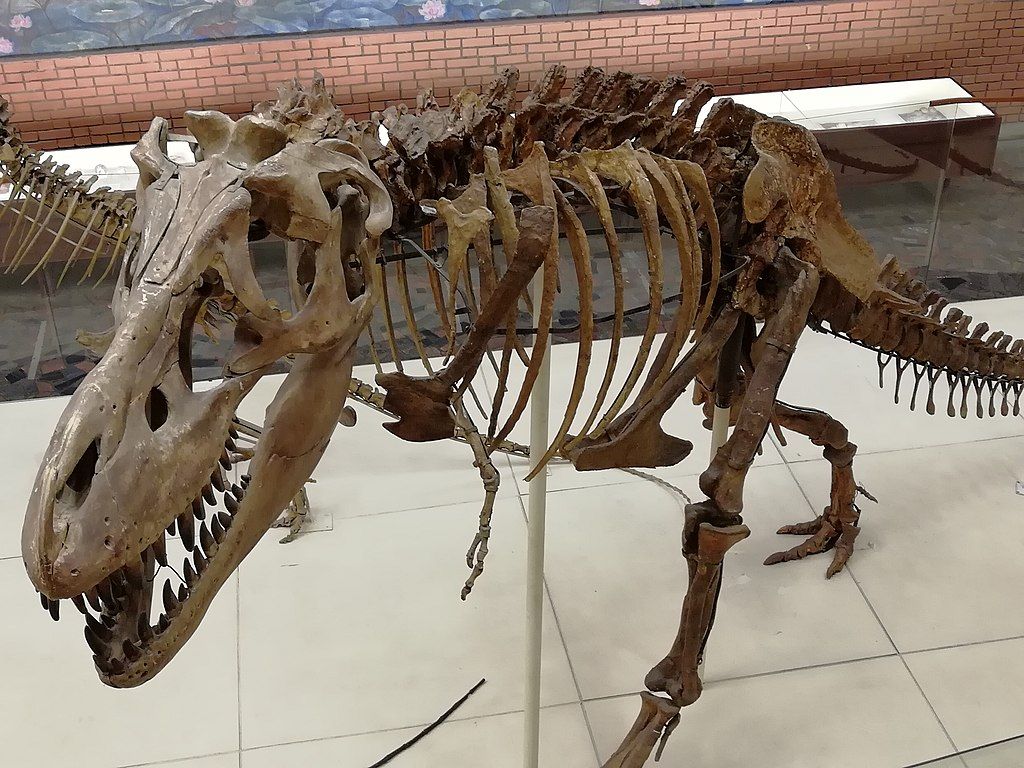 Are you interested to know more about dinosaurs and the information we get from their fossils? If so, then you are in for a treat as we are going to discuss the Shanshanosaurus. It's a debated dinosaur as some still question if it's really supposed to be a different genus. But, Dong Zhiming, a Chinese paleontologist, was pretty sure about it, and he was the one to describe the Shanshanosaurus huoyanshanensis in 1977. However, the fossils of this theropod dinosaur were first found in the mid '60s in the Shanshan County, Turpan Basin of China, Asia.

This dinosaur is said to belong to the Late Cretaceous period, which took place around 100-66 million years ago. The dinosaur fossil specimen has been given the holotype IVPP V4878. Some scientists tried to match the features of the bone structure and stated that it was possibly a juvenile or sub-adult Tarbosaurus. This dinosaur is said to have been carnivorous in nature, and it would have sustained a diet of lizards and mammals.

How do you pronounce 'Shanshanosaurus'?

The name of this dinosaur is pronounced as 'SHAN-shan-oh-SORE-us'.

What type of dinosaur was a Shanshanosaurus?

The dinosaurs from the Shanshanosaurus genus are thought to have been a part of the theropod group. In its classification, the larger family of tyrannosauridae is mentioned. Scientists believe that the Shanshanosaurus huoyanshanensis was a bipedal carnivorous animal.

In which geological period did Shanshanosaurus roam the earth?

The Shanshanosaurus dinosaurs are said to have existed during the Late Cretaceous (Upper Cretaceous) which takes them back to around 100-66 million years ago. The fossil remains of this genus were found in the Subishi Formation situated in the Shanshan County, Turpan Basin of China.

When did the Shanshanosaurus become extinct?

The Shanshanosaurus is believed to have been present on the earth during the Late Cretaceous period, so we can assume that these dinosaurs left us about 66 million years ago.

Shanshanosaurus remains have been found in Shanshan County present in the Turpan Basin of China. This formation is found in the Xinjiang Autonomous Region of China. Scientists suggest that this formation took place between the Campanian and Maastrichtian of the Late Cretaceous period. The Chinese paleontologist Dong Zhiming was the first one to describe the finding of the Shanshanosaurus fossil in this formation.

What was the Shanshanosaurus' habitat?

Who did Shanshanosaurus live with?

It's hard to say if dinosaurs lived in a group or preferred to be alone. However, we can assume that this therapod must have been in close contact with other dinosaurs that lived near its habitat.

How long did a Shanshanosaurus live?

As very few remains have been found of this genus, no one has been able to comment on its exact lifespan. But, if it was as close as Tarbosaurus as some scientists believe, then this dinosaur would have lived for about 25 years.

As you might know, dinosaurs were oviparous in nature. So, the female dinosaurs laid eggs. Most scientists believe that dinosaur eggs were fertilized internally before laying them. We don't really know if the animals took care of the offspring or not.

The Shanshanosaurus is said to have been a bipedal dinosaur from the tyrannosaurids family. So, it would have had strong and larger hindlimbs to support its movement, while the forelimbs would have been smaller. As a theropod dinosaur, it would have had a long neck with three-toed feet. The description of its body from scientists also depicts a pretty long tail.

How many bones did a Shanshanosaurus have?

As scientists have only been able to find partial skeleton remains of the Shanshanosaurus, we won't be able to tell you the number of bones it had in its body. The only fossil specimen found included a partial skull along with some bones.

Well, we don't really know much about how these tyrannosaurids might have communicated. But, in a general sense, dinosaurs are said to have made sounds for communication.

How big were the Shanshanosaurus?

Because only a partial bone specimen was found for the Shanshanosaurus huoyanshanensis, its actual height can't be determined. But, some sources suggest the Shanshanosaurus size to be between 5.9-9 ft (1.8-3 m). At first, the animal was believed to be a small theropod. However, other scientists believe that the bones actually come from a juvenile or sub-adult Tarbosaurus. When we look at the Tarbosaurus individually, these tyrannosaurids were able to attain a size of 33-39 ft (10-12 m). The skull of a Tarbosaurus is said to have been around 4.3 ft (1.3 m) in length and it has around 60 sharp teeth. Because of its large size, it's believed to have been an apex predator.

How fast could a Shanshanosaurus move?

We don't know the speed at which the Shanshanosaurus would have moved. But, as this Theropoda has been assigned under the family of tyrannosaurids, we can assume that it had a speed of around 15 mph (25 km/h).

How much did a Shanshanosaurus weigh?

We don't really know the exact weight of the Shanshanosaurus, as the skeleton specimens are said to be of a juvenile or sub-adult dinosaur. However, we would like to mention that Tarbosaurus is said to have been quite bulky with a described weight of around 11023 lb (5000 kg).

There are no separate names for the male and female of the dinosaurs from this genus.

What would you call a baby Shanshanosaurus?

A baby Shanshanosaurus would have been called a hatchling or juvenile.

Scientists believe that just like the Tarbosaurus, the Shanshanosaurus huoyanshanensis might have also been a carnivorous animal. It's assumed that it had a diet of small mammals and reptiles. But, we haven't been able to get many specimens to confirm the features of a Shanshanosaurus' diet. This theropod would have had sharp teeth that allowed it to tear through meat easily.

Contrary to popular beliefs, dinosaurs weren't really as aggressive as they are sometimes described. Just like the reptiles of today, even the dinosaurs may have got into a fight or two based on the circumstances. But, other than that, the animal would have gone ahead with its life without showing much aggression. As the Shanshanosaurus huoyanshanensis is thought to be a carnivorous animal, it might have been a bit more hostile than the herbivorous theropods.

Other fossils found in the Subashi Formation include that of the Nemegtosauru and the Jaxartosaurus.

The literal meaning of the word Shanshanosaurus is not known.

Why are they called Shanshanosaurus?

The genus is known as Shanshanosaurus as its skeleton specimens were recovered from the Shanshan County present in the Xinjiang Autonomous Region of China. So, the taxonomic name of this species literally stands for the Shanshan lizard.

The fossil remains of the Shanshanosaurus were found in the Subashi Formation of China, Asia. Dong Zhiming was the one to take the initiative to know more about the specimen with holotype IVPP V4878, and he provided the description of a new species called the Shanshanosaurus huoyanshanensis as well as gave the taxonomic division.