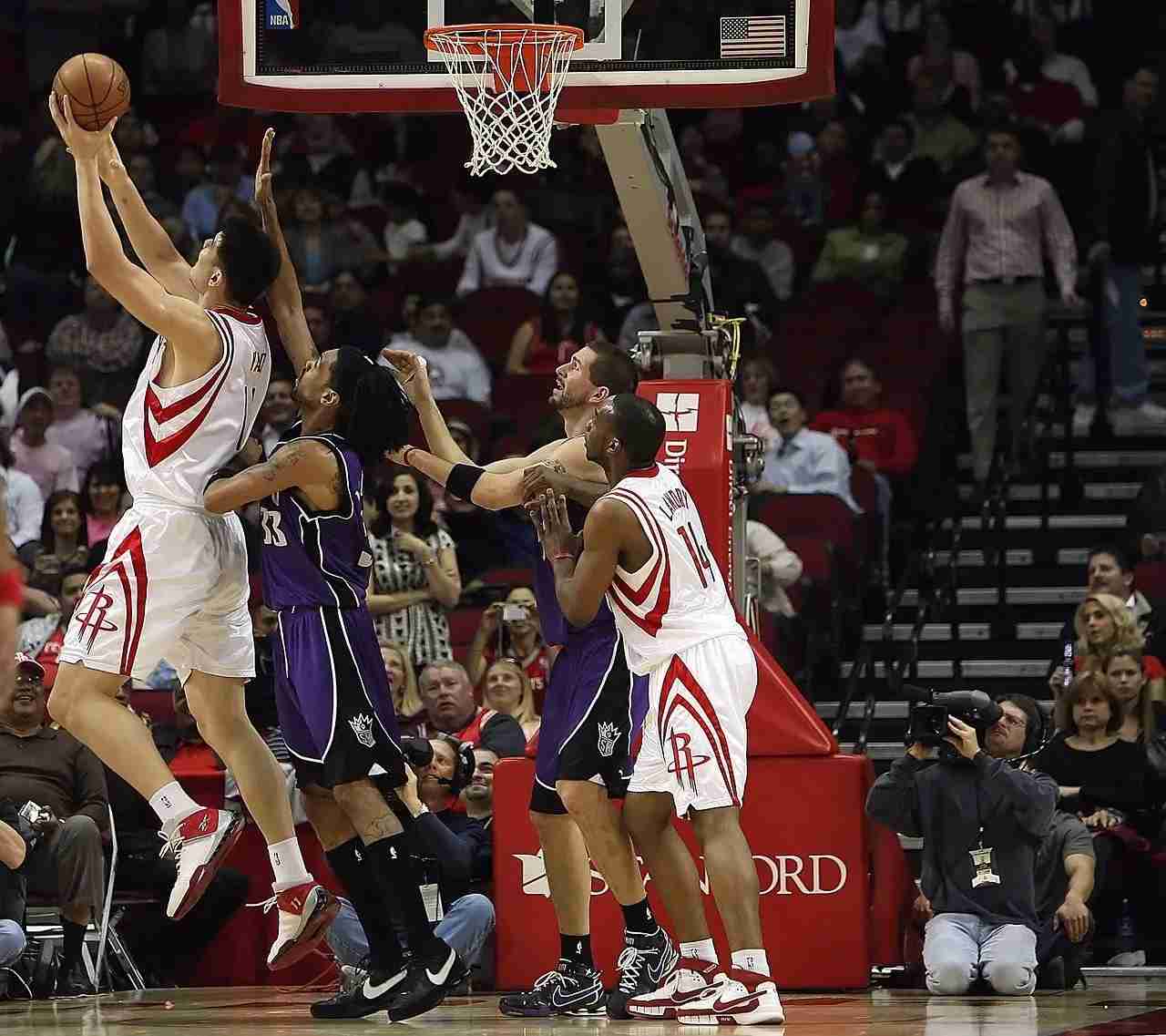 The National Basketball Association (NBA) is not only famous in America but is recognized by people worldwide.

You would have learned how to play basketball in school, from a physical education teacher. Similarly, NBA players were taught in school by their teachers, and rigorous training and practice cemented their names in NBA history.

The NBA is the professional basketball association in North America. The league consists of 30 teams in total, with 29 teams from the United States and one from Canada. The NBA is one of the major sports leagues in America and Canada, the others being the National Hockey League, the National Football League, and Major League Baseball. The Canadian Football League and Major League Soccer are other leagues that are among the main leagues in America. From October to April, the regular season of the NBA is played, with 82 games played by each team in the league. The playoff rounds are played until June. NBA players are the best-paid athletes in the world.

The Dallas Mavericks compete in NBA games and are also America's professional basketball team from Dallas. The International Basketball Federation (FIBA) has given recognition to the NBA, which is also a member of USA Basketball. Some of the other American professional basketball teams are the Cleveland Cavaliers, Chicago Bulls, Miami Heat, San Antonio Spurs, and Milwaukee Bucks, while Michael Jordan, Kobe Bryant, and Lebron James are some of the most famous basketball players in the NBA.

Air Jordans, the basketball shoes, were made for Michael Jordan of the Chicago Bulls. Later, the brand developed and is famous for its good quality products. Bell Russell won around 11 basketball championships with the Boston Celtics. Kobe Bryant and Lebron James are two of the players who played for the Los Angeles Lakers. Kobe Bryant is known for his position as a shooting guard. The NBA is one of the richest professional sports leagues in North America after Major League Baseball and the National Football League, by annual revenue. In the 2021 championship finals, the Milwaukee Bucks won, beating the Phoenix Suns 4-2.

The National Basketball Association playoffs start after the regular season with the top eight teams in each conference (eight from the East and eight from the West) in April.

All the teams play for the Larry O'Brien Championship Trophy, irrespective of the teams' regional layout. The team that had the highest number of seeds has many advantages. The first seed plays with the eighth seed, and in this way, all the teams' top seeds play with the bottom seed. So, in the first round, the team that has the highest number of seeds gets the chance to play against a weak team.

So, now you are acquainted with the fact that home-court advantage is only given to the team that plays the best in its regular season in the league. Generally, playoffs have to follow the format of the tournament. Each team plays with the first team to move on to the next round and has to win at least four games. In this way, in the same league, the same team that is winning the next round has to play with the best next team accordingly.

The NBA finals are basically the final playoff round played among the teams that win the NBA regular season along with the seven best series. The teams play in June, which is held once every year. NBA stars win championships, and the team that wins the NBA finals wins the Larry O'Brien Championship Trophy. The NBA champion team or each NBA player is able to play their best in the championship rings with the help and guidance of coaches and managers.

Along with the NBA championship, the NBA player who performs the best and shows team spirit for the NBA players wins the Bill Russell NBA Finals Most Valuable Player Award. In the 2015–16 season, the league adopted its present format, with the top eight teams in each division qualifying regardless of divisional layout. Previously, the division champions received the top three seeds.

The heads of basketball arenas in the midwestern and northeastern parts of America and Canada in 1946 formed the Basketball Association of America.

The New York Knickerbockers, or New York Knicks, of New York City, were hosted by the Toronto Huskies on November 1, 1946, and it was the first game ever played by NBA players, creating NBA history. Apart from this, many efforts were made in professional basketball leagues such as the American Basketball Association League and the NBL.

However, the first league played in big cities was the Basketball Association of America. In the beginning, they were not that good, but with rigorous efforts and tough competition, they later combined themselves with the NBL, and hence, the National Basketball Association (NBA) was formed. The Harlem Globetrotters were a talented BAA team.

The NBA was formed on August 3, 1949. The league had a total of 17 teams. Almost all of the teams were divisionally aligned. Many had different team sizes, so the league removed many teams from the NBA. The minimum size of the team fixed was eight, through the regular season from 1954-1955.

The teams were the New York Knicks, Golden State Warriors, Boston Celtics, Atlanta Hawks, Los Angeles Lakers, Detroit Pistons, Sacramento Kings, and Philadelphia 76ers. The Golden State Warriors were previously known as the Philadelphia Warriors, the Los Angeles Lakers as the Minneapolis Lakers, the Sacramento Kings as the Rochester Royals, the Detroit Pistons as the Fort Wayne Zollner Pistons, the Atlanta Hawks as the Milwaukee Hawks, and the Philadelphia 76ers as the Syracuse Nationals.

The teams living in the small suburbs moved to the big cities. From 1947-1948, Wataru Misaka broke the NBA color barrier and played for the New York Knicks. Later, the BAA and NBL were integrated. Many African American players took part in order to advance their NBA careers. Some of them were Earl Lloyd, Nathaniel Clifton, and Chuck Cooper. All three players joined different NBA teams.

The Los Angeles Lakers won five NBA championships during the '50s when George Mikan was the leader of the team. He always played the center position. The team played their best during that era. In 1954, a 24-second shot clock was introduced, while in the 1979–1980 regular season, a three-point shot was introduced. Within 24 seconds of the shot clock, the team had to make the shot, otherwise, the ball would be passed on to the other team.

Pau Gasol, one of the most well-known players in the NBA, attended medical school. So you can get the idea that he was good at his studies as well as good at playing basketball. In 2007, the jerseys of the Oklahoma Hornets were able to raise charity funds of $22,000, while they were like any other ordinary jerseys of players in the NBA.

Gerald Green was left with only nine fingers when he lost one of his fingers while dunking. The Twitter icon of a bird is named after the Boston Celtics' Larry Bird. The Los Angeles Lakers and Boston Celtics have won 34 games out of 74 NBA finals, which constitutes 43%. Kyle Lowry of the Toronto Raptors helped to design the ring for the NBA Finals of 2019, and it was one of the biggest rings.

The first basketball game was played with a soccer-like ball along with a peach basket. The hoop is at a height of 10 ft (3 m) from the ground and the rim has a diameter of 18 in (46 cm).

There are many facts about basketball that have not been heard around the country among the people. The National Basketball Association has also worked to attract female players, resulting in the formation of the Woman's National Basketball Association, a professional basketball league founded in 1996. The NBA initially supported and funded the league, but each team later had its own individual and independent owners.

As we have seen, the regular season of the NBA runs from October through April, with each team playing 82 games. The playoff rounds go until June. By profitability, the NBA is the third-richest professional sports league in North America, after only Major League Baseball and the National Football League.

The NBA salary cap for the season of 2019-2020 was set at $109.14 million. China is the biggest international market for the NBA outside America. In the season of 2017-2018, an estimated 800 million viewers were reported. The NBA earns approximately $4 billion in net worth in China. In America, the NBA media coverage is covered by TNT and ESPN. Originally, the league started with 11 teams in 1946, then it was 17 teams in 1949, while now it comprises up to 30 teams.