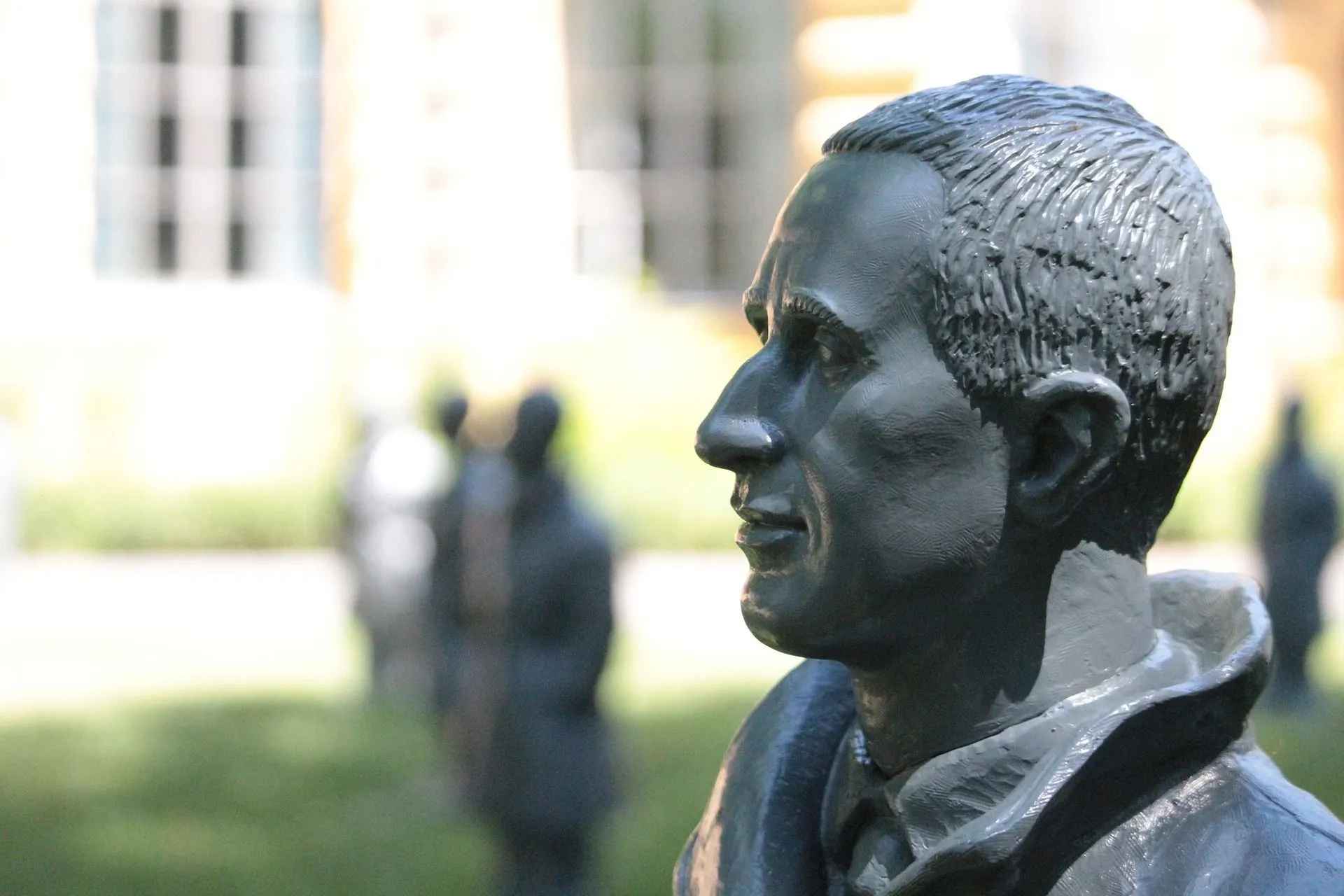 Bertolt Brecht, born on February 10, 1898, in the German city of Augsburg, was a poet, playwright and theater practitioner whose ideas and conventions were instrumental to literature, theater, and drama.

His work 'The Threepenny Opera' was a tremendous success when it was published in the year 1924. The book was written in collaboration with Kurt Weil and the music composer Hanns Eisler. Brecht spent most of his early life in Bavaria, where he studied medicine and later served at an army hospital.

His father was Berthold Friedrich, and his mother was called Sophie. The former was Roman catholic, and the latter was Protestant. Consequently, Brecht's early life was an unambiguous mixture of two different forms of Christianity. Eventually, during the time of his wedding, he was persuaded to have a Protestant wedding. Unlike some of his contemporaries, Bertolt Brecht disliked the influence the Nazis had on Germany. During that particular period, Brecht moved to various places.

He first moved to Scandinavia, and in the latter part of World War Two, he traveled to the United States. Brecht did return to Berlin after the war, where he started a theater company called the Berliner Ensemble with the help of his wife and collaborator Helene Weigel. Brecht's plays, during the war years, openly expressed his rebellion against the national socialist and fascist movement through his work. Some of his notable plays are 'Life of Galileo', 'Mother Courage and Her Children', 'Fear and Misery of the Third Reich', and many more.

Bertolt Brecht, in his last days, kept his writing alive and published some plays, but none of them were as famous as his previous works. Bertolt Brecht's life was dedicated to developing the talents of bright, young directors and theater enthusiasts. Buckow Elegies was one of the best poems of the author.

Brecht's most important poetry is found in his Manual of Piety, which cemented his reputation as a poet.

In other arts, the approach of several chapters in James Joyce's novel Ulysses, Sergei Eisenstein's growth of constructivist 'montage' in cinema, and Pablo Picasso's introduction of cubist 'collage' in the visual arts are all examples of similar inventive dramatic philosophy. Brecht authored the script for Mysteries of a Barbershop, a short comedic film directed by Erich Engel and starring Karl Valentin in 1923.

Despite its lack of commercial success at the time, it is now regarded as one of the most important pictures in German cinema history due to its experimental theater ingenuity and the subsequent success of many of its collaborators. He was an epic theater director who enjoyed writing plays and was famous for his lyrical pathos. He loved documentary theater and Deutsches theater, but Japanese poetic forms led to his interest in poetry. Brecht's technique was unique, and that was Brecht's power.

He wrote short stories along with John Willett. Brecht's tradition and Brecht's dramas were different. Brecht's actual concern was whether people would enjoy reading and watching his poems and movies. Brecht produced 'Die Tage Der Commune', 'mutter courage against Nazi Germany', 'der nacht' and 'Chinese theatre' along with 'Fall Der Stadt Mahagonny'. At the age of 24,  Bert Brecht had changed Germany's literary complexion.

After reading about plays with music, Brecht collaborated with composer Kurt Weill. If you enjoy this article, you can also check out our Bill Brasky facts and Bill Bryson facts.

The Influence Of Bertolt Brecht

Bertolt Brecht's work 'The Caucasian Chalk Circle' and his brilliant directing style have been enormously influential to many directors over the decades!

Playwright David Edgar was an admirer of Brecht's works. He once said, 'Brecht is part of the air we breathe'.

The works published by Brecht during the war years changed the face of modern theater!

Brecht started the most famous theater company, the Berliner Ensemble, with his good friend and collaborator Helene Weigel!

Bertolt Brecht first collaborated with composer Kurt Weil in the year of 1927!

The rock music in the Alabama song was said to have found inspiration in the collaborations of Brecht and Kurt Weil!

Although Bertolt completed his degree in the field of education, his heart was in literature!

Bertolt Brecht was hugely disappointed in the direction Germany was heading, so he put his dissatisfaction into his works and plays!

His second marriage was to Helene Weigel, who was an actress, and they both share a cemetery together!

Brecht's greatest plays of all the time include 'Life In Galileo', 'Mother Courage', 'her Children', and 'The Good Woman Of Setzuan' (all of them written during the period of World War Two).

For his work, 'Rising and Fall of the City of Mahagonny', Brecht received a Drama Desk Award in the year 1970!

In the year 1955, he received the Stalin Peace Prize!

The 'Threepenny Opera' is loosely based on John Gay's beggar's opera!

Bercht suffered from rheumatic fever when he was a kid, so he had an enlarged heart throughout his life!

Bercht was quite a lady's man! He married three times in his life!

Bertolt Brecht received the Kleist Prize in the year of 1922!

His work was famous, and many directors looked up to him for inspiration!

One of the most well-known fictional works of Bertolt Brecht is 'The Business Affairs Of Mr. Julius Caesar'!

Surprisingly, 'Hangmen Also Die' was the only script by Brecht for a Hollywood film!

The Hollywood play produced in 1982 called 'Tales From Hollywood', involves Brecht as a character!

'Mother Courage and Her Children', a very famous rebellious works of Brecht, was given the title of epic theater!

There are certain reports suggesting that Chaplin's monsieur Verdoux was influenced by Brecht !

Epic theater is defined as a type of political theater that addresses contemporary issues!

Bertolt Brecht was filled with artistic abilities and had an insane amount of fans. His works which were created during the restless time of the World Wars, proved to be instrumental and one of a kind. His drama 'Baal' received quite positive reviews from critics. It is indeed not too forward to say that Brecht's work still influences the modern playwrighting and drama field.

Bertolt Brecht died on August 14, 1956, due to a heart attack in east Berlin, East Germany. However, his works found a way to live and flourish.

Here at Kidadl, we have carefully created lots of interesting family-friendly facts for everyone to enjoy! If you liked our Bertolt Brecht facts, then why not take a look at our Bill Nye facts or Betsy Ross facts.