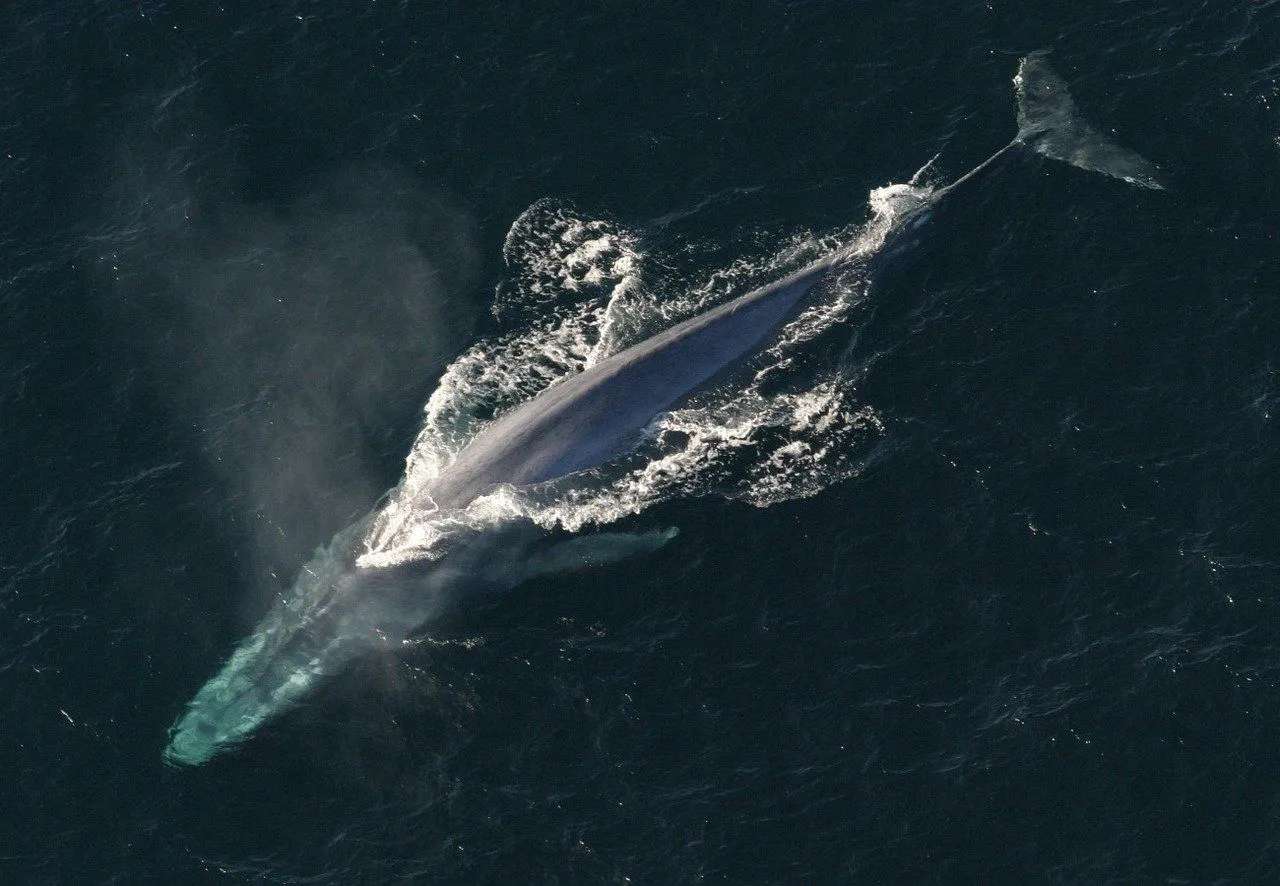 The blue whale is an aquatic mammal and is a member of the order Artiodactyla and family Balaenopteridae, the largest among the baleen whales, including the humpback whale.

In the past, blue whales were found in plenty near all of the Earth's oceans. By the end of the 19th century, they had become scarce due to overhunting.

In 1966, the International Whaling Commission strictly prohibited the hunting of blue whales. It has been listed that blue whales are endangered by the International Union for Conservation of Nature. There are about 10,000–25,000 individuals remaining today. However, these aquatic mammals still face threats from nature, humans, climatic change, water pollution, ocean noise, and more.

They are primarily found in oceans across the world, like the Antarctic ocean, the North Atlantic ocean, the North and South Pacific oceans, and the Indian ocean. The Society for Marine Mammalogy's Committee on Taxonomy has categorized these species into four subspecies: blue whales in the North Atlantic and North Pacific, in the Southern Ocean (Pygmy blue whale), in the Indian Ocean, and the South Pacific Ocean, and in the Northern Indian Ocean.

Blue whales are carnivore animals and mostly feed on krill, or shrimp-like animals. An adult whale can eat up to 7,900 lb (3,600 kg) of krill. The blue whale reaches sexual maturity at the age of 10 years old and when the female whale has an average body size of 77 ft (23.5 m).

Cetaceans are aquatic mammals of the order Cetacea, for example, porpoises, whales, and dolphins. These cetaceans are again subdivided into two types: baleen whales and toothed whales. There are around 19–21 types of whale. Let's look at some popular ones:

Fin whale: It is the second largest mammal in the world after the blue whale. These whales are also known as 'greyhounds of the sea' due to their sleek appearance. Fin whales love to travel alone. They do not like to move or play in groups. They eat small fish, squid, and krill. They have a life span of 80-90 years.

Humpback whale: Humpback whales are baleen whale species of medium size, known for their breaching behavior. Their body size ranges from 39–52 ft (12–16 m) and they weigh around 28–33 short ton (25–30 met ton). A complex song is produced by the males, which lasts for 10-20 minutes. These species eat krill rather than fish.

Sperm whale: Sperm whales are known for having the largest brain size of all the mammals on Earth. They have the largest jaws. The life span of this species is 70 years. The sperm whale is the largest member of the toothed whale family among all mammals.

Orca whale: The orca, or killer whale, belongs to the dolphin family. Their body size is between 276-383 in (701-975 cm) length. They are carnivores, and their main diet consists of fish and seals. They do not have natural predators. They have a life span of 30-90 years.

The blue whale's age is calculated depending upon the layer of earwax (cerumen). Blue whales have an average lifespan of between 80-90 years, and a few can reach the age of up to 110 years.

We hope you enjoyed learning some of the interesting facts about the blue whale brain. Why not have a look at the other similar articles like mouse bite and goat hair here at Kidadl.

﻿How smart is a blue whale?

The blue whale is an intelligent and smart animal compared to the other marine animals in the world. Their intelligence level is quite high.

A lot of information has been collected from the research done on dolphins. Whales and dolphins are the brainiest among all the cetaceans. Not only do they have a large body size, but they also have a sharp and big brain.

Orcas and blue whales are considered killer whales. They both have large bodies and large brains. Both of them are smarter. When judging intelligence, researchers have to keep a range of things in mind, such as the number of cells in the brain, resolving issues, navigating, communication, and more. Let's find out who is more intelligent.

There is no second thought that the blue whale is an intelligent animal. The ability of blue whales to navigate in deep and large oceans demonstrates their intelligence. These species are so intelligent that they can work out a plan to chase the krill. Finding the krill is a difficult task; krill are small aquatic prawn-shaped animals that are blue whales' favorite food. These krill are usually found very far from where blue whales give birth to their children. Despite the long-distance, these whales use their intelligence to find these krill. Blue whales have excellent communication systems among their communities. Blue whales are good at teaching their young ones how to behave. For example, they teach them how to hunt, fight, search for food, and navigate long distances in the ocean.

Orcas are similar to large dolphins but with different qualities. They have large brains relative to their body size. Orcas are perfect as a team and hunt in groups for fish, other mammals, and even whales. Thus, these mammals are also known as killer whales. Orcas are also good communicators and use different languages to communicate. Orcas teach their young ones what to do, such as play, hunt in groups, sneak up on a seal, and grab it before sliding back to the water surface.

Both the blue whale and the killer whale are equally intelligent. They exhibit their intelligence in their ways and behavior, and it is difficult to predict who is smarter and who is the most intelligent. Below are some fantastic facts about the blue whale; we bet you have never heard of it!

Blue whales are the largest animals, weighing nearly 33 elephants. Blue whales can breathe air like humans and dolphins can. They rise to the surface of the ocean every 5-10 minutes to refill the air in their lungs. It is an amazing fact that even whales can sing songs like humans. Males sing to attract females, while female whales sing for their young ones. The blue whale is the loudest mammal on Earth. This mammal has the largest heart weight of 440 lb (199.5 kg). Blue whales have no teeth but have 270-395 baleen plates on their upper jaw and 60-88 expandable throat pleats. These big-brain mammals love to sleep in shallow water and could stay awake for months.

The milk of the blue whale contains 50% fat and is rich in proteins, and it looks like toothpaste.

How big is a blue whale's brain?

The brain is an essential and wonderful organ found in both human and animal bodies. The brain's primary function is to transfer information from the brain to other parts of the body and control breathing, the heart, and other organs. In comparison to their body size, killer whales and dolphins have larger brains.

Researchers have found that a specific type of brain cell, known as 'spindle ' neurons, found in humpback whales can also be seen in great apes, humans, and other cetaceans such as dolphins.

How much does a blue whale brain weigh?

A few species of mammals, including dolphins and killer whales, have different brain sizes. Blue whales are highly complex but have small brain size relative to their body size.

The sperm whale's brain is the largest brain among all mammals with higher intelligence. It is five times more than the human brain. The killer whale has the second heaviest brain. They are known for their intelligence, which is different from humans. They could be easily trained in captivity.

While the blue whale is the largest cetacean, it is not the same with its brain. The blue whale brain is relatively small compared to other whales. The number of neurons in the brain determines how well the brain can retain activity. Blue whale brain weight averages 13.22-19.84 lb (6-9 kg).

What is the blue whale brain volume?

The evolutionary significance of the brain is its size, and it is difficult to determine if the size is measured in weight or volume.

A blue whale's brain size is smaller than other mammals and is about 15.26 lb (6.92 kg). Many researchers believe that larger brains such as whales and elephants can resolve the problems; they can learn and transfer their knowledge to others. They enjoy playing in the water. Like humans, they also have a brain and are intelligent, and they should have the freedom to live. Hence, WDCS, the first NGO, declared that all whales and dolphins have the right to life, liberty, and welfare. These aquatic mammals are the beauty of the oceans, and we need to protect and preserve them in the wild. We hope this article was exciting and provided a beautiful image of this aquatic animal.

Here at Kidadl, we have carefully created lots of interesting family-friendly facts for everyone to enjoy! If you liked our suggestions for blue whale brain, then why not take a look at what do baby birds eat or blue whale facts.