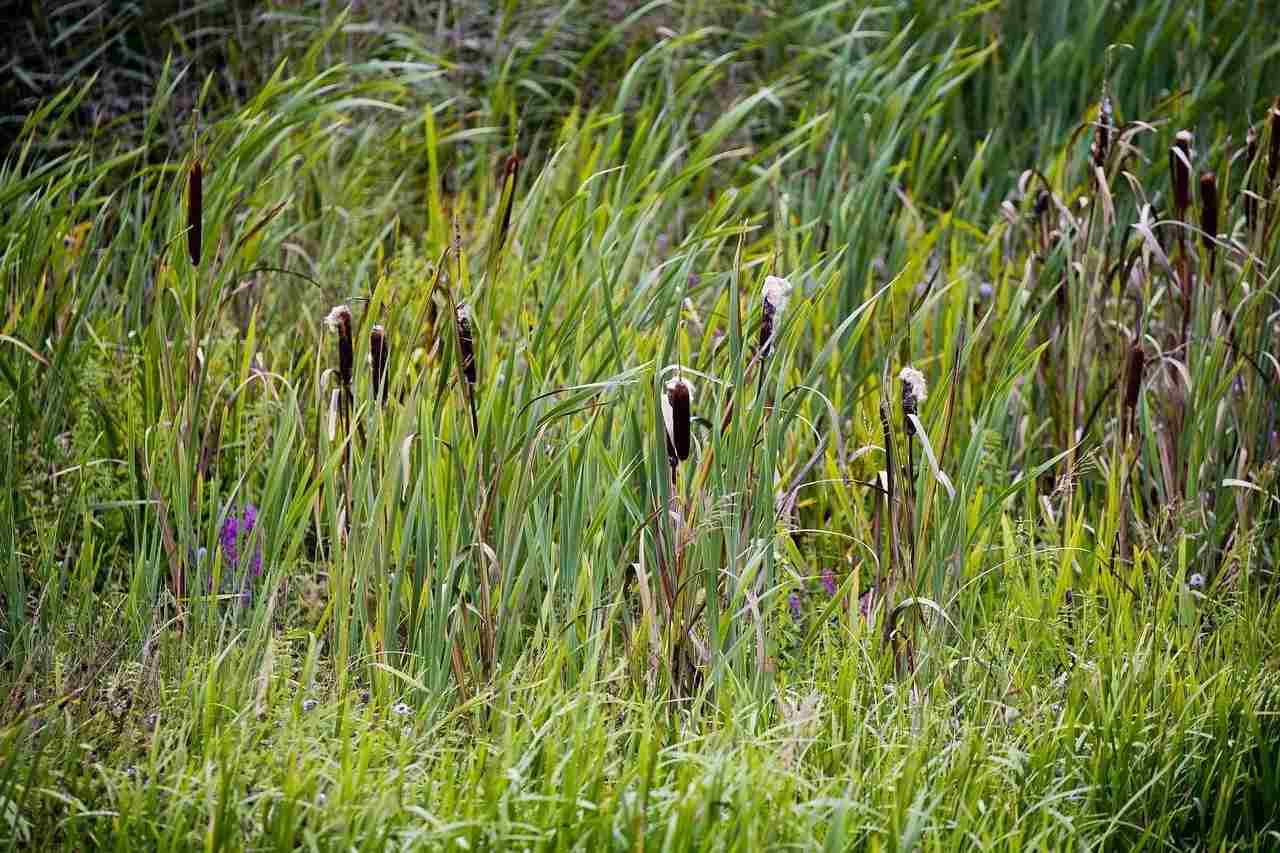 There is water flooding in such wetlands either permanently (for years or decades) or seasonally (for weeks or months) and the flooding results in oxygen-free soil. The most crucial factor distinguishing wetlands from terrestrial land forms or water bodies is the characteristic vegetation of water plants, which are uniquely adapted to survive in soils without oxygen.

The bulrush is referred to as reedmace in the UK. In Ireland, it goes by the name black paddies. There are 14 different types of bulrush plants in North America alone, and three of these are common in Texas.

If you find this an intriguing read, you can also check out articles on cactus-like plants and dangerous plants.

Bulrush is a common name used to refer to a large group of grass-like plants of the sedge family. The bulrush may be an annual plant or a perennial plant, meaning it may live up to a year or longer. This plant is also known as tule or wool grass.

Bulrushes in the biblical reference is of the genus Cyperus. In North America, the bulrush is of the genus Scirpus. The Botanical Society of Britain and Ireland has used the term bulrush to refer to all the plants in the genus Typha. The stem is usually hollow, with its base being thicker than near the flower. It grows to 6 ft (1.8 m).

The bulrush as a species has two types of leaves and they are either well-developed or blade-like. Leaves attach to the plant near or at the base of the plant.

The flowers consist of solitary or clustered spikelets. Each spikelet can have 50-500 flowers. Each flower has one scale under it, thus supporting it. These usually bloom from April to August.

Each flower has one seed. One surface of the seed is flat while the other is bulging. Its flowers are wind-pollinated. It is usually spread by a rhizome, which is an underground stem.

Both the bulrush and the cattail belong to the same family but are two different genera. What this means is that they may share quite a few standard features but will have slight variations structurally. Cattail leaves are much flatter and sword-like, while leaves of the bulrush are more reed-like.

In South America, the bulrush is commonly called 'common three square.' Although a member of the sedge family, it is surprisingly fire-resistant, a feature not commonly found in the sedge family. This property is attributed to the sturdy stem of the plant.

The bulrush provides habitats for fish. Once sand is swept away from the base of the plant, the dense roots are exposes. These roots provide excellent cover for young fish.

The bulrush also has medicinal values. It was used as a diuretic, and its roots and leaves were used to help heal sores and other wounds.

Bulrushes are sedges that colonize ponds, lakes, and areas adjacent to running water (riparian areas). Bulrushes can have either hard stems or soft stems, and both are important to aquatic diversity.

The bulrush is usually found in temperate regions of the world, particularly in wet meadows, muddy areas, and swamps. Of late, they have also been spotted in south and southeast Asia as two of its species have been reported as weeds in the rice fields of Japan.

Being one of the pond plants, it grows at the edges of ponds, and it lines pond margins forming a dense region along the pond banks. Bulrushes are also known as marsh plants.

When there is a drastic need to cut down on the plant population, it is recommended that registered aquatic herbicides be used. These aquatic herbicides must be used with caution, and all the instructions for application must be strictly adhered to in order to avoid harming wildlife. After a sufficient amount of plants have been reduced, cutting under the water's surface will help control the bulrush in ponds and small water bodies.

Typha latifolia is a bulrush found in British Columbia and has been part of the province's indigenous cultures. It has been a source of food and medicine. Its rhizome is edible after cooking. Its stems, once peeled, and leaf bases are eaten raw. The pollen from mature cones is used as a seasoning.

Scirpus validus is a soft-stemmed bulrush and is a native of South America. Ponds, marshes, swamps, wet prairies, and other damp or moist conditions are ideal for planting this perennial plant. These plants like silty or peaty soils and grow in clusters with a 4-5 ft (1.21-1.52 m) spread, though they are tolerant of a wide range of soil types.

Animals That Eat The Bulrush

The seeds of these plants are food for ducks and some birds. The underground stem or rhizome of the plant, as well as its young shoots, are eaten by geese and muskrats. Many water invertebrates, such as fish, and other animal species, such as reptiles, ducks, and some amphibians such as frogs, feed on the decomposition of these aquatic plants.

Uses Of The Bulrush Plant

Being a reed, the bulrush has many uses, not just for humans but also for animals. The bulrush has a crucial role to play in the pond ecosystem. Bulrushes are perennial wetland plants that act as valuable filter plants in wetlands. The bulrush is also an attractive ornamental plant to have in ponds. The bulrush provides stability to the shoreline and helps prevent erosion.

The bushy base clumps of bulrushes offer dense shelter from predators to all types of small animals visiting the edge of the pond, including frogs, newts, shrews, toads, and water voles.

The bulrush acts as an emergence route to damselfly and dragonfly larvae and the anchoring point as they leave their pupal stage at the end of their metamorphosis.

Bulrushes act as water purifiers as they filter and absorb poisonous metals and toxic microbes, thus purifying and protecting water bodies and marshes they grow in.

Young shoots, pollen, seeds, the inner part of the stems, the stem base, and roots called rhizomes are all fit for consumption. The bulrush is also used to make flour, syrup, and sugar and is also eaten raw in salads or as cooked vegetables.

The carpels of the bulrush's inflorescence are like soft fluff used as insulation and for stuffing pillows. Its seeds are pressed for oil.

As the Bulrush is a reed, it is commonly used to make different kinds of mats. Schoenoplectus americanus is also called the chairmaker's bulrush, and it has a global presence, particularly in the western hemisphere, including New Zealand.

Here at Kidadl, we have carefully created lots of interesting family-friendly facts for everyone to enjoy! If you liked our suggestions for 111 bulrush plant facts then why not take a look at facts about plants or bean plant facts.