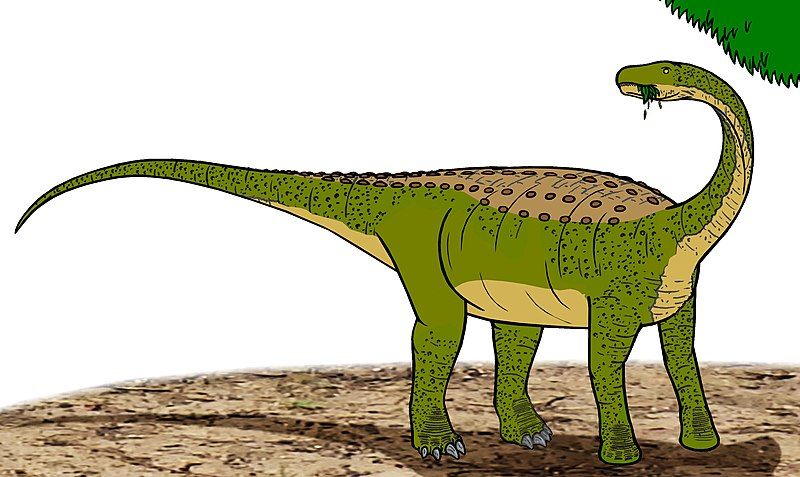 Magyarosauru dacus, an inhabitant of modern-day Romania in Europe, is a fascinating dinosaur, mainly known for its small size. This dinosaur existed 66-72 million years ago, in an area known as the Hateg Island. The remains of this species were discovered by Baron Nopcsa. It has an estimated length of 20 ft (6 m), with a weight of 2425 lb (1100 kg).

Magyarosaurus is often described as being the smallest known member of the Sauropoda group. These dinosaurs were herbivorous and relied on the various plants available during that time. The physical appearance of the Magyarosaurus was unique due to the presence of irregularly shaped bony plates that covered its body. Though a complete skeleton is yet to be established, partial remains of 10 individuals of this kind have helped researchers establish a lot of essential features about this dinosaur, enriching paleontology findings beyond measure. Although the life history of Magyarosaurus is not well-known, the discovery of 14 eggs, possibly belonging to this species has certainly been a helpful find. Additionally, bone studies have further revealed the history of this smallest known sauropod, as it has shown they were fully grown adults.

Dwarf size with a long neck and short limbs

How do you pronounce 'Magyarosaurus'?

The Magyarosaurus pronunciation is 'Mag-yar-oh-sore-us'. This nomenclature was done by Friedrich von Huene in the year 1932.

What type of dinosaur was a Magyarosaurus?

In which geological period did the Magyarosaurus roam the earth?

When did the Magyarosaurus become extinct?

The end of the Late Cretaceous 66 million years ago was characterized by a mass extinction event that wiped out the dinosaur population from the face of the earth. So, this member of the Titanosauria clade also became extinct in that event.

Where did a Magyarosaurus live?

The remains of Magyarosaurus were discovered by Baron Nopcsa from an area that is now a part of Romania. However, when the remains were discovered, this region belonged to Hungary. Back during the Maastrichtian period, this area constituted the Hateg Island. This island was entirely separate from the landmass which later developed into Europe. These dinosaurs lived in the Sânpetru Formation.

What was a Magyarosaurus's habitat?

The description of the ecology of Hateg Island consists of several key features. With a predominantly subtropical climate, this island had tropical plants encompassing the landmass. There was also a sufficient supply of rivers and streams in this region, which explains why tropical plants requiring a lot of water could grow here.

Who did a Magyarosaurus live with?

Researchers are yet to explore the social patterns of Magyarosaurus dinosaurs. However, during the age of Magyarosaurus, a number of other species of dinosaurs and pterosaurs also inhabited the same region of present-day Romania. These animals include Telmatosaurus, Balaur, Hatzegopteryx, and Elopteryx.

How long did a Magyarosaurus live?

Though the exact lifespan of this dinosaur is yet to be ascertained, its osteological features have led researchers to believe that these dinosaurs had a short life expectancy. This was further backed up by the fact that the members of this group reached sexual maturity early.

Magyarosaurus were oviparous like all other dinosaurs, and hence, were egg-laying. Researchers have excavated 14 dinosaur eggs from the area in Romania where the remains of this dinosaur were found. Hence, it is quite possible that these belong to members of this species. Some of the features of the eggs are the presence of minuscule plates and scales. There are theories suggesting these structures contained minerals. So, when the resources were sparse, this dinosaur would end up reabsorbing its egg.

The unique appearance of Magyarosaurus dacus makes reading about its physical description quite fascinating. Even though, all the physical features related to this dinosaur of the Cretaceous are yet to be established, researchers have been able to provide an overview of what these early dinosaurs looked like.

A unique feature of this Romanian species is that they were dwarves. Even though they belonged to the group of sauropod dinosaurs, compared to other species of this group, the Magyarosaurus was considerably smaller in length. These sauropods walked on their four feet, which were somewhat short and pillar-like. Since Magyarosaurus dacus belonged to the Sauropodomorpha clade, they had considerably long necks. The collected fossil specimens of Magyarosaurus reveal that these dinosaurs had dermal plates or osteoderms covering its body. These bony plates were of irregular size and shape. Additionally, the recovered bones revealed that the centrum of the vertebral column belonging to the members of this species was quite elongated, having a length of 4.1 in (10.5 cm)

How many bones did a Magyarosaurus have?

Since an entire skeleton of this species is yet to be recovered, researchers have not been able to figure out the total number of bones this member of the Titanosauria clade possessed. Nevertheless, the fossil representation of this dinosaur is not that bad, as bones belonging to 10 individuals have been recovered to date. Out of all 10, the holotype specimen consisted of vertebral columns. Apart from that, scapula and humerus have also been unearthed. Unfortunately, the Magyarosaurus skull is yet to be recovered. Nevertheless, these discoveries have made it much easier for researchers to provide a good description of this species and its features.

While there is limited research on how the Magyarosaurus communicated, overall, those belonging to the Dinosauria clade relied on vocal methods like hoots and hollers in order to communicate. Beyond vocalizations, these animals also took part in visual displays like dancing. Therefore, the members of the genus Magyarosaurus most likely utilized a similar set of methods.

How big was a Magyarosaurus?

The Magyarosaurus size is definitely worth mentioning, as despite being a sauropod, these dinosaurs are perhaps one of the smallest of the group. This sauropod had a height of 6 ft (2 m), and a length of 20 ft (6 m). Earlier, suggestions were made that these dinosaurs' specimens do not prove that the species was dwarf, as the bones could've belonged to juveniles. However, further research has proven that the recovered fossils represent adult individuals of this genus. Hence, this was their maximum body size. In comparison to Argentinosaurus, another titanosaur that had a length of nearly 131.2 ft (40 m), and belonged to the clades of Saurischia and Sauropoda, the Magyarosaurus dacus was nearly seven times smaller.

How fast could a Magyarosaurus move?

In general, research has suggested that sauropod dinosaurs could run at a speed of 4.5 mph (7.2 kph) or more. Since Magyarosaurus is also a sauropod, it probably had a similar running speed. However, being a small species, it is also possible that Magyarosaurus had limited mobility, due to smaller legs.

How much did a Magyarosaurus weigh?

A further overview and research into this dwarf species revealed that it had a weight of 2425 lb (1100 kg).

The male and female sauropods of this group of the Late Cretaceous period have no specific names.

What would you call a baby Magyarosaurus?

A baby Magyarosaurus would be known as a hatchling.

Magyarosaurus was a herbivore, so its diet was limited to plants. It probably fed on the dominant tropical flora of the time.

Given the size and diet of this Romanian dwarf dinosaur, it is highly unlikely that it was aggressive.

The 'Magyarosaurus' name means Magyar lizard. Magyar is the name of a tribe that belongs to Hungary.

Why was the Magyarosaurus so small?

The discovery of Magyarosaurus, deemed to be one of the smallest sauropods, led researchers to explore the reasons behind its dwarf nature. The most prominent explanation came from Baron Nopcsa himself, who believed that this small dinosaur was possibly a result of insular dwarfism. To put it simply, unlike other large sauropods, Magyarosaurus was significantly smaller in scale due to the absence of large predators in its natural habitat and a limited supply of food. This phenomenon is also known as 'island rule'. However, it is also essential to note that, not every dinosaur inhabiting that same ecology had reduced size.

How did the Magyarosaurus protect itself?

Despite their small size, the adult dinosaurs of this species had certain characteristics that helped them in protecting themselves. For instance, the dermal plates or osteoderms on their bodies certainly played a role in protecting the animals against predators. To add to that, these dinosaurs possibly swung their tails from side to side to whip predators, similar to how their relative titanosaurs behaved when faced with danger.

*First image is by Conty.

*The second image is by N.Cayla.