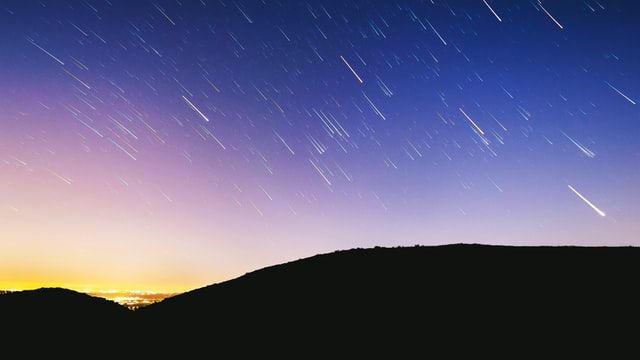 Every time we hear about meteors, we are often reminded of high school science books.

To put it in simple terms, the 'shooting star' or the 'falling star' that has been romanticized in films is the meteor. The Solar System is indeed a vast abode.

Meteoroids are space rocks that orbit the sun. A meteorite is the smaller version of an asteroid and it can hit the Earth at any point. Meteoroids look like flashes of light shooting across the sky, but they are of different types. Meteoroids can be termed as 'space dust' or 'asteroids' in smaller versions, whereas meteors are the fireballs or the 'shooting stars' or 'falling stars' that hit the Earth when meteoroids enter the atmosphere at full speed. The stars emerge from dust-sized particles instead of large objects. When a meteoroid that travels through the atmosphere hits the ground, it is a meteorite. Several meteors can be located at every hour in the night sky. When this number increases, these meteors are termed as 'meteor showers.'

The Solar System is a fascinating subject to study about. A meteorite is a space rock, and unlike normal rocks on Earth, they are the specimens of other parts of the universe such as planets or an asteroid, and some even contain particles that existed before the planets and the Sun came into being. The size of a meteorite can differ too. Sometimes it can weigh up to 60 lb (27.2 kg), or it can take the form of air particles, or beach pebbles.

It is believed, according to scientists, that there are different kinds of meteorites. Stony meteorites are made of silicate minerals which are characterized into two different types, chondrites and achondrites, which have further subgroups as per the composition of the meteorite. When radioactive elements solidify from their molten form, the substance experiences both physical and chemical changes and the resulting structure is very similar to the planets.

Iron meteorites consisting of metal mostly are believed to be the dark core of asteroids. An iron meteorite can give us information about what the metallic cores of a planet and a planet's surface are made of, and it features specific crystalline physiology. Due to the mixture of minerals and the other constituents, and a difference in texture, these types of meteorites can be classified into many other subgroups.

Almost every day a large amount of space debris hits the surface of the Earth. Some might be debris dust particles hitting the Earth's surface while some fragments are graver in terms of the attack it comes with. The ones falling from the sky causing a flash are called a ' superbolide', but sometimes it can get bigger. Some of the most famous meteorites that hit the Earth's surface are:

Chelyabinsk, in 2013, was caused in southwest Russia. Several people were injured by the shockwave that got too close to the Earth. Later, as evidence, dust debris in the form of rock fragments was found around the Earth's surface revealing that it was a non-metallic meteorite about 65 ft (19.8 m) across.

One of the oldest, most popular instances of a meteorite hitting the Earth is Vredefort and the carter is about two billion years old. The meteorite was huge, it was said to be 6.2 mi (10 km) wide.

Tunguska meteor in 1908 that had taken place over the Tunguska in central Siberia, is a famous meteor event in history. This meteorite was massive enough to flatten out about 124.2 mi (200 km) of trees.

Allan Hills 84001 is a Martian meteorite that weighed a lot less than the previous ones discussed, with a size of about 68.1 oz (1930.90 g) but it possibly had signs of Martian life. The idea of NASA about this theory was so impactful that President Bill Clinton had conducted a conference on it on the day of the occurrence. It was deduced that the rock was blown from the surface of Mars about a million years ago by an asteroid attack and eventually had landed in Antarctica 13,000 years ago. The outlines of these were of organic molecules, tiny cells, iron-containing deposits.

The scientific study of meteors and other elements related to them in the Solar System is called meteoritics.

Before 1860 and the fall of L'Aigle, a meteorite in France, meteors, and meteorites were believed to be superstitions.

Usually, to research meteors, it is important to understand their composition. For example, minerals are an indication of physical and chemical metamorphosis. Another process of researching meteors is radiometric dating, to locate the time frame and history of the meteor and its composition.

Scientists devote an enormous amount of time to the study of meteors because they bear the history of the Solar System and the atmosphere going back to almost five million years. In 2021, a discovery was made at the University of Illinois Granger College of Engineering. Two meteors were found to ramp up the heat from room temperature to the temperature it reaches when it enters the atmosphere, and it was noticed that vaporized iron sulfide left voids making the materials more porous. Therefore this discovery was a path for understanding the weight of a meteor, its potential for damage, and the probability of it breaking apart under circumstances.

What are five facts about meteors?

As per the composition, it can change colors when they burn.

When they burn brighter than usual, they are called fireballs.

The word 'meteor ' was derived from a Greek word that meant 'atmospheric phenomena.'

It is said that over 500 meteors hit the surface of the Earth every year.

What are the three characteristics of meteors?

Meteors are dust and particles of space that burn up in the atmosphere.

Most meteors fall in the sea.

What are meteoroids made of?

Meteoroids are made up of silicon, oxygen, and heavier metals like nickel and silicon.

How big is a meteoroid?

Meteoroids are usually less than a feet or smaller.

Where are meteors located?

They all come from the Solar system with most of them emerging from in between Mars and Jupiter.

What is the difference between comets and meteors?

Comet is a cosmic substance made of ice, dust, rock, and gases that orbit the sun. Meteors are meteoroids that enter the atmosphere.

How many meteors hit earth?

Over 500 meteors hit the Earth every year.

Where do meteors burn up?

Meteors burn up in the mesosphere.

How big are meteors?

Meteor typically ranges in between the size of a pebble to a fist.