What Is A Group Of Turtles Called? Why Do Turtles Team Up? | Kidadl

What Is A Group Of Turtles Called? Why Do Turtles Team Up? 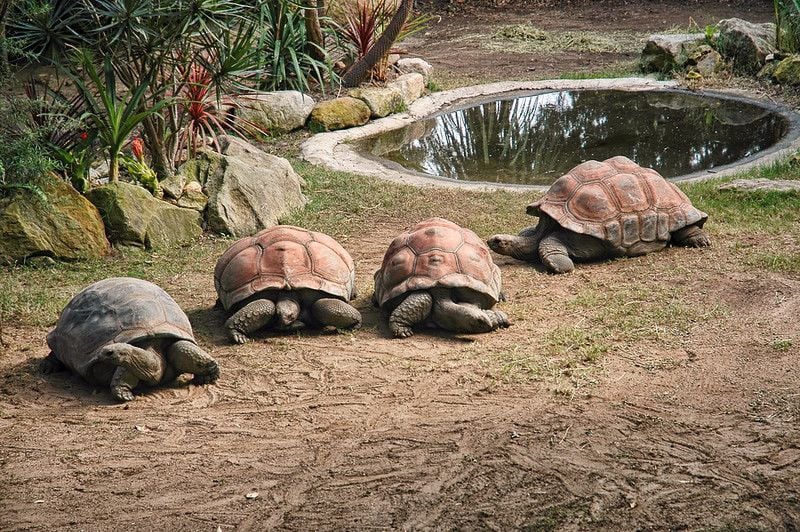 Interested in knowing the collective nouns for a group of sea turtles, the cute reptiles that you see on the beaches?

Turtles are the oldest species and have been around for more than 250 million years. They are often referred to as the oldest living creatures in the world. Since the very beginning, turtles have been studied a lot. Scientists have figured a lot of turtle facts out, but some things, even to this day, still remain a mystery.

Sea turtles are generally the species that live underwater in the ocean. There are at least 181 species of turtles that generally live in saltwater or in freshwater. Sea turtles can live in shallow water or deep water, which depends on where they find their food quickly. Although sea turtles live in the ocean, they hatch from eggs on land. They are adapted to the aquatic life, but their journey begins on the land.

You might have heard that a group of beavers is called a colony, a pack is the name given to a group of dogs, a group of fish is called a school, and a group of whales is often referred to as a pod, but what is a group of turtles called? Why do turtles team up?

If you have ever wondered why do turtles team up, this is the right place for you! This article is about the most common turtle group names and why turtles team-up. Read our other articles like how do turtles breathe, and how do turtles sleep, to learn other facts about turtles.

What is a turtles niche?

Sea turtles play a crucial role in the ecosystem. Eating lots of seagrass and algae is a turtle's niche! They help maintain the seagrass beds by consuming them and making them look good! They also improve the vegetation on sand dunes by laying eggs on them.

What do you call a group of sea turtles?

Among most other aquatic animals, a turtle is an intelligent and social animal. Although sometimes referred to as timid, turtles can be surprisingly social and team up with other turtles to accomplish a goal. Formed various groups called a bale of turtles, a dole of turtles, a nest of turtles.

What do you call a group of baby sea turtles?

A baby turtle is a cute little animal that we all love to see. Their journey from the beach to the sea is really an exciting one.

A group of turtles, baby turtles to be precise, is called a bale or a flotilla. A female turtle lays eggs on a nesting beach, and here is how the life cycle of a baby turtle begins. Six weeks to two months after the female lays eggs, a cute little hatchling finds its way in a slow and steady manner to the sea fighting all the predators, and learns to live its life at the beach by itself. At the time of hatching, this little 2 in (5 cm) hatchling may weigh around 1.5 lb (0.7 kg) and grow up to 3 ft (1 m), weighing around 300-350 lb (136-158.7 kg). An adult female and an adult male turtle of the same species are almost equal in size and weighs around 73-110 lb (33-50 kg) on average. Fun fact, the largest turtle species is the leatherback sea turtle.

What is the difference between a group of turtles and tortoises?

Turtles have webbed feet or flippers and a streamlined body. In contrast, a tortoise has round and stumpy feet. Occasionally, to bask in the warm sun, turtles often climb out of the water onto the rocks, whereas, to hide from the hot sun, a tortoise may dig burrows with its strong forelimbs and hide inside that burrow.

When talking about the shell, which both turtles and tortoises are known for, a sea turtle has a thinner and more water-dynamic shell. While on the other hand, a tortoise has a more round and dome-shaped shell.

What is the origin of the term 'bale of turtles'?

Did you know this interesting fact that turtles can breathe through their butts? Yes, there is a special kind of species in the turtle family, and it is called a butt-breather! Butt-breathers are species of turtles that can stay underwater for days and rarely come out to bask in the sun. They make this possible by breathing through their cloaca, which in layman's terms means a butt.

Why do turtles team up in the first place?

There are some animals or species that are solitary. Octopus, for example, is solitary and usually lives on its own. Hence, there isn't a widely accepted collective noun for a group of octopuses. On the other hand, turtles are often found living in large groups with hundreds of other turtles. Interestingly, they only come together when the sun goes down in order to protect themselves from predators.

People often wonder why turtles team-up. There are several reasons why turtles team-up. One is for protection. If they were to be attacked, it would be much easier to take on one turtle than many. It's also so they can all get to the same area. Maybe they're migrating to a different location! Turtles often team up when it's time to lay eggs, and the eggs are protected in a nest in a proper way by the turtles. This allows them to hatch and grow into turtles successfully!

Some turtles are sentry turtles looking for danger, some are rescue turtles who come to the aid of another in danger, and some are caretakers of the young turtles. When turtles team up, it's generally called a bale.