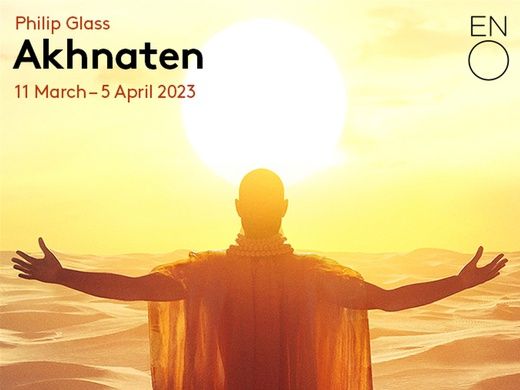 Book Your Tickets For The ENO's Akhnaten In London

The English National Opera (ENO) presents the Olivier Award-winning production of Philip Glass' 'Akhnaten', by Phelim McDermott, at the London Coliseum on St Martin's Lane. After previous successful bestselling runs at the London Coliseum, the ENO production is back for a limited run. The text of 'Akhnaten' draws on prayers, ancient hymns, and inscriptions, which make for a mesmerising work sung in Hebrew, Egyptian, and Akkadian. Transport to the ancient world, listing to music from Philip Glass and conducted by Karen Kamensek. The characteristic minimalistic voice of Philip Glass, with choreographed juggling and stylised movement, helps visualise the score's rhythm. Learn about Pharaoh Akhnaten, one of the most influential figures in the world. Book ENO 'Akhnaten' tickets now at the London Coliseum Theatre.

About The ENO's 'Akhnaten'

What is 'Akhnaten' about?

This Olivier award-winning production of 'Akhnaten' by Philip Glass is brought to you by Phelim McDermott and is presented by English National Opera (ENO) at the London Coliseum on St Martin's Lane. There have been several sold-out runs of the production in the past and will return in 2023. This opera is captivating in every sense and pulls the text from prayers and ancient hymns, including inscriptions. It is sung in the original languages of Hebrew, Akkadian, and Egyptian. Take a trip to the ancient world with Glass' score and the mood of the opera.

This is a story about Akhnaten, who was the first pharaoh to change from worshipping different gods to just worshipping the sun God, Aten. Akhnaten was an influential person in Ancient Egypt and also the father of Tutankhamun. Akhnaten wanted to create a monotheistic religion for the first time.

The title role is played by Anthony Roth Costanzo, while his wife, Nefertiti, is played by Chrystal E Williams. Queen Tye is played by Haegee Lee. Zachary James makes his return as the Scribe and Keel Watson is back as the character Aye.

What age is 'Akhnaten' suitable for?

Visitors of the ages five and over are allowed in the theatre.

The opera is sung in Egyptian, Hebrew, and Akkadian.

The duration is two hours and 55 minutes.

Who is the team behind 'Akhnaten'?

Karen Kamensek is the music conductor of the orchestra for the Phelim McDermott production. The set designer is Tom Pye, the costume designer is Kevin Pollard, and the lighting designer is Bruno Poet. Choreography is from Sean Gandini. Watch the mix of choreographed juggling and stylised movement with the minimalistic voice of Glass in this production. This production is from ENO, which is a collaboration with Improbable and with the co-producer, LA Opera.

Who is in the London cast of 'Akhnaten'?

Where is 'Akhnaten' being performed?

There are toilets located all over London Coliseum. Accessible gender-neutral toilets are found on the levels basement, stalls, dress circle, and balcony.

The theatre is accessible with lifts across the venue and wheelchair spaces in the dress circle, stalls, and stall boxes.

Some restaurants in the area are Notes, Nutshell, Fumo, and Chandos.