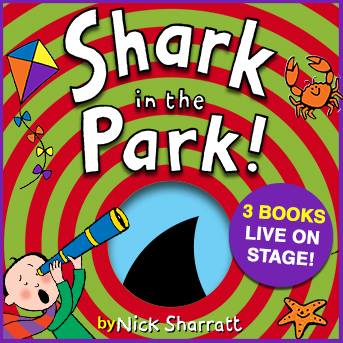 Shark In The Park In London

Book Your Tickets For The Shark In The Park In London

About Shark In The Park At Underbelly Festival

What is Shark In The Park about?

Presented by Nonsense Room productions, the story follows Timothy Pope and his beloved telescope as he keeps gazing outside. But, wait a minute, was there really a shark inside the premises of the park? Find out this mystery together from the creative team that was responsible for the brilliant productions of 'You Choose' and 'The Hairy Maclary Show'. All three of Nick Sharratt's books, 'Shark In The Dark', 'Shark In The Park', and 'Shark In The Park On A Windy Day', are here at Cavendish Square of London to light the stage on fire.

Follow Timothy Pope and his lovely telescope on this journey to find the shark in the park. Book your tickets for the show in the UK today.

What age is Shark In The Park suitable for?

The show is suitable for ages two to five years.

The duration of the show is an hour.

Who is in the London cast of Shark In The Park?

The cast of this show has not been announced yet.

Who is the team behind Shark In The Park?

The family musical is presented by Nonsense Room Productions and has the same creative team as 'You Choose' and 'The Hairy Maclary Show'.

No names in the creative team have been announced. The show has been adapted from the popular books by Nick Sharratt.

Where is Shark In The Park being performed?

How do I get to Underbelly Festival at Cavendish Square?

If you are travelling to London, take the A4201 road to reach the destination in the shortest possible time. You can also travel via Wardour Street to reach Cavendish Square.

The theatre is located in the centre of the Oxford Street district in Central London. Oxford Circus Underground is the nearest tube station. Bond Street tube station is also nearby.

Marylebone is the nearest train station.

You can also make your way to the theatre by bus as buses in London remain in service both day and night.

Q-Park Oxford Street is nearby and the theatre is a short walk.

Where are the toilet facilities at Underbelly Festival Cavendish Square?

There are a lot of toilet facilities in the venue. All-gender toilets, baby-changing facilities, and an accessible toilet are available.

Is the venue accessible?

Ramped access is available. The play is being performed in the park, so there might be some areas where assistance is required.

Get your tickets for the show today.