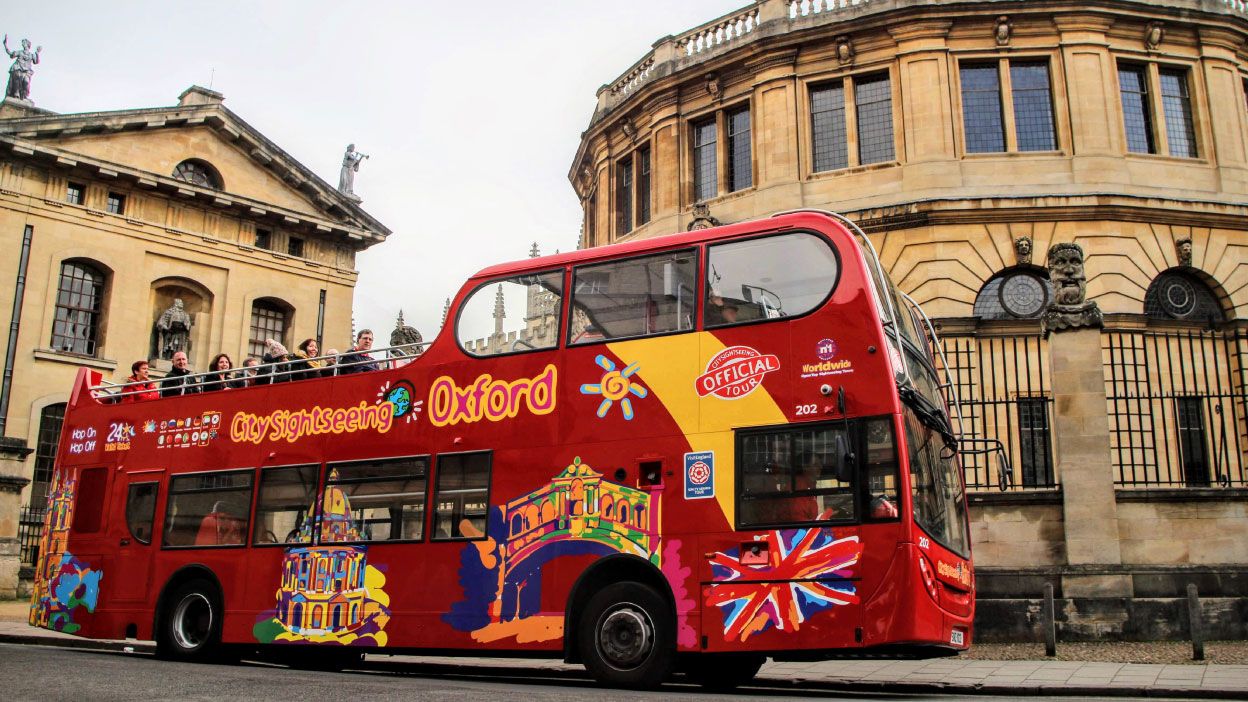 Oxford is wonderful and there is no better way to judge that than this hop-on-hop-off bus tour of the city. City Sightseeing Oxford hop-on-hop-off bus tour provides you with an option to get the ticket for 24 hours or 48 hours. You get unlimited access to the bus for the selected time where you can hop off the bus anytime, explore the attractions in that particular area, and then hop on the next bus. There are 20 stops all across the city and you can go for city sightseeing dropping at any one of them. With this tour, you also get an audio commentary in languages like English, Spanish, German, Italian, Japanese, French, Chinese, Polish, Russian, and Portuguese. Kids commentary is also available on this hop-on-hop-off bus tour of Oxford. Now, check out Christ Church College, Radcliffe Camera, Carfax Tower, Sheldonian Theatre, and more. Book Oxford bus tour tickets and enjoy a trip down the historical cultured city in the United Kingdom.

What are the locations and sights on the Oxford sightseeing bus Tour?

This 24-hour or 48-hour ticket gives you unlimited access to the hop-on-hop-off bus for as many hours as the ticket entitles. You also get an audio commentary on the bus that gives you facts and history about the city of dreaming spires. You have the flexibility to choose your own time, itinerary, and pace through the 20 stops all over the city of Oxford.

Now see the hidden treasure that is the beautiful city of Oxford filled with old-style colleges. You can even relax in the colleges' courtyards while on the tour.

There are 20 stops all across the city on this tour and you have an option to take the ticket for 24 hours or 48 hours. After you first activate the ticket, you get unlimited access to the bus and can hop off the vehicle anytime to explore an attraction. Once you are done, resume the journey by hopping on the next bus on the route, which moves periodically through the 20 bus stops.

Check out some of the astonishing landmarks in the city while on this tour. This hop-on-hop-off bus tour is the best way to explore Oxford from a new perspective as well as an affordable way.

What can I expect from an Oxford sightseeing bus tour?

With an audio guide of 10 languages and also kids' commentary, this tour will never let your mind rest as you will be given continuous facts about the history of this booming city of Oxford.

The roots of the university in Oxford date back to the 12th century and that is how old the city of Oxford is. It's full of history and you can take it all in when you take this tour. You will be taken to see the highlighted sights of the city and when you find something that intrigues you, just hop off the bus and take a closer look. World-known libraries, shopping streets, and museums, Oxford is full of them. Take in the audio guide and listen to all the unknown facts about these places.

You can take the City and University Tour and guided walking tour of Oxford which are optional. Both of these are 30 minutes long.

The tour is suitable for everyone. Children must stay along with adults at all times on this tour.

How long do the hop-on, hop-off buses take?

The tour takes around an hour to complete in a loop. You can make your own itinerary and take as much time as you need.

How long does the guided walking tour take?

The walking tour is 30 minutes long.

Where does the tour depart from?

How do I get to the departure points?

If you want to start the tour from the first bus stop (Oxford Railway Station), take the M40 road to reach the destination.

Many trains come to this stop, so it is easy to reach from any city in the United Kingdom.

When should I arrive at the departure points?

You can start the tour anytime you want to.

A car park is available at the railway station.

Where are the toilet facilities during the tour?

There are several public toilets along the way to these attractions.

What facilities are available on the tour?

You get the opportunity to hop-on and hop-off the buses and get on the next one. There is also open deck seating and audio guides available in 10 languages.

The tour is fully accessible.

Where can I eat during the tour?

Some popular restaurants in the area are The Porterhouse Grill & Rooms, The One Restaurant & Bar, Dosa Park, and Station Grill.