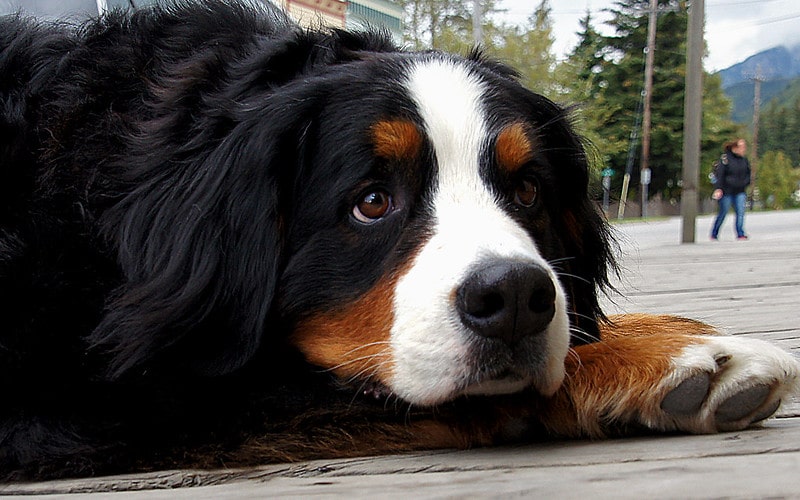 Choosing a dog name comes with a lot of responsibility.

Most dog owners try to use names that are easy to pronounce and don’t have too many syllables. At the end of the day, remember that your dog's name, represents not only the dog's but your personality as well (and you have to be proud to call it out across the dog park)!

Dogs come in various shapes and sizes. But big dogs have their own very special charm due to their kind natures and their soft cuddly bodies. So, how do we find names that are perfect for the family giant? Big dogs' names can do so much more than just showcase their super-size. It can show off your dog’s loving personality and their larger than life character too. Some people pick names for big dogs from their favorite film, TV or literary character. Some people go for human-like dog names like "Mike" or "Elena". Or perhaps, you own a big softie and want to use a name that gives off a “gentle giant” vibe such as “Hercules”, “Bear”, “Titan” or “Tank”.

Picking big dog names for big dogs is really enjoyable and it has given us the license to put on our creative hats. So without further ado, let us begin with our list of top 100 best big dog names. For ease of use we have classified this list into three sections: male, female and gender neutral big dog names. Enjoy!

For more dog naming ideas, take a look at these German dog names and these Basset Hound names.

Some names for big dogs in this list are pretty obviously about their size. But this list of male big dog names also includes a lot of unique big dog names which can speak volumes about your pet’s unique personality.

1. Arnold: Named after the ‘Terminator’ himself.

2. Atlas: The Greek Titan holding the heavens up.

3. Attila: Attila The Hun was a terrifying figure in ancient history.

4. Avenger: Who doesn’t love the Marvel superhero team as a pet name?

5. Baloo: After the friendly bear from Rudyard Kipling’s ‘The Jungle Book’.

6. Bear: Big dog names can be lovely too. This is truly the perfect name for a gentle giant.

7. Beowulf: Named after the hero who fights monsters in the old English poem.

8. Bluto: Popeye’s nemesis from the cartoon.

9. Boone: Named after Daniel Boone, the American pioneer and trailblazer.

10. Bruiser: This could be for a small pet with a big personality or a really cute and clumsy big dog.

14. Captain: An impressive name for a large dog.

15. Captain America: After the superhero from ‘The Avengers’ movie franchise.

18. Colossus: It literally means “huge”. Ideal for a pet of immense size.

19. Commander: A great name for a large dog who is always in control.

20. Diesel: Named after the bald hero of 'The Fast And The Furious’ franchise.

21. Dutch: This name itself sounds big and strong.

23. Goliath: The Giant from the Old Testament defeated by David.

24. Grendel: The monster from the English epic who was killed by Beowulf.

25. Hercules: The mythological hero famous for completing those legendary labors.

27. Hulk: The big green superhero from the Marvel series. Could be a good name for a fierce dog.

28. Iceburg: For a big dog with a lot of personality beneath their huge exterior.

29. Iron Man: For a dog with a sense of humor. Named after the Marvel superhero.

31. Kong: For a dog who is large but sensitive. Named after the ape in the movie 'King Kong'.

33. Lebowski: For a big dog who is as laid back as the character from ‘The Big Lebowski’.

34. Loki: For a mischievous and big dog named after the Norse God.

35. Mammoth: After the large and furry prehistoric creatures.

36. Marmaduke: The perfect name for a Great Dane (and for other dogs too).

37. Magnum/Magnus: A perfect name for an important and big dog.

38. Moby: A perfect name for a big white dog. Named after the legendary white whale from the Herman Melville’s book ‘Moby Dick’.

39. Moose: Perfect big dog name for your dog if it nearly is as big as a moose.

41. Rex: For the big and fierce dog much like a Tyrannosaurus Rex.

42. Rocky: Perfect name if your large dog is also a Boxer.

43. Simba: For the large dog who is a King by nature. Perfect for a Great Dane.

44. Stallone: After the actor and tough guy Sylvester Stallone.

45. Tank: For a dog who is really big and heavy and kind of rolls along as he walks.

46. Terminator: The big and tough machine from the future.

47. Thor: The Norse God of Thunder and also a member of 'The Avengers'.

48. Titan: A Titan can either mean the Greek mythical character or Saturn’s largest moon.

50. Wolf: A great name for a Husky, a Malamute or a German Shepherd.

Taking inspiration from the powerful and famous women throughout history we have looked for names with significance and meaning, while not conforming to the conventional big dog names you hear every day.

51. Amazon: After the tribe of legendary female warriors of Scythia.

52. Anastasia: Named after the mystifying and romantic Princess of Russia.

53. Athena: The Goddess of Wisdom, War, Arts and Commerce from ancient Greek mythology.

54. Audrey: A tribute to the iconic British actress of yesteryear, Audrey Hepburn.

55. Barda: The DC Comics super heroine Big Barda is the influence behind this name.

56. Boudicca: A women who fought the Romans in the first century by leading an army of 100,000 Britons.

57. Cleopatra: The Egyptian Princess known for her beauty and bravado.

60. Diana: A powerful name for a guard dog. Diana was the Roman Goddess of the Hunt.

61. Duchess: When you treat your dog like a princess, why not name her as one?

62. Eleanor: She was France’s first Queen.

63. Elizabeth: If you think your dog has a large personality of a Queen why not name her after one?

64. Emily: After one of America’s greatest poets. This name shows that big dog names can be classy too.

66. Estée: For the big dog owned by a cosmetics enthusiast.

69. Helga: After the character on the TV show ‘Vikings’.

70. Hermione: After the beloved female character from the 'Harry Potter' franchise.

72. Joan: After Joan of Arc, Patron Saint of France.

73. Khaleesi: After the fiery and famous female character from the show ‘Game Of Thrones’.

74. Madeline: The perfect name for your small but fearless girl.

75. Madonna: After the American pop star. One of the best big dog names for music lovers.

76. Magdalene: She was Christ’s most devoted follower.

78. Mirabai: A pretty name for your girl. She was a devotee of Hindu God Krishna.

79. Mrs. Robinson: The famous character from the movie ‘The Graduate’.

80. Mrs Darcy: The evergreen character from the movie ‘Pride And Prejudice’.

81. Nightingale: A beautiful name for a beautiful dog.

82. Oprah: After the world-famous TV host.

83. Pandora: The perfect name for the ever curious girl.

85. Queen: Obviously, because your dog rules.

87. Rosa: A tribute to Rosa Parks who was a Civil Rights activist.

88. Valkyrie: She chose who lived and died in battle in Norse Mythology.

89. Victoria: The Empress who presided over one of the largest kingdoms in history.

91. Brooklyn: Another name of city which suits a large dog as well.

92. Charlie: Could be a tribute to the great Charlie Chaplin.

94. Jerry: An ode to the legendary cartoon mouse. Big dog names are great for cartoon buffs.

95. Jessie: A cute name for a cute dog, this name shows that big dog names can be cute too.

96.  Jupiter: The largest of all planets.

99. Tokyo: After the capital city of Japan.

100. Willow: A beautiful name for a big  dog with brown fur.