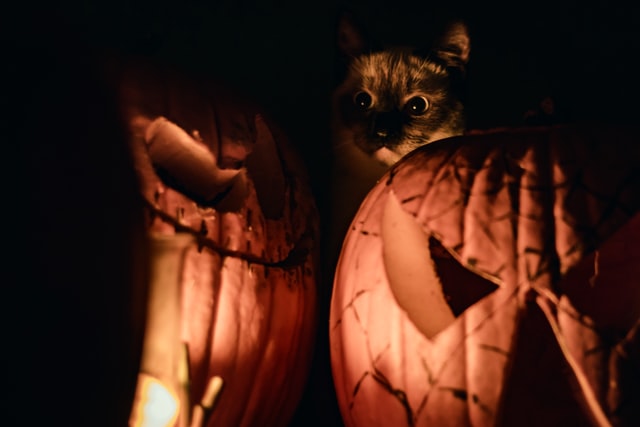 Halloween, also known as Allhalloween meaning "saint's evening", is a celebration where people dress up as spooky characters and go for trick-or-treating.

The tradition of Halloween, emerged with the ancient Celtic festival of Samhain,  people would light bonfires and wear costumes to chase away ghost. Cats are generally considered as familiars or pets of witches, or demonic possessions who help witches.

Legends mention that witches can shape-shift and turn into a black cat to get away from being caught.  Halloween is linked with witchcraft and so, the image of a black cat can also be associated with Halloween. Halloween activities include trick-or-treating, playing pranks, dressing up as a ghost and attending Halloween costume parties, apple bobbing, carving a pumpkin, visiting haunted attractions, lighting bonfires, divination games, telling scary ghost stories, as well as watching horror films.

Are you searching for whimsical Halloween names for your cats? Here are some good spooky Halloween cats names for your (black) kitten. For more cat names (Halloween aside), take a look at Grey Cat Names and Bengal Cat Names.

Names For Female Cats Inspired By Movies and TV Shows

Looking for spooky names for female black cats? Here are some Halloween girl cat names for your furry baby.

1. Asami (Japanese origin) meaning "morning beauty". From the Japanese horror movie 'Audition' and is great for a Halloween cat.

3. Carrie (German origin) a short form of Caroline. Inspired by the movie 'Carrie'.

4. Clarice (Greek origin) meaning "brilliant". From 'The Silence of the Lambs'.

5. Cruella (English origin) a pun of the word cruel. Taken from the movie '101 Dalmations', this is one of the classic Halloween cat names.

8. Miss Giddens (Celtic origin) meaning "dusky or dark". From the movie 'The Innocents'.

9. Morticia (American origin) meaning "undertaker, funeral director". Inspired by  'The Addams Family', another one of the classic Halloween cat names.

10. Ripley (English origin) meaning "from the strip field". From the movie 'Alien'.

Names For Male Cats Inspired By Movies and TV Shows

23. Count Orlok (German origin) Inspired by 'Nosferatu'. This certainly sounds like one of the dramatic Halloween cat names.

25. Damien (Greek origin) meaning "powerful man of the people". Associated with 'The Omen'.

26. Dr Génessier Associated with the horror film 'Eyes without a Face'.

30. Duc de Richleau (French origin) Name of the principal minister of Louis XIII. Inspired by 'The Devil Rides Out'.

35. Hannibal (Greek origin) meaning "Baal is gracious". Inspired by 'The Silence of the Lambs'. Definitely classed as one of the scary Halloween cat names.

39. Jigsaw (English origin) meaning "up and down motion". Associated with the movie 'Saw'.

42. Malachai (Biblical origin) meaning "messenger of God". Associated with 'Children of the Corn'.

43. Mrs Voorhees (Dutch origin) meaning "one who lives in front of Hess". Inspired by  'Friday the 13th'.

46. Pazuzu (Mesopotamian origin) meaning "king of the demons of the wind". Inspired from the series 'The Exorcist'. One of the more unique Halloween cat names.

47. Pinhead meaning "the head of a pin". Inspired from the film series 'Hellraiser'.

50. Schreck (German origin) meaning "to jump or to frighten". Inspired by  'Shadow Of The Vampire'.

51. Salem (Hebrew origin) meaning "peaceful, complete". Derived from  'Sabrina the Teenage Witch'. If you're looking for Halloween cat names, this is one to beat.

53. Weasley Inspired by the character of Ron Weasley from 'Harry Potter' series.

55. Zuul Inspired by the movie 'Ghostbusters'.

Whether you are looking for Halloween Calico Cat names or names for black cats, we have covered you all. Here are some classic creepy cat names inspired by gothic literature.

56. Attila (M) (German origin) meaning "father". Inspired by Chief of the Huns -the Scourge of God from 'Inferno'.

57. Cerberus (M)(Greek origin) meaning "spotted". The three-headed hound that guards one of the gates of Hell in 'Inferno'.

60. Euryale (F) (Greek origin) meaning "far roaming". One of the Gorgons, sister to Medusa and Stheno in 'Inferno'.

65. Malacoda (F) meaning "evil tail".  One of the Malebranche in the gothic poem 'Inferno'.

Halloween is simply incomplete without Trick or Treating for candies. Here are some cute Halloween cat names inspired by our love for candies.

75. Butterscotch (Scottish origin) referring to a hard candy made from butter, brown sugar, syrup and vanilla.

80. Jolly Rancher meaning "one who ranches".

98. Scarecrow (M) (Egyptian origin) meaning "device of straw and cloth in grotesque resemblance of a man, set up in a grain field or garden to frighten crows"

103. Jack-o-Lantern (M) (Irish origin) meaning "phenomenon of a strange light flickering over peat bogs".  It is a carved pumpkin.

Kidadl has lots of great names articles to inspire you. If you like our suggestions for Halloween Cat Names then why not take a look at Disney Cat Names, or for something different take a look at Unicorn Names.