100+ Wolf Pack Names To Inspire You 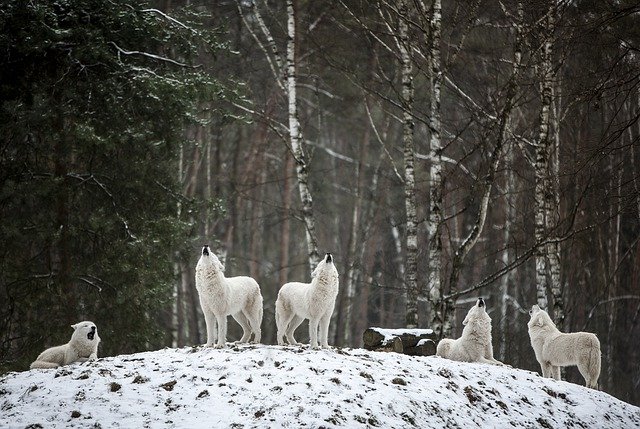 A group of wolves that typically live and hunt together is called a wolf pack.

A wolf pack usually consists of six to ten wolves living and hunting together. Wolves travel in packs (pack is the official name for a group of wolves) over large distances, normally 12 miles per day with the Alpha being the name of the wolf who leads the pack.

A Luna in a wolf pack is the mate of the Alpha, she is a fae (which is the name for a female wolf). Wolf packs operate according to a well established hierarchy of wolves, with the Alphas leading the pack during a hunt, eating first after a kill, and even mating to produce litters. The wolf ranks that follow are the Betas and the Delta, with Omegas being the lowest ranks in a wolf pack.

We've put together a list of wolf pack names and meanings that you'll surely love. For more names inspiration, check out our articles about the best last names meaning wolf and the best wolf names from around the world for your puppy (featuring some cute wolf names such as Duke, Peta and Echo).

Here's a list of nature inspired names for pack wolves.

1. Ash Band: Referring to the ash tree and nature's abundance.

6. Lotus Pack: One of the cute names for a wolf pack formation.

7. Moon Howlers: Apt for those who howl at night time.

8. Oceans Howl Pack: Combines the serenity of the ocean with the howls of wolves.

11. Pack Moon Stone: For a pack that is tough like a stone and is active in the night, this is a great name for a wolf pack.

12. Starry Banes: This can mean "those who disturb at night time when the stars are out" (with their howls in this case).

13. Storm Riders Pack: For a pack that's ready to take on challenges.

15. Sunset Banes: An aesthetic name for a wolf pack.

Any of these wolf pack names would be good choices for your wolf pack.

16. Aberrant Canines: For canines that just don't comply with the regular standards.

18. Aurora Clan: Representing the wonders of the Northern Lights.

22. Bloodvenom Group: Inspired by the wild nature of hunting wolves.

23. Canine Pack: A simple name for this canine species.

24. Crimson Fangs Wolf Pack: For the hunters in any wolf pack.

25. Cruelcrest Hounds: Denotes the violent nature of some wolves.

26. Delta Hunters: Alludes to the third rank in the hierarchy of wolves.

29. Frozen Prowlers: Because they can prowl even on frozen lands.

30. Hallowed Manes: A cool name for a wolf pack.

32. Lunar Pack: A reference to the moon.

34. Mystic Pride: Alluding to the mystical nature of wolves.

36. Pack Forsaken: This name has the "lone wolf" feel to it.

37. Pack Silver Heart: A good name for a wolf pack.

38. Sabrefur Prowlers: Brings to mind their sharp teeth and claws.

39. Sombermane Band: Alluding to a wolf with dark fur.

40. Sundown Claws: A good name for a wolf pack.

41. Volatile Hounds: A wild name for a wolf pack.

44. Alpha Walkers: For a group with great powerful leaders.

46. Astral Association: Relating to the stars.

50. Dream Catchers: For wolves who travel in their pack at night.

53. Freedom Runners Pack: For those who can run free.

54. Golden Summit Pack: A good name for a wolf pack.

55. Grayhide Banes: A tough name for a wolf pack.

57. Lichen Travelers: A good name for a wolf pack.

59. Onyx Tails: For preciou wolves, just like the gemstone.

61. Rabid Shadows: Apt for the wild nature of wolves.

63. Rebels' Reign: A strong and cool name for a wolf pack.

64. Sanguine Keepers: This can mean "optimistic".

65. Scarred Pride: A good name for a wolf pack.

67. Skeletal Shadows: A good name for a wolf pack.

68. Spirit Walkers: A spooky name for a wolf pack.

72. Thunder Banes: A tough name for a powerful wolf pack.

Funny Names For A Pack Of Wolves

Choosing a funny name is a good option for your wolf pack.

73. Angel Banes: Pairing the good with the bad.

75. Careless Canines: For wolves that aren't as prepared for life's hurdles as they should be.

77. Frostfang Nightstalkers: You don't want to end up being stalked by them ever.

78. Goldfang Pack: A play on the name, Wolfgang Puck.

82. Lone Group: If they're in a pack, they aren't really lone wolves, are they?

83. Morning Warriors: For the early risers.

Whether it's 'Twilight' wolf pack names or other names for your pack of wolves, you'll find something you like on this list.

89. Barry Pack: A werewolf group from among the seven original bloodlines in 'The Vampire Diaries'.

90. BasRoq Pack: A werewolf group from among the seven original bloodlines in 'The Vampire Diaries'.

92. Crescent Wolf Pack: Comprises a group of evolved werewolves from New Orleans and The Bayou in 'The Vampire Diaries'.

93. Deep Water Pack: A werewolf group from among the seven original bloodlines in 'The Vampire Diaries'.

94. Jules' Pack: A werewolf pack from Miami, Florida in 'The Vampire Diaries'.

95. Klaus' Pack: A hybrid pack bound to Niklaus Mikaelson in 'The Vampire Diaries'.

96. North East Atlantic Pack: The werewolf descendant pack of Ansel, coming from the North Atlantic in 'The Vampire Diaries'.

97. Paige's Pack: A werewolf pack living in Tennessee in 'The Vampire Diaries'.

98. Paxon Pack: A werewolf group from among the seven original bloodlines in 'The Vampire Diaries'.

99. Poldark Pack: A werewolf group from among the seven original bloodlines in 'The Vampire Diaries'.

100. Tyler's Pack: A group of 13 Klaus pack defected hybrids in 'The Vampire Diaries'.

Kidadl has lots of great names articles to inspire you. If you liked our suggestions for wolf pack names, then why not take a look at something different like these pirate crew names to inspire you or this list of the best clever guild names.