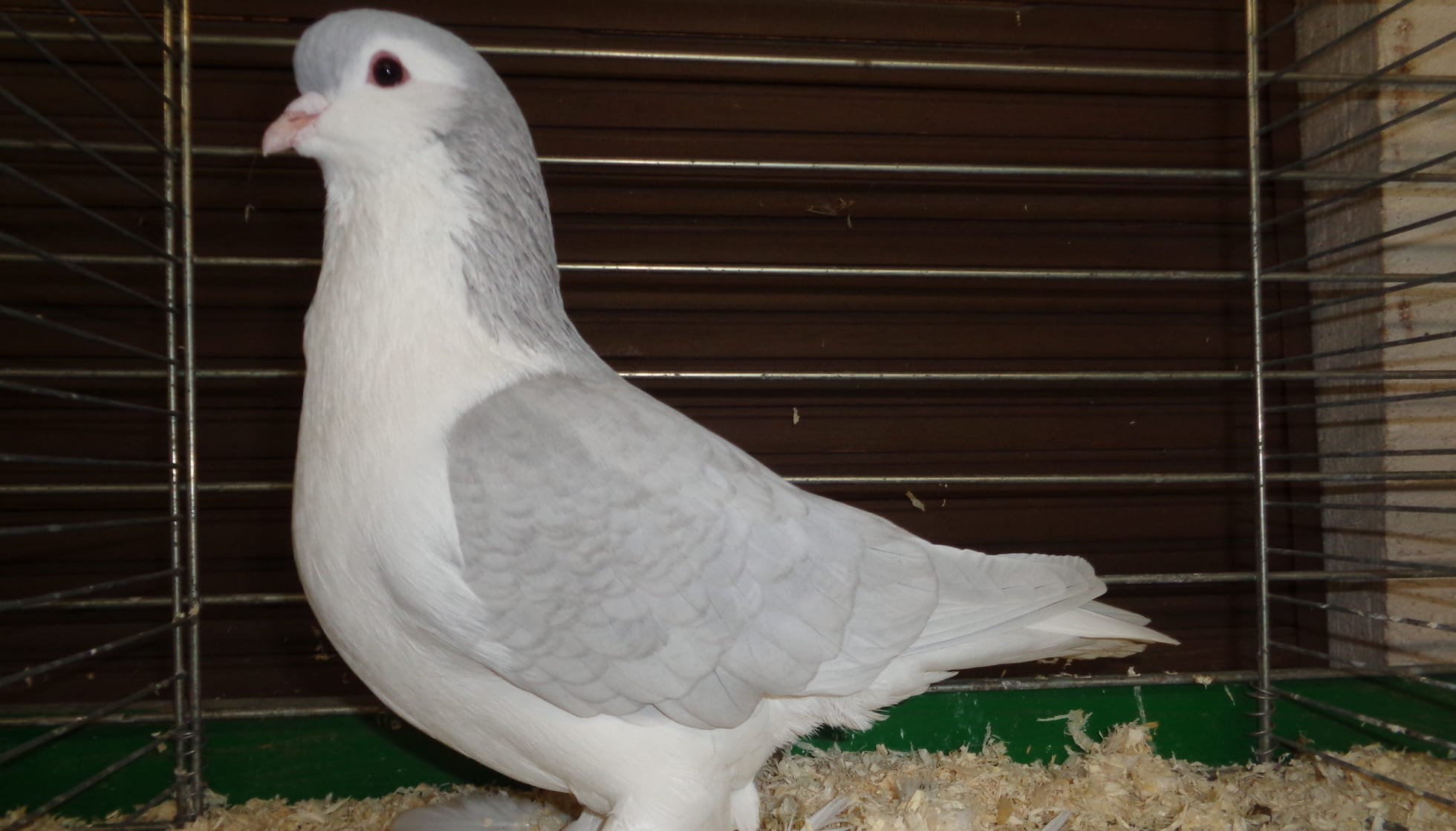 A Lahore pigeon is a fancy breed that is raised mainly to be kept as a domestic pet. It is also a popular show bird. This breed is commonly found in Pakistan and Iran. The Lahore pigeon was introduced to Germany in 1880, becoming popular worldwide around 1960.

Lahore pigeon is a descendent breed of rock dove or rock pigeon and therefore there are a lot of similarities between these two birds. Lahore pigeon is a common pet due to its gentle nature and the attractive colors they are available in. It has a large size in contrast to other pigeon breeds but does not have a long body.

The Lahore pigeon is considered to be an extremely gorgeous breed. This pigeon's body is mostly white in color in the front of its chest and face. The area beginning from the beak and wattle at the back of a Lahore pigeon gradually has secondary colors such as blue-bar, red, blue, black, and brown. The secondary color forms an arc around the eyes and spreads across the back and wings. The plumage on its rump and tail is white in color with heavily feathered feet and legs. This breed has a broad chest along with a densely feathered neck. The beak is broad and stout, with a blunt tip, and the cheeks are chubby. Keep reading for more interesting information about this bird.

For more relatable content, check out these pitta bird facts and pigeon guillemot facts for kids.

What type of animal is a Lahore pigeon?

The Lahore pigeon is a type of bird that belongs to the Columbidae family.

What class of animal does a Lahore pigeon belong to?

Lahore pigeons belong to the class of Aves of the Animalia kingdom.

How many Lahore pigeons are there in the world?

The exact population of Lahore pigeons has not been estimated. However, there are almost 344 species of pigeons present in the world.

Where does a Lahore pigeon live?

This pigeon breed is endemic to Pakistan's Lahore, where it has been bred for many years. Furthermore, they had been later introduced in Germany in 1880 but the most beautiful and colorful breed of Lahore pigeons are currently found in parts of Iran. These pigeons are found all over the globe now as domesticated and show birds.

What is a Lahore pigeon's habitat?

Lahore pigeons are popular domestic pets and they are endemic to their native area of Iran and Lahore. They are not wild animals and therefore thrive well under proper care. This pigeon breed does not migrate as they are mostly tamed at home.

Who do Lahore pigeons live with?

Lahore pigeons, like other Columbidae pigeon breeds, can be both solitary and gregarious. They are gentle birds that can live alone as well as in groups.

How long does a Lahore pigeon live?

It is reasonable to assume that this pigeon breed will live for around six years since rock pigeons have a similar lifespan.

Lahore pigeons, just like rock pigeons, are monogamous in nature. This is especially because this pigeon breed is bred in captivity. The male struts in a circle around the female before copulation, and uses bowing as a gesture of mating call. The male pigeon also blows up his chest and stretches his tail in addition to strutting. Following copulation, the female pigeon lays one to three eggs and incubates them with the male pigeon for 16-19 days. The chicks are taken care of by both the male and female pigeons.

Not much information has been found about the conservation status of Lahore pigeons. However, their biological ancestor Rock pigeons are considered to be of Least Concern by International Union for Conservation of Nature (IUCN) Red List.

Lahore pigeon is a large fancy breed of pigeon (like the German nun pigeon) that is widely kept as a common domestic pet because of its beautiful plumage. This breed has a pretty impressive size in comparison to other pigeon breeds.

This bird has a body with a base color which is typically white in the front of its chest and face while the area beginning from the beak and wattle in the back gradually takes a different color. This secondary color spreads across the back and wings, forming an arc around the eyes. The rump and tail of a Lahore pigeon has white plumage. Furthermore, it has a wide chest along with a densely feathered neck. The beak is broad and stout, with a blunt tip, while the cheeks are plump. This bird has highly feathered feet and legs. The legs look like they are covered in white stockings. The body of a Lahore pigeon is around 10.5 in (27 cm) tall and 11.5 in (29 cm) long. It has a broad chest that extends around 5.5 in (14 cm).

The variety of plumage colors available, such as blue-bar, red, blue, black, and brown, is one of the key reasons for the popularity of the Lahore pigeon. Since this is a popular show bird, the quality of the head, neck and wing markings receives the most attention.

Lahore pigeon, just like any other pigeon breed (example, Nicobar pigeon), is extremely cute in nature due to its soft coos and adorable gestures. They cuddle with their partners and also give them sweet pecks on their head, neck, and wing which look very adorable. A Lahore pigeon comes in various colors which makes them a beautiful pet.

A Lahore pigeon, like all other pigeons, communicates with other pigeons through soft coos as well as whistles with the help of their wings. Before copulation, the male struts in a circle around the female with a puffed-up chest and a stretched tail and uses bowing as a mating ritual. Additionally, when it feels threatened, it tends to raise its wing and stretch its tail to scare off the predator.

How big is a Lahore pigeon?

How fast can a Lahore pigeon fly?

Lahore pigeon is able to fly but there is not much information about the speed of this bird. However, other birds from the family of Columbidae have a record of flying at an average speed of 77.6 mph (124.8 kph) with a maximum speed of 92.5 mph (148.8 kph).

How much does a Lahore pigeon weigh?

What would you call a baby Lahore pigeon?

Baby Lahore pigeons, just like any other pigeon breed, are referred to as squabs.

The diet of a Lahore pigeon mainly consists of various types of grain including corn, wheat, barley, millet, etc. These grains are extremely rich in carbohydrates and vitamins and keep the breed healthy. It also sometimes feeds on berries.

No, the Lahore pigeon is not known to pose any danger to humans. In fact, they are one of the friendliest pigeon breeds. When raised as pets, they are calm and docile. However, if you come across a Lahore pigeon in the wild, be aware that they may be hostile!

Yes, Lahore pigeons are bred to be popular and fancy pets. They are beautiful, gentle, and readily tamed at home due to their submissive nature. These birds, on the other hand, can be extremely shy and take a long time to warm up to their owners. If not given sufficient care and affection, this bird might become a bit aggressive. Also, it is very important to let a Lahore pigeon fly in the open regularly so that they remain healthy. A lot of people want this pigeon as their pet due to its various color options.

Apart from being a show bird, another reason why this bird is raised is due to its delicious meat which is still relished by many Iranians. This is mostly because this bird is easy to maintain and therefore its meat is quite affordable.

A Lahore pigeon can suffer from an infectious respiratory disease caused by viruses, bacteria, mites, or fungi. This makes it difficult for them to breathe and fly, making them less active. This might be a concern because the Lahore pigeon is a popular show bird. These types of diseases can be fatal for them too.

Just like any other pigeon breed, the Lahore pigeon is also quite soft and vulnerable to hold. There is a trick to pick up a pigeon safely. You should hold it with your dominant hand by keeping it flat with the palm facing upwards. After that, take up your pigeon carefully and slip your hand underneath it.

How smart is a pigeon?

Pigeons are exceptionally popular for being one of the most intelligent birds on the planet. They have impressive skills in identifying all 26 letters of the English alphabet. They are also skilled navigators, relying on both the planet's magnetic field and the location of the sun to search for their way! However, the most intelligent bird on the planet is the African grey parrot who can decipher the meanings behind words said to them.

The rarest pigeon breed is known as the pink pigeon that resides in Mauritius. Despite the fact that this breed nearly became extinct in 1990, they have managed to live but are still fairly unusual to see.

A few other rare pigeons are the Nicobar pigeon, the African green pigeon, Spinifex pigeon, and Victoria crowned pigeon.

Here at Kidadl, we have carefully created lots of interesting family-friendly animal facts for everyone to discover! Learn more about some other birds from our pink cockatoo facts and mockingbird facts pages.

You can even occupy yourself at home by coloring in one of our free printable lahore pigeon coloring pages.