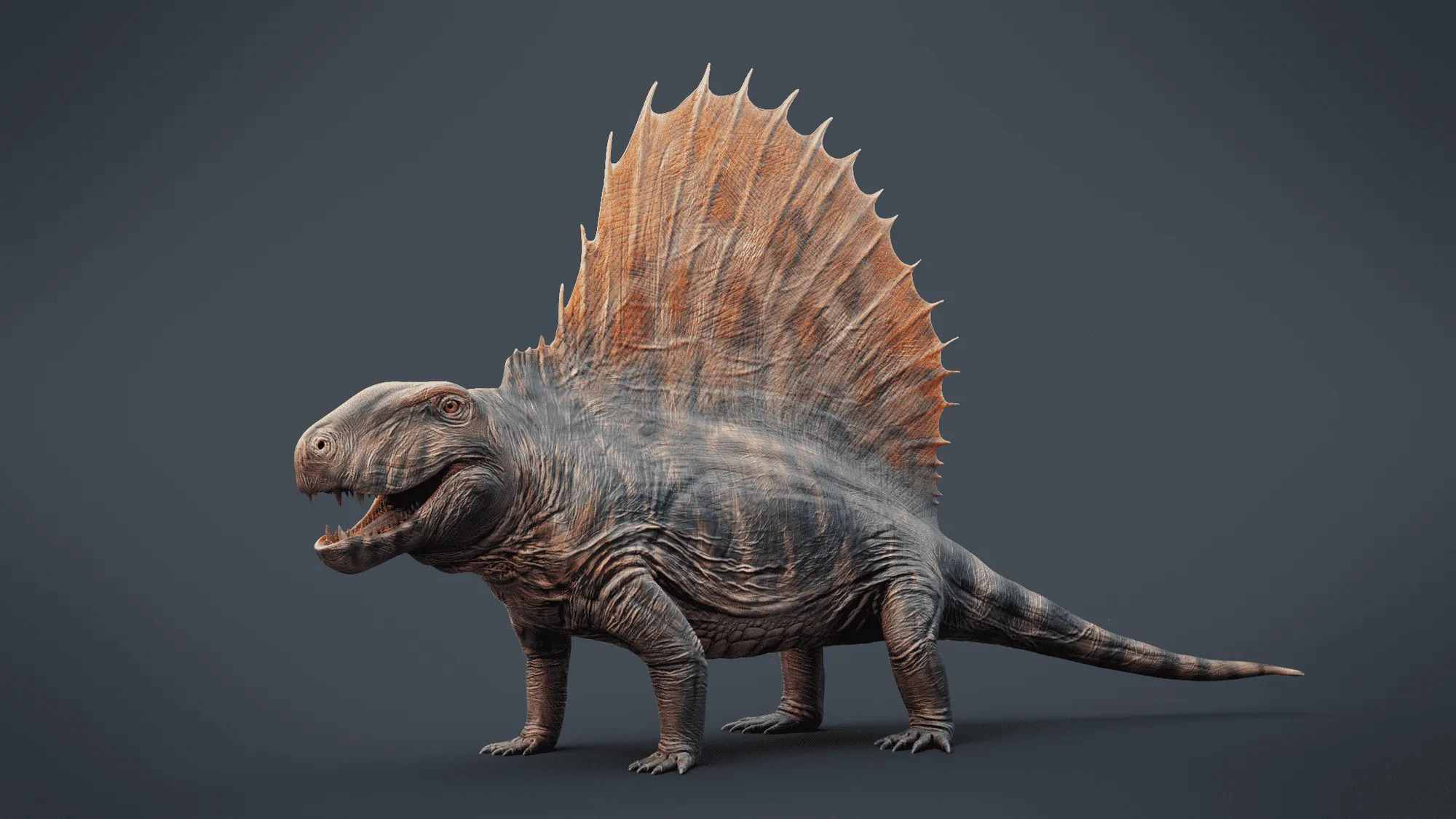 Would you like to read about a prehistoric animal? Not convinced? Alright, how about a pre-historic animal that used to live long before any dinosaur even existed? We know you're invested now, read on to find out more about this interesting animal including the name of the museum where its specimen is on display!

The dimetrodon is an extinct genus of the Synapsid class that used to live during the early Permian period about 272 to 295 million years ago. It belongs to the Sphenacodontidae group. Several fossils belonging to this animal were discovered in south western United States including geological deposits from Texas and Oklahoma. The most recent fossils were found in Germany. The Dimetrodon is recognized by its sail, which was used to maintain its body temperature (by absorbing and releasing heat) and provide stability to its spine. It is said that these animals absorbed heat from the sun all day long and released the stored heat slowly during night time to keep its body warm. However, this is not necessarily fact as some recent theories suggest that the sail did not help regulate the animal's body temperature. Smaller dimetrodon species had large sails that were known for their ecological roles. The Dimetrodon was described by Edward Drinker Cope in 1878, and its name means 'two measures of teeth'. Around 20 species of Dimetrodon have been described so far.

Learn about some other pre-historic animals on our Palaeosaurus facts and Ornithosuchus facts pages.

Was the Dimetrodon a dinosaur?

No, it is often mistaken for a dinosaur as this animal somewhat resembled a dinosaur, but it is a type of reptile known as Synapsid. In fact, it became extinct millions of years before the first dinosaur appearance in the Triassic period.

How do you pronounce 'Dimetrodon'?

The word Dimetrodon is pronounced as 'di-me-tro-don' and it was named by Edward Drinker Cope.

What type of prehistoric animal was a Dimetrodon?

The Dimetrodon is a member of the animal group known as Synapsids, which includes several other present-day mammals and their extinct relatives. The Dimetrodon is closely related to mammals and not so much to any dinosaur or present-day reptiles. Edward Cope described the genus in his 1878 paper, he called it a 'sail-backed Synapsid', and compared it to a modern basilisk lizard's crest, despite mentioning that its sail was a fin. Later, during the early 1900s, Dimetrodon was classified as a reptile by several paleontologists following Linnaean taxonomy. It was then described as a 'mammal-like reptile' as they believed that mammals evolved from them (a reptile-to-mammal transition). It is closely related to mammals and not so much to present-day reptiles, however, they are not considered a direct ancestor of the class of mammals. The non-mammalian synapsids group (mammal-like reptiles) forms a separate clade (an evolutionary group) which includes Dimetrodon and other mammals called Synapsida. On the other hand, reptiles, birds, and dinosaurs are placed in Sauropsida. The Edaphosaurus is considered a distant relative of the Dimetrodon because a similar sail evolved independently among them.

In which geological period did the Dimetrodon live?

The Dimetrodon lived from about 286 to 270 million years ago, during the Late Carboniferous and Early Permian Period.

When did the Dimetrodon become extinct?

Dimetrodon went extinct in the huge Permian extinction event which was about 245 million years ago and paved the way for the Mesozoic period.

Where did a Dimetrodon live?

Fossil remains of the Dimetrodon were discovered in North America and Germany, indicating that it lived in the supercontinent Euramerica. Almost every material (fossils) attributed to the Dimetrodon found in the United States came from the Pease River Group, the Clear Fork, and the Wichita, in Texas and Oklahoma. The Red Beds of Texas, in particular, had a great diversity of Tetrapod (four-limbed vertebrates) fossil remains. Besides Dimetrodon, remains of Eryops, Diplocaulus, the Synapsids Ophiacodon, and Edaphosaurus from the Permian era were also discovered in the same regions. There is no information to support whether they were endemic to a certain location or not.

What was a Dimetrodon's habitat?

A study of their fossil remains indicated that these animals could adapt to a variety of habitats, although the climate they lived in is not fully certain.

Who did a Dimetrodon live with?

Paleontologists believe that they lived in solitude and occasionally in pairs.

How long did a Dimetrodon live?

The life span of this animal is unknown.

The reproductive process of the Dimetrodon is considered to have been the same as that common to reptiles such as the crocodilians of the present day. This means they were most likely oviparous and may have laid large clutches of eggs in self-heating nests. However, this theory has not yet been confirmed.

The Dimetrodon was a quadrupedal (meaning walked on four legs) sail-backed synapsid, with a large sail-like flap that grew out of a bone present on its back. Fossils revealed that it had a tall, and rounded skull, long, bony spines on the sail, and large teeth of various sizes along its jaws. There are larger and smaller species of Dimetrodon and the larger ones are considered as the largest predators present in the early Permian period. The Dimetrodon had a large opening on each side of its skull, which is absent among mammals, and thus makes it easy to identify this species from other mammals and Sauropsids. Ridges seen inside the nasal cavity and at the back of its lower jaw have been described by scientists as an 'evolutionary progression from being land-dwelling vertebrates to mammals'. The skull of Dimetrodon is compressed laterally and quite tall.

How many bones did a Dimetrodon have?

The exact number of bones is unknown. Fossil remains revealed that most of the large neural spine sail is found on its back and is formed by elongated spines that extend from the vertebrae. This is one of the most significant features of the Dimetrodon.

Communication between these strange animals that roamed the Earth 270 to 286 million years ago is still a mystery. Many scientists over the past decades have come up with several theories that suggest possible ways these animals communicated. Some put forth the theory of vocalizations and that they engaged in dialogue by producing calls, cracking sounds, body movements, and symbolic love calls during the mating season.

How big was a Dimetrodon?

They were similar in size to the quadrupedal dinosaurs that evolved millions of years later.

How fast could a Dimetrodon move?

The speed rate of this pre-historic animal is unknown.

How much did a Dimetrodon weigh?

This species does not have gender-specific names for its male and female members, they are simply denoted as males and females.

What would you call a baby Dimetrodon?

Since some theories suggest they laid eggs, a young baby Dimetrodon can be referred to as a hatchling.

Paleontologists suggest that they fed mainly on aquatic animals, and used their sail as a camouflage to hide among reeds while waiting on their prey. Some suggest the Dimetrodon used the sail on its back like an actual boat sail so it could chase after its prey in the water. Other paleontologists have theorized that it was simply used to intimidate other animals.

They were territorial and aggressive towards any invaders or competition.

The D. incisivus skeleton is safely housed at the University of Michigan Museum of Natural History.

How many teeth does a Dimetrodon have?

Its name means two measures and this is a reference made to its teeth. It had a large skull with two separate sizes of teeth, sharp canine teeth, and shearing teeth, of several sizes similar to the teeth of predatory a dinosaur.

What do you mean by Dimetrodon?

Here at Kidadl, we have carefully created lots of interesting family-friendly prehistoric animal facts for everyone to discover! Learn more about some other creatures on our Coryphodon facts and Toxodon facts pages.

You can even occupy yourself at home by coloring in one of our free printable Dimetrodon coloring pages.

The first image is by Max Bellomio.