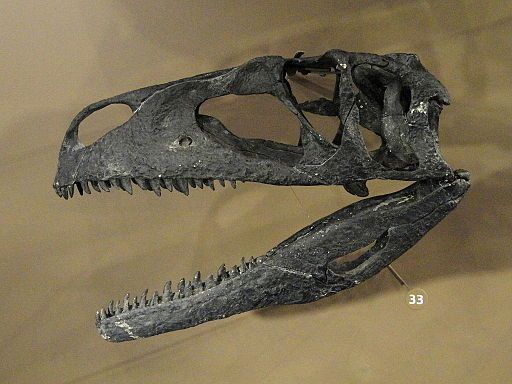 Tanycolagreus existed 157.6 million years ago. The fossils were found in the arid regions of North America so it can be said they belonged to this region. The fossil holotype TPII 2000-09-29 was donated to science by somebody unknown. It is kept in the North American Museum for Ancient Life in Utah. The earliest fossil consisted of the backside of the elongated head. Scientists say that the fossils were found in the Morrison Formation.

Morrison Formation is a place in North America that contains segments of upper Jurassic sedimentary rocks. Most of the fertile dinosaur fossils are found here. It took quite some time for the scientist to find out about this theropod. At first, they were confused and for a long time, the fossil was thought to be a part of Coelurus. After some time, more and more irregularities were found between the two fossils, and finally, in 2001, this species of theropods were given a name by a team of scientist led by Kennedy Carpenter. Further information about this dinosaur, like its length and weight, was also deduced.

Small dinosaurs and other small animals.

A long rectangular head along with short and light legs.

In dry and arid regions

Utah and Wyoming in North America

How do you pronounce 'Tanycolagreus'?

Tanycolagreus can be pronounced as tany-co-la-greus. The holotype was named almost after 5-6 years after its discovery as it was first thought to be a segment of a different fossil found in the Morrison Formation. It was named by Kennedy Carpenter.

What type of dinosaur was a tanycolagreus?

These types of dinosaurs are called theropods. They are quite different from the other types of species. They can be classified as a genus that consists of three toes and the bones of therapod are quite hollow and the specialty of this type is their legs.

In which geological period did the Tanycolagreus roam the earth?

This theropod roamed the Earth during the Tithonian age. This is the last stage of the uppermost upper Jurassic.

When did the Tanycolagreus become extinct?

These species of dinosaurs became extinct four million years ago.

Where did a Tanycolagreus live?

The theropod lived on land, we can say so because the holotype was found on land. They were found in conifers forests as well as grasslands

What was a Tanycolagreus's habitat?

They lived in the terrestrial habitat. Since the fossils were found in the Morrison formation, we can say that the Topwilsoni lived on the banks of many rivers. So their habitat included animals such as salamander, crayfish, turtles, and other dinosaurs. Some places had Savanah while others had conifer forests.

Who did a Tanycolagreus live with?

They didn't live in large packs, but in a pack of two or three as possible.

How long did a Tanycolagreus live?

The exact span of time is unknown but since it used to be a carnivorous animal, it could live up to 30 years.

Since they belong to the reptile kingdom, they used to lay eggs. At a time they were capable of laying four to five eggs.

After the discovery of the holotype, many similar skeletons were found in the Wyoming area near the Morrison formation. After such a massive discovery, Carpenter formed the basic outlook of the being. An adult Topwilsoni is a mid-sized theropod from the upper Jurassic. They had a long and elongated head followed by a long and tapered body with short hind limbs. They were around 10.8-13.1 ft (3.3-4 m) in length and their head used to be quite big in length and heavy, as well. The heaviest part of an adult Topwilsoni is the top.

How many bones did a Tanycolagreus have?

The exact number of bones is unknown but the bones of this Jurassic carnivore were designed in such a way that locomotion becomes their greatest strength. Skeletons that were found in Wyoming show that the theropod from the upper had strong limbs. Some had strong forelimbs, while others had strong hinds. As we all know this Jurassic carnivore belonged to the latter. Their hollow bones allowed them to have a light body. Altogether this led to its massive speed

Due to the unavailability of the internet and emails, it is likely the carnivore communicated through made-up sounds, hoots, and hollers.

How big was a Tanycolagreus?

According to Carpenter, the Tanycolagreus was half the size of a human. But in length, they were almost as big as two people lying in a straight line. The genus is thus called a mid-sized carnivorous theropod from the upper Jurassic.

How fast could a Tanycolagreus move?

After studying the skeletons of the Morrison Formation near Wyoming, it was clear that this Jurassic was an expert in locomotion. Tanycolagreus was one of the fastest moving therapods of that time but the exact speed of their locomotion is still in the dark. According to some, this animal was almost as fast as the modern-day cheetah.

How much did a Tanycolagreus weigh?

From the skeleton and fossils found in Wyoming, Carpenter claimed that they were not huge but rather small. According to him, an adult weighed about 260 lb (120 kg). According to their length of 4 m (13 ft), these are quite light animals.

Both the male and female names of the name same from the holotype found in Wyoming, the scientist figured out that there is no major difference between the two sexes, hence they decided on keeping the same name.

What would you call a baby Tanycolagreus?

There is not much information given about this particular topic. The only thing still known is that the babies looked quite similar to the adults but were way smaller in length.

As mentioned earlier they were carnivorous animals that lived in the savannah of modern-day Wyoming, so their diet consisted of a lot of river animals such as turtles, crayfish, clams, and other smaller dinosaurs such as monotremes.

These carnivores were the most aggressive among the theropods. Their quick ability to hunt is what is so aggressive. According to Carpenter, this is one of the most dangerous theropods from the upper Jurassic whose remains have been found in the Morrison Formation.

More than three different skeleton specimens were found in the Morrison Formation which lead to confusion at first.

The herbivore Jurassic animals lived way longer than this carnivore.

Even though the single premaxillary tooth has badly been damaged, it can still show the asymmetrical cross-section that is quite common in such theropods many other cheek teeth were also preserved but unfortunately these teeth are so old and desecrated that it is unable to give any detail.

Is Tanycolagreus a raptor?

Even though it belongs to the upper Jurassic, these dinosaurs are not basal tyrannosaurs, so they can also be considered as stem or small raptors.

What does Tanycolagreus mean?