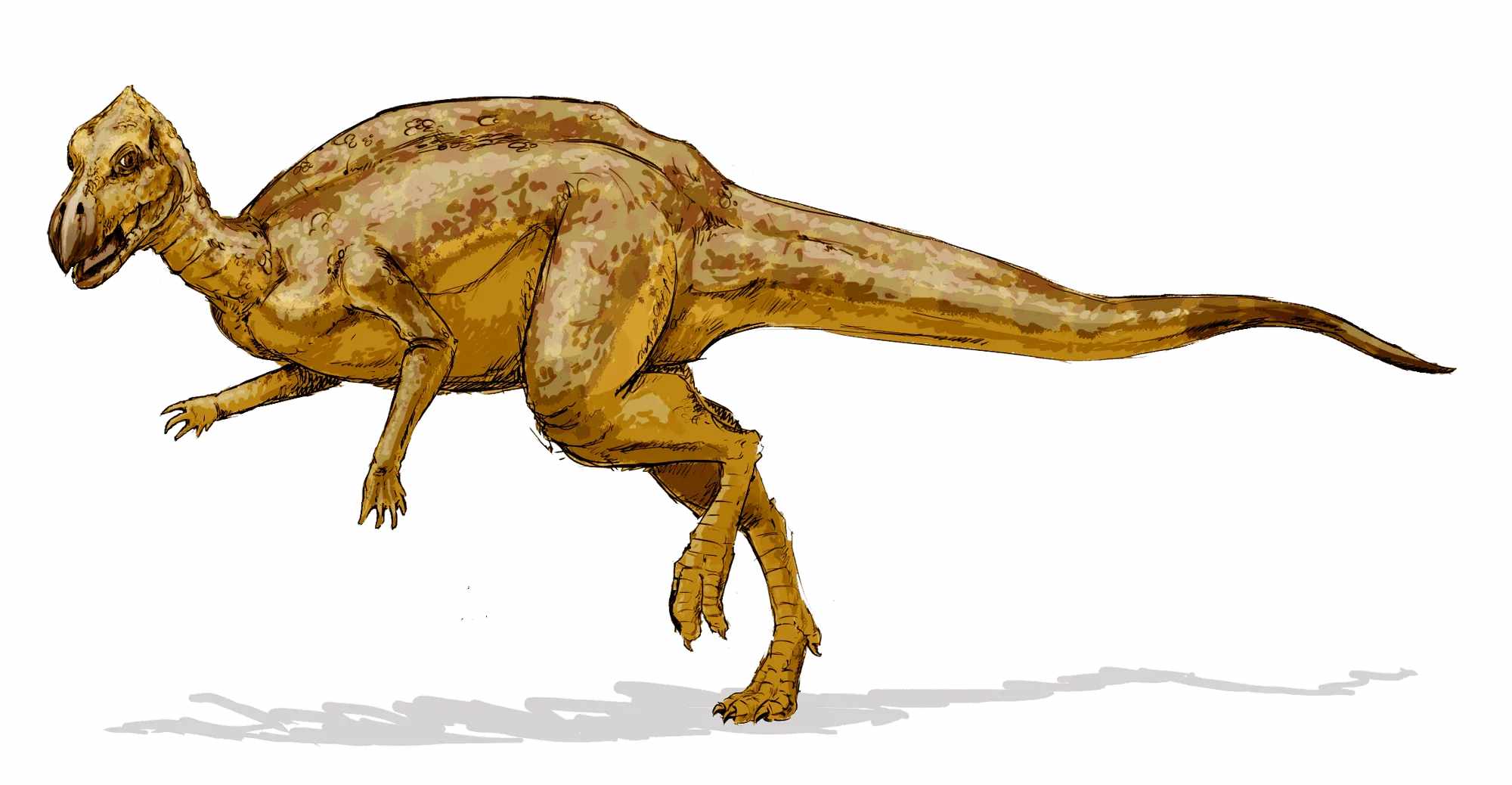 Zalmoxes was a medium-sized dinosaur of the late Cretaceous period, which existed in Romania about 69 million years ago. This dinosaur was first named by the Hungarian paleontologist Franz Nopcsa in the year 1899. Previously, this species was named Mochlodon robustum, and later on, in 1915, it was reclassified as Rhabdodon robustum, a genus of the eurnithopod dinosaur. But again in 2003, these dinosaurs were reclassified as the type species, Zalmoxes robustus, based on the fact that these animals had a heavily built body, weighing almost about 500 lb (227 kg).

Another type of dinosaur belonging to the same species was discovered by the American paleontologist David B. Weishampel, who named them Zalmoxes shqiperorum. The skeleton remains suggest that these dinosaurs were larger in size than the Zalmoxes robustus species. According to Nopcsa, these creatures had a triangular head with a pointed skull. These strong dinos had a narrow beak and the jaws of the robustus species were shorter than that of the shqiperorum. They walked on their three-toed feet. This particular beak modification suggested that it was herbivore in nature and foraged on a wide variety of plants. Keep on reading to know more fascinating facts on the Zalmoxes.

If you liked reading this article, then do check out the acheroraptor and the allosaurus, here on Kidadl.

How do you pronounce 'Zalmoxes '?

What type of dinosaur was a Zalmoxes?

It is a euornithopod dinosaur of the Rhabdodontidae family. It has also been classified under the Dinosauria and Ornithischia clades.

In which geological period did the Zalmoxes roam the earth?

The Zalmoxes roamed the Earth about 69 million years ago during the Late Cretaceous period. Several other dinosaurs like the duck-billed hadrosaurs and the triceratops existed during this period.

When did the Zalmoxes become extinct?

According to Nopcsa, these dinosaurs became extinct 69 million years ago, mainly due to natural disasters, like climate change, forest fire, and rise in sea level. Moreover, these dinosaurs had several predators, like the carnivorous Tyrannosaurus and the savage Spinosaurus, that further contributed to the extinction of this species of Romania, which was always on the run on their three-toed feet.

Where did a Zalmoxes live?

The skeletal remains of these dinosaurs were first excavated from Transylvania in central Romania. The range of both the Zalmoxes type species was found in the Sebes Formation, Sânpetru Formation, and Densuş-Ciula Formation in the Hateg island region.  The first name of this species was given by Nopcsa and later on, Weishampel grouped them under the rhabdodontidae family and named them Zalmoxes. Weishampel was also responsible to name the related species Zalmoxes shqiperorum, after the Albania country. Although their geographical range was not in Albania, history has it that Nopcsa held this country very close to his heart, and therefore, the name of this related Zalmoxes genus was attributed to this country.

What was a Zalmoxes's habitat?

Owing to the fact that this dinosaur was herbivore in nature, we may assume that they inhabited forests, grasslands as well as woodlands, where they foraged on a variety of plants. The climate they preferred living in is not known.

Who did a Zalmoxes live with?

Due to a lack of information, we are unable to assess whether they lived solitarily or in groups. However, other related species of Zalmoxes, that belonged to the same Ornithischia clade and rhabdodontidae family, were known to live alone as well as in small groups.

How long did a Zalmoxes live?

The exact lifespan of this rhabdodon dinosaur is unknown. We do know that dinosaurs that belonged to the Late Cretaceous period lived for about 20-30 years and even more in the case of some species.

This Euonithopod dinosaur reproduced by laying eggs. Their eggs were large in size and were amniotic in nature. The developing embryo received all the vital nutrients from these amniotic eggs. Although we do not know the exact reproduction habit of this dinosaur, we can assume that they protected their eggs from dangerous predators, and therefore, they may have been territorial in nature.

The skeleton of this dinosaur of the cretaceous of Romania had a medium-sized body of length 7-10 ft (2-3 m). This bipedal dinosaur had a triangular head with a pointed skull. It possessed a narrow beak and probably walked on its three-toed feet. The entire skull of the Zalmoxes robustus provided much of the information about this ancient dinosaur. It suggested the presence of a short neck in this species. This particular type of Euornithopod dinosaur was smaller than the related Zalmoxes genus, which was named by Weishampel. They did have teeth but the strength of their teeth is unknown.

How many bones did a Zalmoxes have?

The entire skeleton of this Ornithischia dinosaur has not yet been recovered and therefore, we do not have the information on the total number of bones they had. Several bones have been recovered that helped with the post-cranial reconstruction. The skull and the vertebral bones were found isolated, while no sternal plates. Two dorsal vertebrae and three caudal vertebrae of the sacrum were isolated. Feet and hand bones were not obtained, which resulted in a partial understanding of their anatomy.

No specific information is available on the mode of communication of this dinosaur of the cretaceous of Romania. They probably produced cracked sounds and low grunts to intimidate their predators.

How big was a Zalmoxes?

The length of this rhabdodon dinosaur is about 7-10 ft (2-3 m), and they were way smaller than the ornithopod Tenontosaurus, which was about 21- 26 ft (6.5 -8 m). Another related dinosaur of this genus was slightly larger in size than the Z. robustus, with an average size of about 8.2 ft (2.5 m).

How fast could a Zalmoxes move?

The exact speed of this dinosaur is not known, owing to the fact that most of the feet and hand bones have not yet been excavated. However, we do know that these dinosaurs of the herbivore diet walked on their three-toed feet and foraged on several plants.

How much did a Zalmoxes weigh?

This dinosaur of the rhabdodontidae family weighed about 500 lb (227 kg). They were quite heavily built with medium-sized bodies.

No specific names were given to the male and female Zalmoxes dinosaurs.

What would you call a baby Zalmoxes?

A baby Zalmoxes may be called a hatchling or a nestling because dinosaurs laid eggs.

These dinosaur species were plant-eaters and their diet included ferns, soft shoots, angiosperms, and pteridophytes.

Owing to the fact that the Zalmoxes had a herbivore diet, it is safe to assume that they were not aggressive in nature. However, their robust body and triangular head may have been quite intimidating to the predators.

According to Nopcsa, the Zalmoxes dinosaurs suffered from insular dwarfism, and therefore, possessed a rotund body. It is also suggested that these dinosaurs may have undergone extensive ontogenic growth, that is, they may have changed their diet during their developmental stage. This particular ecological phenomenon had possibly contributed to their heavily-built body.

Were there any dinosaurs in Albania?

The American paleontologist, Weishampel named the related species Zalmoxes shqiperorum, after the Albania country. Although no dinosaur remains were found in Albania, history has it that the Hungarian paleontologist Franz Nopcsa, who was responsible to name this species for the first time as Mochlodon robustum, held this country very close to his heart. Thus, the name of this related Zalmoxes genus was attributed to this country.

What do you mean by the term Zalmoxes?

Here at Kidadl, we have carefully created lots of interesting family-friendly dinosaur facts for everyone to discover! For more relatable content, check out these herrerasaurus facts, or carcharodontosaurus fun facts for kids.

You can even occupy yourself at home by coloring in one of our free printable Dino Extinction coloring pages.